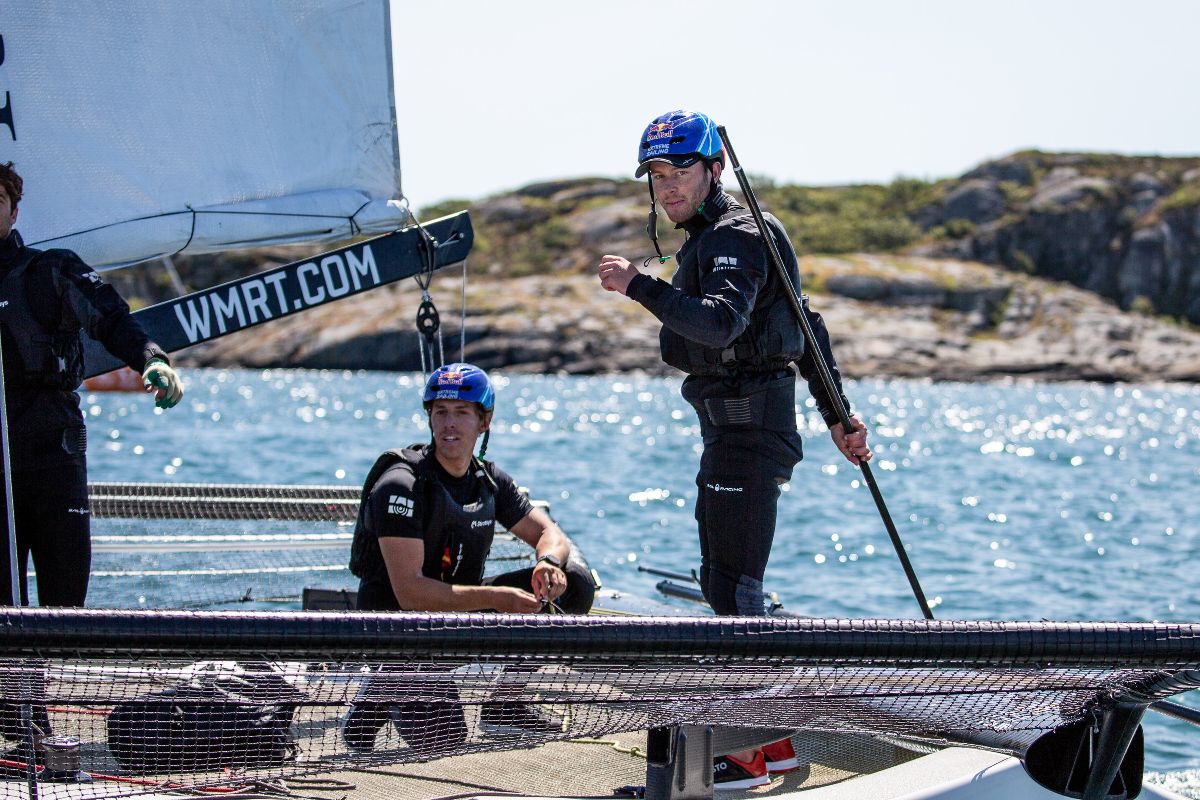 Opening the day’s racing with support from his family sitting high on the Marstrand rocks, Australia’s Harry Price was keen to impress, winning the first race against USA’s Markus Edegran (Team Torrent).

After dropping the second race, Price pulled back to win two straight and close out a 3-1 score to advance to the quarter-finals. Fellow Australian, Mirsky, defeated his opponent and local favourite Johnie Berntsson (SWE) Berntsson Sailing Team 3-1.

The Swedish teams of Måns Holmberg (Stratsys Racing) and Nicklas Dackhammer (ESSIQ Racing) were able to make lighter work of their respective matches against opponents PJ Postma (NED) and Daniel Bjornholt (DEN), both posting 3-0 scores to secure their spots in the quarter-finals.

To decide the pairs for the quarter-finals starting tomorrow, the winner of the earlier fleet race Qualifying, Phil Robertson (NZL),had the first of the ‘picks’ for his quarter final match, selecting Måns Holmberg as his opponent.

Taylor Canfield (USA) US One selected Harry Price for his opponent, saying he chose the Australian because their team was slightly under the weight limit.

However, Price was confident in his response: “We’re keen to race Taylor; I don’t think we’ve actually raced him in the M32’s before. They've also have had a few days sitting around the island, so we are keen to come out firing tomorrow.”

Defending GKSS Match Cup Sweden champion, Yann Guichard (FRA) Spindrift Racing, selected defending Match Racing world champion, Torvar Mirsky, for his quarter final match. “It’s going to be a tough match but the records are in our favour before this, but it will be close, we are looking forward to it,” Guichard said.

The final pairing pits six-time Match Racing world champion, Ian Williams (GBR) GAC Pindar, against ESSIQ Racing’s Nicklas Dackhammer. “We are feeling confident; we have sailed many hours [on the M32] this year so we are feeling good for tomorrow,” Dackhammer commented.

Tomorrow's quarter final racing starts at 10am, with fine weather forecast. The semi-finals and finals will take place over the remainder of Saturday and Sunday, where a record crowd is expected on the island of Marstrand this weekend.

The winner of the event on Sunday will be crowned 2018-19 World Sailing Match Racing World Champion.