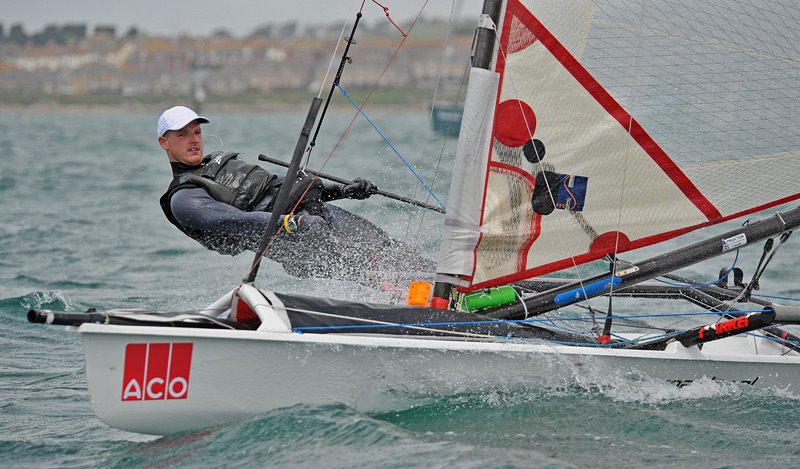 Medemblik is gradually filling up with the sailing acrobats preparing for the ACO 10th Musto Skiff World Championship 2019 in the Netherlands, where some 50 participants are already exploring the competition water and the West Frisian city on the IJsselmeer.

After the two practice races on Saturday, the first starting gun will be fired on Monday 8 July 2019. A total of 111 sailors from 11 countries pre-registered.

At the moment, the registrations and boat measurement are in progress. While reigning world champion, Jon Newman (AUS), is putting event stickers on his equipment, he is talking about his expectations: “Of course, I want to prolong my title, but the competition is fierce.”

Bruce Keen (GBR), just like Newman, already has two world titles to his name. “Yesterday, I sailed against Jamie Hilton – who won bronze last year – and he is going well,” Keen said.

He also calls Andy Tarboton from South-Africa (winner of the test event in 2018 and Chairman of the International Musto Skiff Class Association) a strong competitor. According to Newman, his preparation has been minimal, as it's winter in Australia at the moment.

Years ago, Bruce Keen competed with his Laser at the SPA Regatta, so has had a taste of racing on the IJsselmeer. He is keen on winning his third title, but very humble at the same time: “There are so many favourites out there,” he said.

Over the past 18 months, Dutch hope Paul Dijkstra has prepared thoroughly. He has lost 8 kilograms, trained with the other Dutch sailors from nearby Andijk, and sailed many events.

For the time being, the sailing conditions seem to provide an all-round championship. Co-organizer, Sijbrand Jongejans (NL): “The forecast now is for the wind to vary between 8 and 16 knots and the direction between west and east, turning over north,” he said. “This way the fleet can slowly get used to the IJsselmeer chop.”

According to Jongejans, who also participates, a north/north-easterly wind makes it really tough. “You plane upwind, and with that wind direction you will face waves against you. You have to steer the boat well over the waves and not through them.”

Jongejans’ wife and only female participant in the Worlds, Elaine Turner (GBR), adds: “Downwind is also a challenge, because you can easily nosedive.”

On being the sole women in the fleet, Turner says: “I have advantages and disadvantages, but due to height and strength, not gender. The boat is fun to sail, and thus a great day on the water isn't just about the result. I'd like to think that by being here I might inspire more girls to go sail bigger boats.

There are a total of 14 races scheduled. On the final day, Saturday 13 July, the fleet will be racing twice to determine the final podium places. There will be one starting line, so there is no qualifying series. Jongejans explains: “We held a poll on Facebook, which showed that the sailors almost unanimously opted for one starting line. As a class, we like to sail together.”

The ACO 10th Musto Skiff World Championship 2019 is hosted by RYC Hollandia in conjunction with the International MUSTO Skiff Class Association. It can be followed via www.10thmustoskiffworlds.com