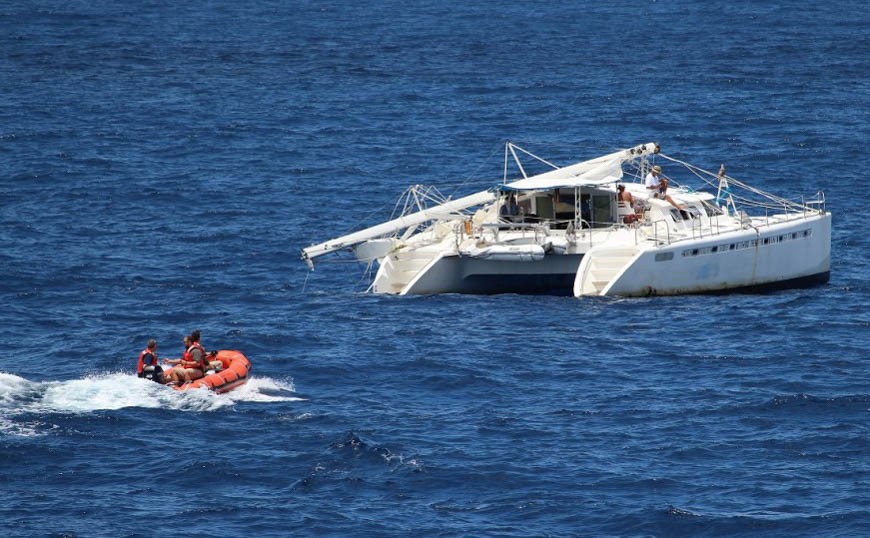 Scientists go to the aid of the disabled catamaran. Photo courtesy of Dominik Zawadzki.

The Duke Chronicle. By Shannon Fang

A research trip recently turned into a rescue mission for Duke scientists.

The research cruise, the R/V Sally Ride, approached a ship stranded at sea in the equatorial Pacific. The catamaran had a broken mast, one working engine and was low on fuel. The two men on board had survived only on rice and fish from the ocean for two weeks.

The researchers on the Sally Ride are geochemists and geophysicists from Duke and other institutions around the world. During their month-long expedition, they are collecting samples in the Cocos-Nazca spreading center—where tectonic and magmatic processes occur—to study how oceanic crust is formed.

Two days before the rescue, the Sally Ride received a message from the U.S. Coast Guard that a vessel 140 miles northwest sent out a distress signal. The sailors were short on fuel, food and water, and the Sally Ride was the closest ship available to help.

After learning that the vessel ran out of fuel and suffered a broken mast, Captain David Murline decided to delay their work in order to assist the distressed boat. Second-year doctoral student Benjamin Wernette wrote in an email that everyone on board was eager to help.

“Helping other mariners in distress is a long and deep tradition at sea reaching back to ancient boats that sailed from island to island,” Wernette wrote in the expedition’s blog post. “According to the United Nations Convention on the Law of the Sea, mariners have a duty to assist persons in danger at sea.”

The broken ship was a catamaran that a pair of French nationals were transporting from Tahiti to Cancun. Only one engine was functioning and the catamaran was going in circles. The Sally Ride's Captain and crew sailed 12 hours to reach the ship. They spotted the ship at 1 p.m. April 30 and formed a plan to help the catamaran.

“I wouldn’t say that anyone on our ship was nervous,” Wernette wrote in the email. “The Captain and Crew are well-trained and prepared for any scenario imaginable.”

Because communication with the boat was limited, one of the crew members used a rescue boat to be ferried to the distressed catamaran.

The two sailors, Herve and Leo, were relieved upon the Sally Ride’s arrival, Wernette described. While they do not know what happened to the catamaran afterwards, Wernette said that they should have had enough fuel to make it to their destination.

“The boat was clearly in trouble. With little means of communication and over 1,000 miles from the nearest landmass, their prospects were bleak,” Wernette wrote. “Everyone, science party and crew alike, was happy to spend the day helping the sailors.”