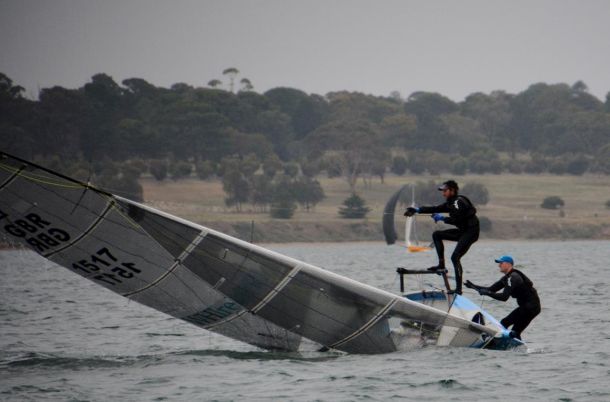 The second day of racing of the 2015 International 14 World Championship is shaping up to be a great day of competition on Geelong's, Corio Bay. The second race of the series is scheduled to start at about 2pm in a 10 to 15 knot southerly.

This morning's overcast conditions will do little to dampen the enthusiasm of the 67-boat fleet, particularly the British who hold the top five places after Race 1.

One team who expect a kinder day today are Ben McGrane and James Hughes. They finished third yesterday even after some man-made and some locally-made problems. They knew they were sailing slowly, but initially couldn’t understand why. “It was the packing (in the centreboard). It pulled away on one side. It was a bit of drag. “There was also weed everywhere and jelly-fish,” McGrane said.

Apart from these distractions the changing pressure of yesterday was quite manageable for this young team. In fact Hughes said they really enjoyed the challenge of having to change gears.

This crew can’t do much about the weed and jelly-fish, but at least they can be aware and know it will affect everyone in the fleet. So, take away the centreboard problem and bring on a steady southerly on the flat water of Corio Bay and this team could well sitting atop the ladder by the end of today.

In the Australian Championship which is being run in conjunction with the World Championships, West Australia’s Brad Devine and Ian Furlong hold first place.