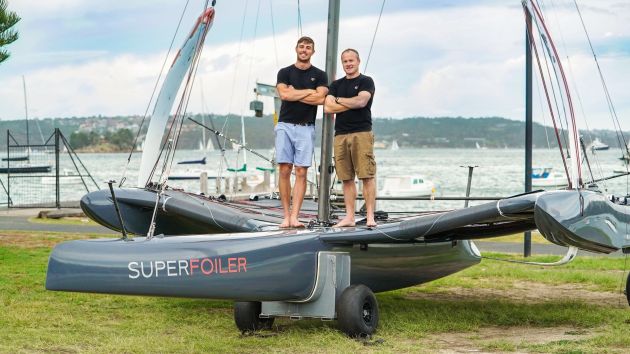 Iain Jensen and Glenn Ashby on the SuperFoiler.

(Sydney) Three of the world’s best sailors will line-up on Australian waters for the first season of the SuperFoiler Grand Prix circuit.

“It is an exciting beast,” says the America’s Cup winning skipper and recently crowned Australian Sailor of the Year, “The SuperFoiler looks to the future of our sport as the most innovative and exciting sail racing machine in the world today. Six of these boats hurtling around a two-kilometre course will make for thrilling sailing and spectating.”

For World champion and Olympic gold medallist Iain Jensen the SuperFoiler circuit presents a unique opportunity – “I am keen to support a project that puts Australia back on the world map. Leading the way and pushing the limits.”

The chance to learn off his America’s Cup nemesis Glenn Ashby, another intriguing side plot. “Last time I sailed against him it didn’t go so well for me. It will be great to have Glenn on my team,” adds the 29-year old, “Hopefully the old boy can teach me a thing or two.”

SFGP CEO Bill Macartney believes it is the best Australian sailing line up ever assembled to race on home waters, and that more world class sailors are close to signing on.

“These machines reinvent sailing, and will bring a new audience to the sport,” says Macartney, “Given the breakneck speeds they reach we need the world’s best sailors to control these beasts and there are none better on the world stage right now than these three supremely talented athletes.”

The marquee sailors are hoping to use the sleek foiling monsters to bring a new audience to the sport of sailing, “I think there is a genuine analogy between the SuperFoiler Grand Prix and Twenty20 cricket. I hope to see lots of kids and adults connect with what this series has to offer,” says Glenn Ashby.

Round one of the five event series launches in Adelaide on the first weekend in February.

The SuperFoiler Grand Prix will broadcast 24 hours of innovative, immersive on-board sailing content across the Seven Network in 2018.