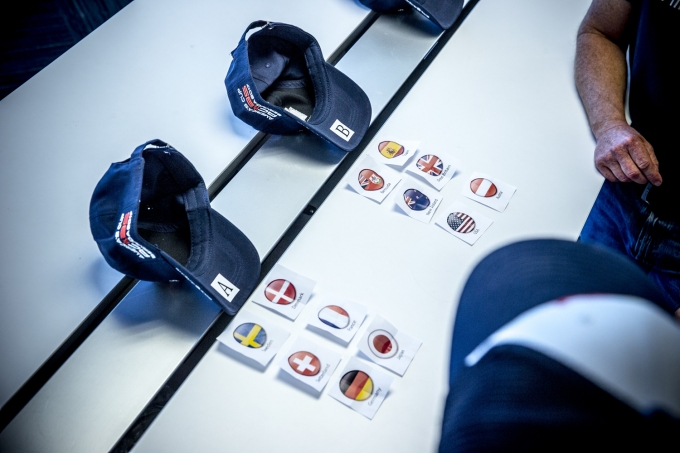 The draw for the Youth America's Cup. Photo Robert Snow.

24 February 2017 – Hamilton, BERMUDA – Two-time Olympic Gold Medalists Roman Hagara and Hans Peter Steinacher have announced the lineups for the two pools of top national youth teams that will compete in the Red Bull Youth America’s Cup in Bermuda this summer. As the Sport Directors for the innovative regatta for sailors aged 18 to 24, the legends from Austria flew to the America’s Cup Event Authority headquarters in Bermuda’s capital city, Hamilton, to make the blind draw among the 12 teams that had already been named to the event, with results as follows:

Hagara explained the regatta format for 2017: “There are six sailors per team, and six teams per pool,” he stated. “In the Qualifiers this June, the top four teams from each pool will advance, and we’ll have a total of eight boats at the starting line in the Finals, which is a lot. They’ll sail the same racecourse used by the America’s Cup teams, so it’s going to be a big challenge and a great opportunity to learn and prove themselves.”

Hagara and Steinacher are the masterminds behind the Red Bull Youth America’s Cup, which was introduced in 2013 as a career pathway toward the America’s Cup itself. Eight sailors from that debut have gone on to professional careers, including Peter Burling, the 2016 Olympic gold medalist who will take the helm for Emirates Team New Zealand in the upcoming America’s Cup, and his teammate Blair Tuke.

In 2017, for the first time the Red Bull Youth America’s Cup will use foiling catamarans – high-speed AC45F boats that are longer than a city bus and literally rise above the water on foils to fly at speeds over 35 knots (65km/h). They’re the same boats raced by the professional sailors in the Louis Vuitton America’s Cup World Series.

“The pools look quite equal, and I think it will be mistakes that prevent teams from advancing out of the Qualifiers. However, the British team [Land Rover BAR Academy] is a big favorite because they have experience sailing a foiling catamaran, the GC32, in the Extreme Sailing Series,” said Steinacher, referring to the global stadium racing circuit where some of the world’s top sailors race the lightning-fast boats on short courses close to shore. “But we’ll see. It’s not easy to be the favorite.”