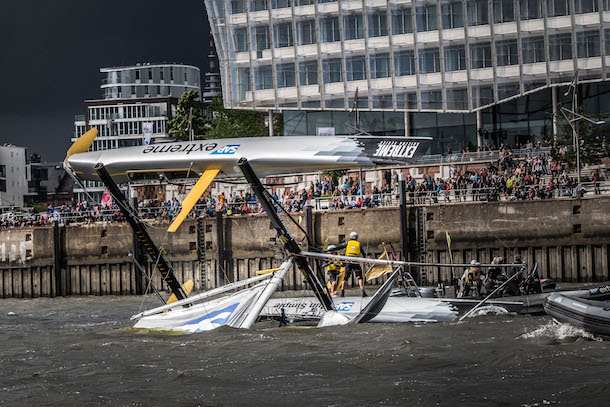 Day three of the Extreme Sailing Series Act 5, Hamburg presented by Land Rover saw five dramatic races squeezed in between thunderstorms blowing over the River Elbe off the HafenCity waterfront.

Pushing the boats to their limits, the final race of the day showed just how testing the conditions were, as Danish SAP Extreme Sailing Team were caught out by a huge gust midway through a gybe on the final downwind leg, resulting in a dramatic capsize in front of the crowds.

The safety team was immediately on site to provide assistance for co-skippers Jes Gram-Hansen and Rasmus Køstner and with all of the crew uninjured, quickly set to work to right the boat, sustaining only minor damage in the form of a broken jib baton, an easy fix before tomorrow’s final.

“It was a scary moment. We were trying to de-power for the massive gust on the downwind to the finish line but we didn’t manage to; the bow went down, the rudder came out of the water and I lost control of the boat and we flipped over”, said skipper Jes Gram-Hansen.

Despite the drama, the Danish team are top of the leaderboard ahead of tomorrow’s final day of racing, overhauling overnight leaders Gazprom Team Russia who struggled with boathandling today in the stronger breeze. A series of mid-fleet finishes dropped the Russian crew back in the overall standings to third, with The Wave, Muscat in second, just one point off SAP Extreme Sailing Team.

With ominous black clouds on the horizon and the rumble of thunder in the background the theme of snakes and ladders continued for most of the fleet.

“Today was life at the extreme, it was what the Series is all about; it was lively, hectic and kept me on my toes,” explained Oman Air’s helm Stevie Morrison.

Taking two race wins each, Oman Air and Red Bull Sailing Team were the most consistent crews of the day, but both have some work to do to reach the podium on the final day tomorrow.