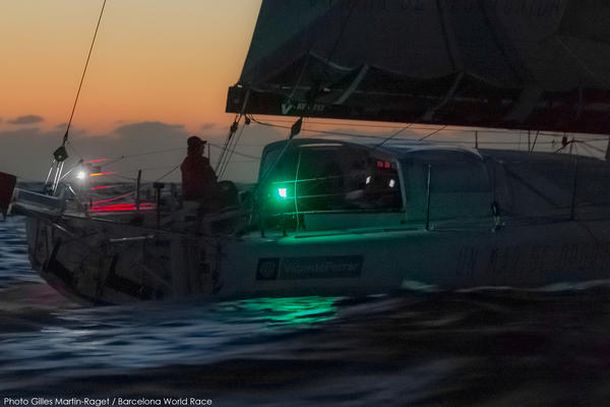 A new record for the 538-mile opening passage from Barcelona to Gibraltar was set by Alex Thomson and Pepe Ribes when they exited the Mediterranean on Hugo Boss on Thursday evening, leading the Barcelona World Race. But their passage into the Atlantic proved problematic when they then hit two unidentified objects and hooked a net around their keel in strong winds and muscular seas.

The English-Spanish duo had no choice but to sail through the hours of darkness, at speeds which they reported to their technical team were 30 per cent less than they should have been.

Early this morning, once the seas had eased slightly, Thomson and Ribes completed a more satisfactory back-up and shook off the debris. Having lost some hard-earned miles they dropped to fourth on this morning’s leaderboard, in part because they held on to a more northerly position diverging from the direct course. But by afternoon today – rather ominously for their opposition ­– the silver-hulled Hugo Boss is back up to second place, some five miles behind Franco-Swiss duo Bernard Stamm and Jean Le Cam on Cheminées Poujoulat, who still lead.

Hugo Boss marked a new race time to Gibraltar at 2 days 5 hrs 50 mins, reducing the 2011 record of Jean-Pierre Dick and Loick Peyron  by 26 hours and 5 minutes.

Six boats of the fleet of eight IMOCA 60s have passed Gibraltar and are into the Atlantic this Friday afternoon. Neutrogena (Guillermo Altadill and Jose Munoz) were second out, only 1h 43m behind their team-mates from the 5 Degrees West stable, with Cheminées Poujoulat breaking the 5 deg 37 W line some 26 minutes after them – both about 1.7 to 2 miles off the Tarifa coast. GAES Centros Auditivos entered the Atlantic next, before Renault Captur this morning at 0517hrs UTC, 11 hours and 27 mins after the leaders.

With the fleet relatively compacted through the very narrow opening formed by the Straits, it is no surprise that it was not just Hugo Boss which reported problems with debris in the water. Anna Corbella and Gérard Marin on GAES Centros Auditivos also hooked unidentified material. Four years ago, when competing with Dee Caffari in the second edition of the race, Corbella had to swim off GAES Centros Auditivos to remove weed and ropes in the same area. She said this morning:

“I don’t know if the other boats have hit so many objects. We don’t know what it was, because it was at night and we could not see, but we have hit some six different things: tree trunks or whatever. We got things stuck to our keel… and our rudders have a system by which they pop up when they hit something and we have had a few hits there in the middle of the Straits, when it was quite windy. I can tell you, that was fun!”

The top three boats were within six miles of each other this afternoon, with GAES Centros Auditivos dropping back to 29 miles behind the leaders. In fifth Renault Captur also had their rudder kick up in the Straits, momentarily losing control in strong winds of more than 30kts.

“We had just furled the big gennaker and were sailing with only one rudder because the other was up, and that was the moment that this rudder decided to come up too, so the boat luffed up into the wind. Fortunately nothing was broken and it was all quite stable. We just had to put the two rudders back down and to get sailing calmly with the winds at 33 knots, running right on the limit of gybing, to get past a tanker which we were talking with quarter of an hour before.”

The race committee has filed a protest after Renault Captur failed to follow the correct course through the Straits, with investigation pending.

In eighth Nandor Fa (HUN) and Conrad Colman (NZL) on Spirit of Hungary have to deal with the fact they are being left behind. They have no choices since they have been snared in the Alb oran Sea by very light winds. Unfortunately for them, and One Planet One Ocean Pharmaton (Aleix Gelabert and Didac Costa) in seventh, the high pressure area is likely to expand with them, and slow their departure from the Straits yet further. Colman was putting his bravest face on when he spoke on the Video Conference this morning:

“There is nothing we can do… There has been a big difference between what we have seen on the GRIB (weather) files and what we have had. Where it said eight knots we have had two if we are lucky.”

His co-skipper explained: “We were too conservative at the start, sailing with the reacher when we should have had the A3 gennaker up, but that was the way it was, and we went too far east.”

The troubles the duo have now – 300 miles behind the leaders – are understandable considering their lack of time with the boat which Fa designed. In fact it was only re-launched six weeks before the start and this is its first ever race of any type. The partnership came together as the boat was launched and, although they have four circumnavigations between them, are struggling to come to terms with the early losses such as the cruel Mediterranean can deliver.

“[Pepe and I] had a difficult night, hit 3 objects hard passing the Gibraltar Straits, then got a net round the keel. We backed down in 30 knots and big waves with ships all around but could not shift it. Sailed all night 30% slower. [We] managed to reverse off the net this morning when wind and waves were less. Very costly but happy to be back on the road.

“We’re very disappointed to have lost the miles we worked so hard to gain, but let's face it, it could have been worse, but a lot of things in the water.”

“Tonight in the Gibraltar Strait we have some problems with the rudder, we hit maybe some trees or something like that – several times. Maybe five or six times we lost the control of the rudders because our rudders come up when they hit something so we were in the middle of Gibraltar Straits with a lot of wind, and a lot of sail, and a lot of traffic, and it was not very funny!”

“After we contacted Tarifa traffic control for permission, the wind was moderate in the beginning but became very strong by the end of the Straits.

“It’s always at these times that everything goes wrong – it’s Sod’s Law. We had just furled the big gennaker and were sailing with only one rudder because the other was up, and that was the moment that this rudder decided to come up too, so the boat luffed up into the wind. Fortunately nothing was broken and it was all quite stable. We just had to put the two rudders back down and to get sailing calmly with the winds at 33 knots, running right on the limit of gybing, to get past a tanker which we were talking with quarter of an hour before.”

“Unfortunately our tactic did not pay off. We started sailing with a different sail than what we should have started with. We wanted to go Easterly to find wind. Well, neither this Easterly direction nor the sail have worked out for us.

“It would have been better to have stayed with a gennaker and running down, but it was my choice to keep the reacher, and we lost the advantage in that time.

“For us, the race starts after Gibraltar. At the moment I have no idea when we’ll get there. We are nearly stationary, there is no wind.”