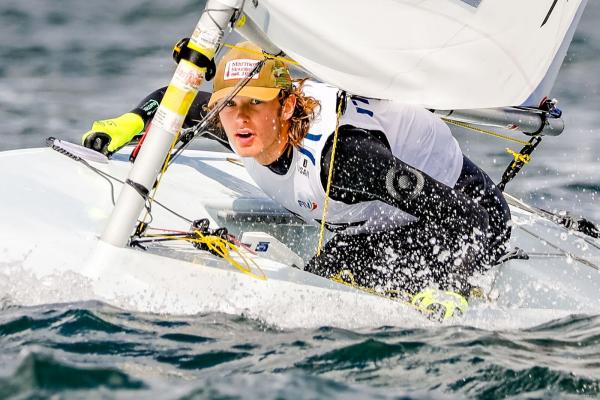 Wind and waves increased quite a bit on Friday, and a storm front approaching Kiel in Germany on the second last day of the Laser Radial Youth Worlds after the first race had finished, but passed as the boats waited it out on the race courses.

“First there were really strong winds, then there was hardly anything left,” Laura Schewe, competitors from Germany said.

With one day remaining, Italy is leading both the Boy’s and Girl’s fleets, by Matilda Talluri, and Guido Gallinaro with two races planned for the final day, tomorrow.

Talluri and Ana Moncada Sanchez (Spain) proved once more to be real all-rounders, showing consistent performances. The top two are on 47 and 50 points respectively. Behind them is Mathilda Nicholls (Great Britain) on 59.

“I had a great start and overtook the Australian girl (Paige Caldecoat) on the downwind,” reported Lillian Meyer (USA) on the first race. “It was a good day, but very difficult to sail,” said Meyer, who is in seventh place.

At the top of the Boy’s fleet is Guido Gallinaro (Italy) in front of Josh Armit (New Zealand) and Francesco Viel (Italy).

Armit is looking forward to the last day, so he can leave a penalty behind him. Amit violated rule 42 (pumping and swinging), giving him a 69 point penalty, which can be used as a discard.

“There was up to 38 knots of wind keeping us busy,” explained Race Organiser, Mandus Freese. Therefore the second race of the Girl’s Gold fleet had to be cancelled after the first upwind.

With the strong gusts, there was also a big wind shift to the right and the warning of an approaching storm front. “So we decided to better cancel and keep everyone together,” Freese said.