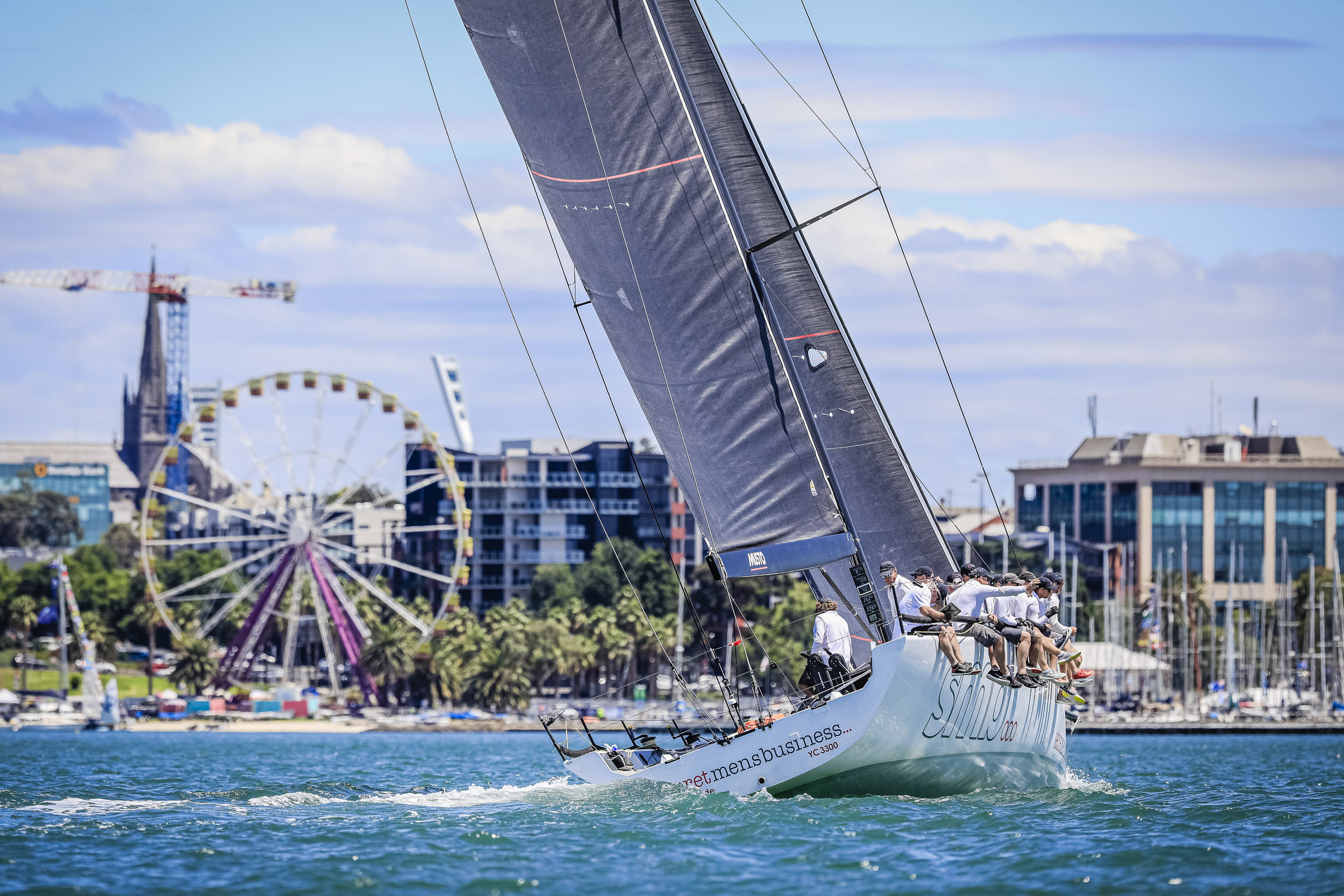 Melbourne turned on a beautiful summer morning for the MacGlide Festival of Sails’ opening event, the Passage Race which began from two long lines at the top of Port Phillip and finished on Corio Bay in Geelong.

Back-dropped by the city, 245 boats of all shapes and sizes responded to the flag signal and the sound of canon fire, popping spinnakers in the light northerly breeze, while those crew without a job sat to leeward and created the best angle of heel with their weight.

Geoff Boettcher’s TP52, Secret Mens Business from Adelaide opened his Festival with a stunning line honours and class corrected time win. Earlier they had dueled with the Geelong Cookson 50, Extasea, owned by Paul Buchholz, opting to go wide to find the advantage and putting daylight between them the eventual second place getter in the line honours results.

“Extasea sprang away from us nicely at the start. It took a long time for us to get him but thankfully we did, around two-thirds of the way in,” Boettcher recalled. “We worked hard for the result; it's not an easy race.”

Deep wind pockets created a lottery scenario and opportunities for the smaller boats to bat above their size. Local Mocean, Stuart Richardson’s RGYC-based Farr 40, was up with the RP46 Hartbreaker for most of the 32 nautical mile race, then powered away to finish third over the line, astonishingly ahead of three TP52s.

Michael Martin’s crew on the 52-footer Frantic from Newcastle, NSW, gave themselves an extra time penalty when they ran aground in the narrow channel that divides inner and outer Corio Bay.

First multihull to finish was another interstater, Michel Van Der Zwaard’s Extreme 40, Back in Black sailing for the Multihull Yacht Club Queensland.

“It was really light for us and we struggled; we’ve had better days,” said the skipper. Cruelly, the breeze picked up for their final mile and they crossed the finish line off RGYC doing 19 knots, hyper-speed compared to the 2.5 knots they averaged for the first four hours of the Passage Race.

Boats clustered then spread across the course as the breeze fluctuated and shifted from north to south and then around to the east. Late afternoon there were 80 boats abreast coming into the Hopetoun Channel, an extraordinary sight for those enjoying the shoreside fun of the Australia Day long weekend.