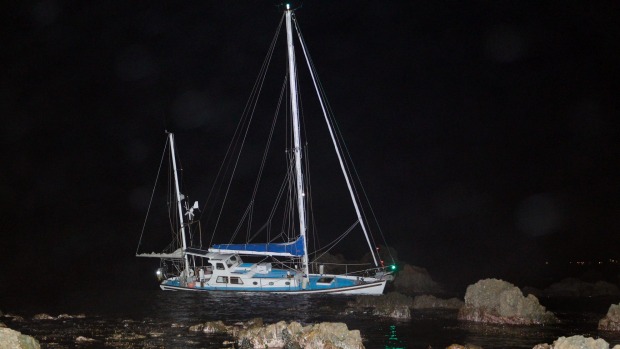 An elderly yachtie thought he was sailing through Wellington Harbour heads before his yacht crashed into rocks at Moa Point.

What was a rescue operation on Monday night off the south end of the Wellington Airport runway had become a likely salvage operation on the live-on yacht by Tuesday morning.

Salvagers now face a race against time to rescue the yacht before a southerly comes through which could smash the wooden boat to pieces of the rocky coastline.

Thomas Cootes, who lives at Moa Point, had spoken to the elderly yachtie who had lived on the now “pretty-well stuffed” yacht.

The sailor had been relying on a mate's incorrect information and thought he was sailing into Wellington Harbour about 8pm on Monday, but instead was coming into the rocky stretch of coast at Moa Point.

“It's like any point around Wellington – when it's lit up at night you get confused.”

It was understood this was despite the yacht being equipped with navigation equipment, including a global positioning system.

When he realised he was in trouble, he tried sending out a mayday call but couldn't get reception and hit the beach. He put the yacht in reverse, hit rocks, and “it was all over”, Cootes said.