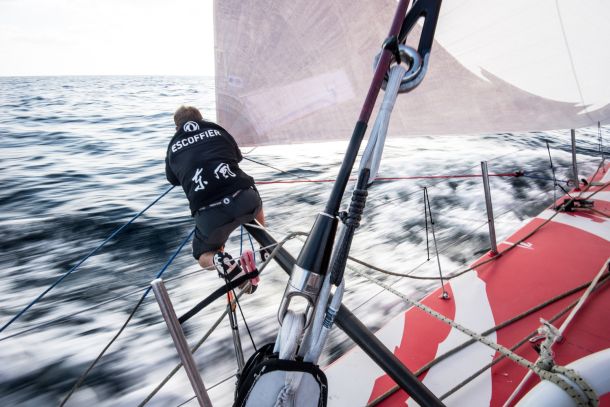 ALICANTE, Spain, January 8 – Dongfeng Race Team were battling on Thursday towards the opportunity to make Volvo Ocean Race history as Charles Caudrelier's (FRA) crew continued to defy the odds at the head of the fleet. The experienced French skipper’s race squad includes no less than six rookie Chinese sailors and very few observers had considered them among the pre-race favourites at the beginning of the 12th edition.

A pair of narrow runners-up places in the opening two legs has left them tied at the top of the standings with Team Brunel (Bouwe Bekking/NED) and Abu Dhabi Ocean Racing (Charles Caudrelier/FRA), however, on four points apiece.

In the third leg between Abu Dhabi and their home port of Sanya, the Chinese-backed boat is currently showing the rest of the fleet that its flying start is no fluke. After five days of sailing and 948 nautical miles (nm) of the 4,670nm leg behind them, they protected a narrow lead of 8.5nm over Team Brunel on Thursday (0940 UTC).

There is still a long, long way to go, including the very hazardous Malacca Strait, but victory in Sanya would put Caudrelier’s crew in the 41-year-old race’s record books as the first Chinese boat to win a leg. Additionally, of course, they would take the outright lead going into the fourth leg to Auckland.

It has been relatively slow going since the fleet – minus the damaged Team Vestas Wind – set sail for Sanya on Saturday from Abu Dhabi. Their progress has not been assisted by repeated hold-ups caused by ocean garbage, such as plastic bags and other debris, which has needed to be cleared from the keels by the sailors. Team Brunel even had to remove a snake, which had wrapped itself around the sail drive.

Abu Dhabi Ocean Racing (Ian Walker/GBR) lie third, some 12nm behind Team Brunel, with Team Alvimedica (Charlie Enright/USA) sandwiched behind them but ahead of MAPFRE and back markers, Team SCA (Sam Davies/GBR).

The women’s crew, boosted by their win in the Abu Dhabi In-Port Race, are by no means out of the leg, however, and are only 37.9nm behind Dongfeng Race Team.

“Out here, on Leg 3, life is always changing,” reported their onboard reporter Corinna Halloran. “You can’t get too comfortable. This is only the beginning so it’s hard not to get too excited by the small gains, and on the flip slide, beat yourself up for the small losses. We just have to continue to sail our best against the other boats and stay with the fleet.”

Meanwhile, the long campaign – 'A Race We Must Win' – for Team Vestas Wind to re-enter the race by the time it leaves Lisbon in June was continuing. The boat has been thoroughly examined in a port near Kuala Lumpur, Malaysia, and is now being transported on a Maersk Line ship towards Genoa in Italy where it is expected to arrive on January 25. From there it will be taken to the Persico yard in Bergamo for repairing, with the assistance of Race Sponsor, GAC Pindar.

“Let me be really clear, the boat’s a mess, almost everywhere key structure is broken and this will be not be easy,” said Neil Cox, the team’s shore chief.

The boat was grounded on a reef on St Brandon in the Indian Ocean on November 29, forcing the Danish-backed crew to suspend racing. It was retrieved from the reef just before Christmas and last Friday the team announced officially it planned to return to racing.