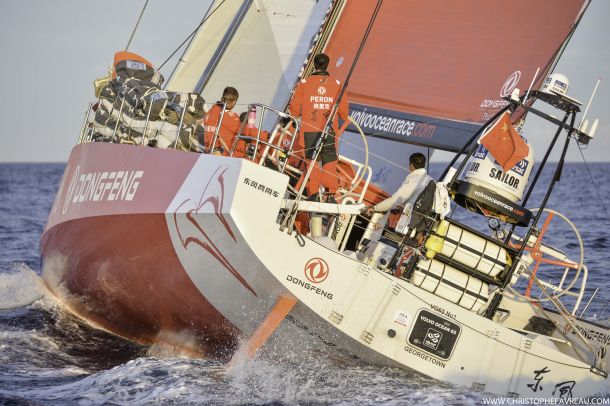 They kept us waiting – you could say more for than six years – but victory surely tasted all the sweeter for that when Dongfeng Race Team nudged gently past the finish line in Sanya on Tuesday morning at just past 0730.

They became the first team from the world’s most populous nation in the 41-year history of the Volvo Ocean Race to win a leg – and with it the outright lead of the 12th edition itself with three of nine legs completed before the finale in Gothenburg on June 27.

And they couldn’t have chosen a better place to make the breakthrough for China: their homeport of Sanya, Hainan Island, on the very southernmost tip of the country where their many fans waited patiently for hours on dockside to welcome home their conquering heroes.

The first two teams both staged spirited, never-say-die campaigns but neither of them really troubled the leaders of the fleets in the races they competed, let down by under-performing boats.

They signalled their intent in this 12th edition, from the outset on Leg 1 and but for a herculean effort of concentration and focus from Ian Walker and his Abu Dhabi Ocean Racing crew, they might have pickpocketed victory in the opening stage from Alicante to Cape Town.

Maybe it was a fluke – after all, few had suspected back in October that Charles Caudrelier’s mixed crew of Chinese rookies and French newcomers to the race – plus Sweden’s Martin Strömberg for good measure – could seriously challenge the pre-race favourites.

Well, Leg 2 showed emphatically that this was no flash in the pan. Another narrow second place, this time behind Team Brunel, in the stage from South Africa to Abu Dhabi proved the point: Dongfeng mean business. Winning business.

Their four points for two runners-up spots left them right alongside Abu Dhabi Ocean Racing and Team Brunel as overall race leaders and Leg 3 has now put their noses in front.

Beforehand, the skippers all talked about how tough the 4,670 nautical mile third stage to Sanya was going to be. Full of hidden perils posed by man-made debris for much of the route and dozens and dozens of huge tankers and tiny fishing vessels to block their way.

Dongfeng stamped their authority on the leg virtually from the start and led the fleet – minus, sadly, the Team Vestas Wind which is now on its way for a rebuild in Italy– a merry dance through the Gulf, the Bay of Bengal, the Malacca and Singapore Straits and, finally, the South China Sea in just over three weeks of near-flawless offshore sailing.

Over the final weekend, it looked briefly as if Walker’s Azzam could challenge the dominance of Caudrelier’s crew when they briefly closed to within 10nm on Saturday as they edged along the Vietnamese coast.

But this ice-cool and fiercely determined 40-year-old Frenchman and his team, including two Chinese rookies ‘Kit’ and ‘Black’ simply found more pressure in the nick of time and stepped on the gas once more.

In the end, victory was an emphatic 50nm or so as dawn broke on a glorious Sanya morning.