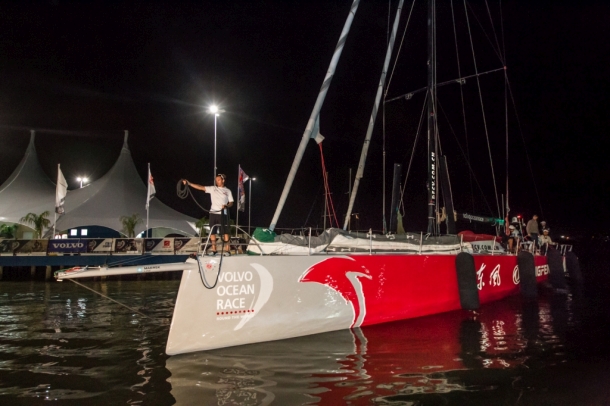 Dongfeng Race Team (Charles Caudrelier/FRA) breathed a huge sigh of relief on Monday after the boat arrived in Itajaí right on schedule ready for the refit of a new mast.

It has been a long journey for the stricken boat since the top of its mast fractured 200 nautical miles (nm) from Cape Horn in heinous Southern Ocean conditions on March 30 during the treacherous Leg 5 from Auckland to Itajaí, south-east Brazil.

Suppliers, Southern Spars transported a new mast from Dubai, via Amsterdam, to Brazil and despite some major logistical challenges, that had arrived safely too by Sunday.

The boat itself was sailed by a shore crew team plus two Chinese sailors under jury rig, partly under motor, for 2,000nm through the Southern Ocean and South Atlantic for its rendezvous in Itajaí with the new mast.

It had earlier found refuge in Ushuaia, Argentina, following the breakage.

Volvo Ocean Race Boatyard chief, Nick Bice, and his team will be working flat out with the Dongfeng Race Team shore team to ensure the boat is in optimum condition for the weekend’s Team Vestas Wind Itajaí In-Port Race on Saturday.

The ambition is to have the boat back in the water by Thursday with the new rig fitted and any other minor repairs carried out.

“Today we know we’ll be ready for the next leg,” said Caudrelier early on Monday following the boat’s arrival. “Well done to the shore team.”

He continued: “We hope to be ready on Thursday and go sailing in the evening to race on Saturday.

“Breaking the mast was a difficult moment. We lost the joint lead of the race, we lost eight points. Abu Dhabi Ocean Racing (Ian Walker/GBR) are now far ahead and they have a big advantage.

“It will be difficult to come back and we’re close in points with the boats behind – we could very well finish fifth.

“We have to stay focused. We’ll do what we’ve done in the previous legs and we’ll see what happens. Anything could still happen.”

However, as Caudrelier makes clear, there is still all to play for. Leg 6 sets off from Itajaí to Newport, Rhode Island on Sunday, April 19, and three more follow it including the transatlantic trip from USA to Lisbon (Leg 7).