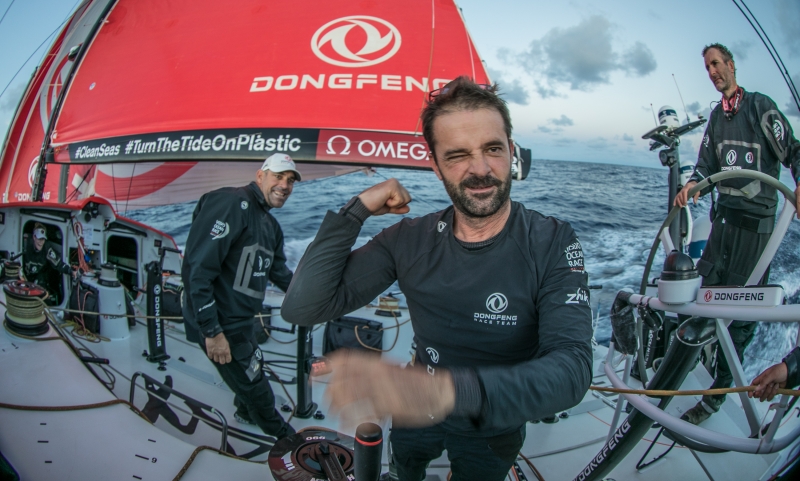 Charles Caudrelier's Dongfeng Race Team was putting on a display of straight-line speed sailing on Friday as the Volvo Ocean Race fleet bore down on the Doldrums.

The Chinese-flagged team had eked out a narrow five-mile lead over rivals MAPFRE, team Akzonobel and Vestas 11th Hour Racing on Thursday – and by 1300 UTC today they had doubled it as they drew level with the Cape Verde Islands
.
As the downwind drag race south entered another day, Dongfeng was also the quickest boat in the fleet, making just shy of 20 knots in 16 knots of breeze due in part to sailing a slightly hotter angle than the others.

However, a 12-mile lead six days into a 7,000-mile leg, while hard-earned, is negligible, especially when in a couple of days' time the fleet will have to face the Doldrums, one of the most tactically important parts of the stage.

“We're about 560 miles from where we expect the Doldrums to start, so really now it's just a drag race south,” said Vestas 11th Hour Racing navigator Simon Fisher, content with their third-place position to the north-west of Dongfeng.

“For now it's all about speed – trying to get south as quickly as we can. Once we get nearer the Doldrums it'll be about fine-tuning our position a little bit and seeing if we can move east or west to have a smoother run through.”

For the first time this race, one team was missing from the tracker today. Turn the Tide on Plastic opted to go into Stealth Mode, whereby their position is hidden from their rivals for 24 hours, beginning with the 0100 UTC position report this morning.

Skipper Dee Caffari said she hoped her team's disappearance from the rankings would score them crucial points in the Leg 2 mind game.

“We are slowly making gains back on Scallywag and Brunel and would like to capitalise on this,” Caffari said.

“I know the concept [of Stealth Mode] was created to encourage us to make some bold decisions and moves on the fleet, but in this case it is just to help plant the seed of doubt into the minds of our competitors as to how much extra pressure we may be enjoying out to the west.”

Team Brunel, in fifth just 35 miles back from the leaders, had to scramble to fix a broken outrigger, the pole which allows better trim for certain sails.

The end fitting sheared off, leaving the thread stuck inside the housing. After several of the team had a go at fixing it, it fell to newly crowned World Sailor of the Year Peter Burling to get the vital piece of equipment back up and running.

Team Sun Hung Kai/Scallywag might be 90 miles behind the leaders in sixth place but spirits remain high on board.

“What still amazes me is the closeness of the fleet,” skipper Dave Witt told Volvo Ocean Race headquarters.

“We're going to go into the Doldrums no more than 50 miles apart from first to last, and in the past we've seen boats lose anywhere from 50 to 300 miles there. This leg is certainly a long way from over.”