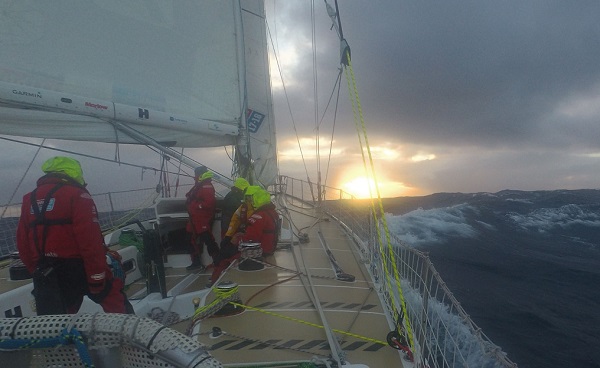 Sanya-Serenity- first to the gate

Sanya Serenity Coast, which has also moved back into first place on the leader board, crossed the northern end of the Scoring Gate at 2103 UTC last night to collect the maximum three bonus points on offer.

Australian skipper Wendy Tuck reports: “Another day, another upwind bash, but at least there was a bit of a silver lining last night as we crossed the Scoring Gate. A large cheer was heard from up on deck as they counted down to the line on the Garmin instrument.

“We are still waiting for the breeze to veer, come more from the right, and then we can ease sheet a bit and sail on a much more pleasant and faster speed.”

Next across was the second placed PSP Logistics. After claiming the two bonus points, skipper Matt Mitchell said: “Good job to Wendo and her Sanya Serenity Coast team for pipping us to the post.

“We are now making exactly bearing to waypoint, meaning VTP (Velocity to Pub) is 100%. The downside is that the wind has dropped somewhat meaning we are going a little slower than we would like. Fingers crossed it fills in for us.”

With just 30 nautical miles separating the third placed Qingdao from GREAT Britain in fourth, the competition for the final bonus point on offer in the Scoring Gate was always going to go right down to the wire. Qingdao managed to remain in front to collect points in the Scoring Gate for a third consecutive race.

And it wasn’t only winning the’ “drag race’ against GREAT Britain that has caused excitement on Qingdao, as skipper Chris Kobusch explains: “Another highlight of the day was the weather forecast, which suggests a change in wind direction over the next 48 hours. Hopefully we finally get the downwind sailing we all expected from the Southern Ocean leg.”

Whilst disappointed to just miss out on the extra points in the Scoring Gate, GREAT Britain is also anticipating the wind change, with skipper Andy Burns adding: “Hopefully we will be getting the kite up over the next couple of days and start eating through the miles again towards Fremantle.”

Skipper Dale Smyth is hoping that trend will continue, saying: “The next few days sees the wind veering slightly and allowing us to point more directly at Australia, and then hopefully a depression with the long-awaited westerlies.”

Behind the eighth placed Unicef, only around 30 nautical miles separates Garmin from the 10th placed Nasdaq. Garmin remains on the most northerly route of all the teams, and skipper Gaetan Thomas reports: “Our bow is pointing towards Fremantle now. In the coming days we will have to negotiate a wind hole, but hopefully we are in a good angle for it, so let's catch the fleet back.”

A wind hole could also be on the cards for the eleventh placed HotelPlanner.com, whose skipper Conall Morrison says: “The wind is decreasing and we are preparing to hoist our windseeker. We are preparing to be overtaken by a high-pressure system which will leave us without much wind for a day or so”

As Clipper Race Meteorologist Simon Rowell reports, HotelPlanner.com will see much better conditions with the next low. He adds: “Those to the north should continue to see an easing and veering in the wind, allowing you to make a better course at higher speed, whilst those in the south should see the ridge move north with the breeze coming aft and picking up.”

Amid all the racing, thoughts on board are very much with those who have served in the armed forces with teams marking Remembrance Day.

Liverpool 2018 skipper Lance Shepherd says: “Today we take a moment to remember all those fallen in the wars of the past and in current conflicts. It seems particularly apt to turn our thoughts to those perished at sea – we thank you for your great sacrifice.”