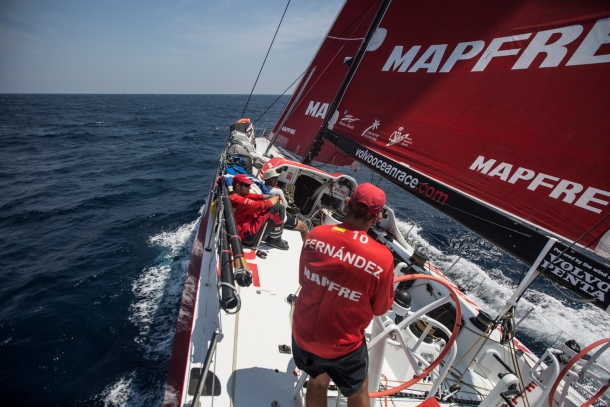 Dongfeng Race Team (Charles Caudrelier/FRA) tightened their stranglehold on Leg 3 as they began their navigation through the treacherous Malacca Strait on Monday with a historic Volvo Ocean Race breakthrough for China tantalisingly within sight.

None of the three Chinese teams to enter the race has ever won a stage in offshore sailing’s most prestigious event but Dongfeng are ideally poised to be the first, protecting a 106.3 nautical mile (nm) lead over MAPFRE (Xabi Fernández/ESP) at 0950 UTC.

A victory, putting them top of the overall standings, is certainly not in the bag despite their very handy advantage.

Caudrelier and his mixture of experienced French solo sailors and Chinese rookies must now pick their way through the Malacca Strait, a 500nm journey that could easily scupper all their hopes before they even reach the final section of the 4,670nm stage through the South China Sea to Sanya.

The Strait, one of the busiest shipping lanes in the world, separates the Indonesian island of Sumatra from Malaysia and is chock-a-block with huge tankers, dozens of tiny fishing vessels and the ubiquitous man-made, floating debris.

In past races, navigators and helmsmen have found themselves dodging discarded refrigerators and rusting washing machines. A collision with such a hazard at speed could cause considerable damage to a Volvo Ocean 65.

Additionally, the winds there are notoriously fickle and Dongfeng could yet be parked in zero wind while the rest of the chasing pack catches up in stronger pressure.

Caudrelier is certainly taking nothing for granted.

“We are happy, of course, to have led for nearly 13 days, but we are also very tense,” he said. “We dream – without thinking too much about it – of being first to arrive ‘home’ but these Straits really concern us.

“The race is, without doubt, going to be decided there.”

Meanwhile, the race 100nm or so behind Dongfeng is really heating up with their chief rivals for the overall trophy, Team Brunel (Bouwe Bekking/NED) and Abu Dhabi Ocean Racing (Ian Walker/GBR), both currently outside the top three.

Their places have been taken by MAPFRE who continue to thrive under the stewardship of stand-in skipper Xabi Fernández, and third-placed Team Alvimedica (Charlie Enright/USA).

At 0950, MAPFRE led Team Alvimedica by exactly 3nm with Abu Dhabi Ocean Racing the same distance behind the Turkish/American team in fourth.

Team Vestas Wind (Chris Nicholson/AUS) are not racing the leg but heading on a transport ship instead for Genoa, Italy, from Malaysia after their boat was retrieved from an Indian Ocean reef just before Christmas. It ran aground there on November 29, causing major damage.

It will be arriving in Genoa on Sunday, January 25, and will then be transported to the Persico boatyard in Bergamo for repairs. The plan is that the Danish team will re-enter the race for the final two legs from June in Lisbon.

The fleet is forecast to arrive in Sanya, Hainan Island on the southern-most tip of China on January 27 or, less likely, January 28.