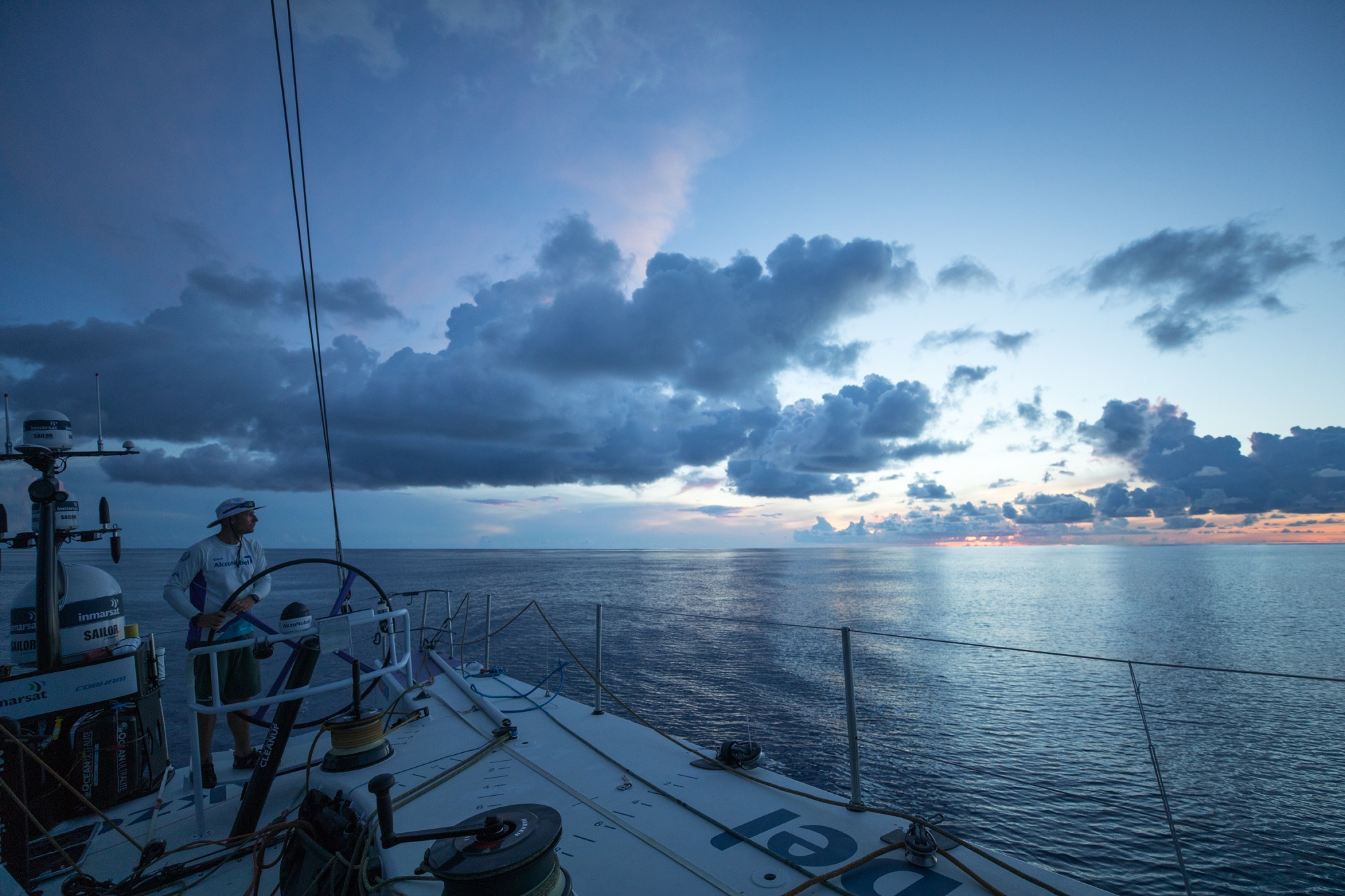 It's a tense time for the Volvo Ocean Race sailors as their torturous days in the doldrums come to a close. But who escapes first will have a serious impact on the final results for Leg 4…

The Volvo Ocean Race fleet was gearing up to jump on the highway to Hong Kong on Friday after returning to the Northern Hemisphere for the first time since mid-November.

All seven teams have now crossed the Equator, and at 1300 UTC were positioned right on the cusp of the trade winds that will fire them towards the finish line.

Once they hook onto the prevailing easterly breeze they can expect steady winds of up to 20 knots – a stark contrast to the tortuous and fluky conditions faced in the Doldrums over the last five days.
It will also spell an end to the constant gybing to avoid clouds that the Doldrums has demanded, replaced with simple and fast straight-line sailing.

Until then though, the teams are contending with squalls and lulls that could yet see the order change.

“Conditions have been really tricky,” said Carolijn Brouwer, crew on Dongfeng. “The wind picked up from four to 11 knots so we started shifting all the weight back in the boat. As soon as we’d finished, the wind dropped again and we had to move it all back. It’s a real dance we have to do.”

At the latest ranking update, Dongfeng, the furthest east team, were in seventh place, but Brouwer said they were confident on board that their position would prove a strong one once they reach the trades.

“In our last sched it didn’t look too good for us. We’re in last place, but from where we are and what we expect, the weather to do that’s not entirely how we see it,” she added.

“We’ve been aiming to get as far north as possible. The first boat to hook into the north-easterly trade winds will get richer, and that’s been our objective. We’re happy to the most easterly boat.”

Itching to rise through the rankings and secure a podium position returning to their home port, Team Sun Hung Kai/Scallywag have gone for the opposite approach, staking their money on a course around 50 nautical miles west of the fleet, effectively cutting the corner on the left hand turn towards Hong Kong.

Scallywag skipper Dave Witt has spoken candidly about his team’s desire to arrive home ahead of their rivals – and after trailing for the majority of the leg he and navigator Libby Greenhalgh chose today to make their move.

As the most westerly boat in the fleet, and therefore closer in distance to the finish line, they shot to the top of the leg rankings and they were among the quickest boats in the fleet at 1300.

Projections suggest that the move could see them end up neck and neck with the other teams when the fleet converges in the coming days.

The return to the Northern Hemisphere also triggered the return of King Neptune, as more ‘pollywogs’ – sailors crossing the Equator for the first time – were inducted into his court.

Twenty one sailors and six OBRs faced the traditional inauguration ritual during Leg 2 from Lisbon to Cape Town.

On Leg 4, those in Neptune’s line of sight included Team Brunel’s Sam Newton, Hannah Diamond on Vestas 11th Hour Racing, Bleddyn Mon and Bernardo Freitas on Turn the Tide on Plastic and Trystan Seal on Scallywag.

With fellow Australian Kyle Langford playing the role of Neptune, Newton was covered with days-old food leftovers before having chunks shaved out of his hair. But with just under 3,000 miles of Leg 4 still to go, Newton has plenty of time to grow his hair back before arriving Hong Kong.