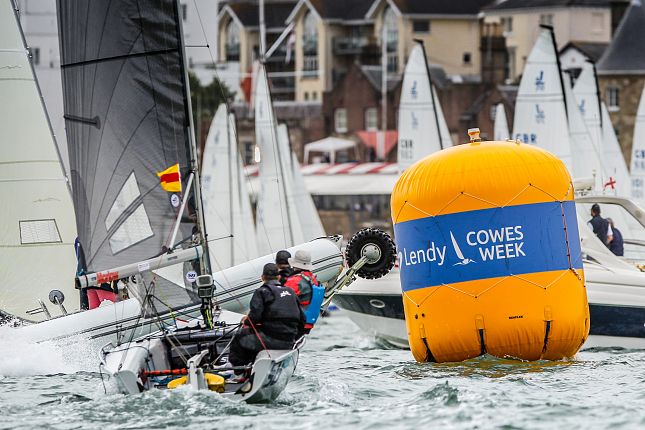 With discard races coming into effect, the overall pointscore position had tightened going into the final day of racing in the SB20 Cowes Grand Slam on England’s famed waterway, The Solent.

After six of the scheduled eight races, Tasmanian entry Porco Rosso has had its lead reduced to just one point ahead of the British boat Xcellent as a result of the discard races reducing their net score.

Porco Rosso, helmed by young Hobart sailor Ellott Noye, has a net 10 points after discarding a third place. However, Xcellent's drop race has been a fifth, giving it a net 11 points. Both boats had a win and a third place on day three yesterday.

Even closer is the duel for second and third. British SB20, helmed by Tasmanian Paul Burnell, and fellow Hobartian MIchael Cooper, skippering Export Roo, are both are on a net 15 points. Marvel had two fourth places, Export Roo scoring 5.5 and 2 points yesterday.

Hypertronics (Stephen Catchpool) is 10th overall after a 13-10 result on day three, Smigger, skippered by Andrew Smith, finished ninth in race five, their best result so far, but a penalty in race six dropped them to a 21st place. Smigger is 16th overall.

The SB20 Cowes Grand Slam is part of the lead-up to the 2017 World championship to be conducted by the Royal Yacht Squadron. Seven Australian boats, six from Hobart, are contesting the 2017 Words

The Cowes Week Grand Slam has given four of these crews the opportunity to understand the waters of The Solent – racing tides, sandbanks and quick changes in weather creating steep short waves.

Australian SB20 class president Stephen Catchpool and other skippers are also using the opportunity to encourage British and European SB20 sailors to come to Hobart for the 2018 World championships next January.

With three Tasmanian SB20s and their crews in the top ten going into the final day of racing in the Cowes Grand Slam it augers well for their prospects in the Worlds.