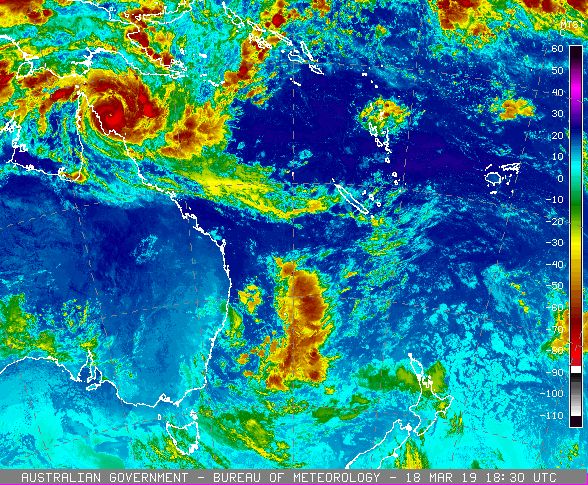 Cyclone Trevor was officially named at 5am on Monday as a tropical low in the Coral Sea intensified overnight into the Category 1 system.

Trevor was expected to move west-southwest before strengthening and making landfall near Lockhart River late Tuesday as a Category 2 system, but on Tuesday morning was upgraded to a Cat 3 system.

Bureau of Meteorology Weather Services Manager, Dr Richard Wardle, said the system will continue to move west-southwest and is expected to move into the Gulf of Carpentaria by mid-week.

“This has the potential to be a protracted event that will see Trevor move slowly towards the northeast coast of Queensland before making landfall late on Tuesday and then moving into the Gulf by Wednesday,” he said. “It is too soon to predict exactly how the system will progress, but models suggest the system may linger in the Gulf until the end of the week.”

Details of Severe Tropical Cyclone Trevor at 4:00 am AEST:

Tropical cyclone Trevor continues to intensify as it moves towards the eastern Cape York Peninsula coast, and has now reached category 3 intensity. The cyclone will continue moving in a west-southwest direction and is expected to cross the coast south of Lockhart River this evening.

Tropical cyclone Trevor will weaken as it crosses the northern Peninsula tonight and Wednesday, but may remain a category 1 cyclone until it enters the Gulf of Carpentaria later on Wednesday. It is expected to reintensify in the Gulf.

The VERY DESTRUCTIVE CORE of tropical cyclone Trevor, with extreme gusts up to 205 km/h, will make landfall between Cape Grenville and Coen late this afternoon or evening.

GALES may develop along the northwestern Peninsula coast between Cape York and Mapoon during Wednesday if Trevor remains a tropical cyclone and takes a more northerly track than forecast.

As the cyclone crosses the coast, a storm tide is expected between Orford Ness and Cape Flattery. Large waves may produce minor flooding along the foreshore. People living in these areas are likely to be affected by flooding and should take measures to protect their property as much as possible and be prepared to help their neighbours.

HEAVY RAINFALL, which may lead to flash flooding, is forecast to develop across far north Queensland over the next few days. A Flood Watch has been issued for catchments north of Cairns to Kowanyama.

People between Orford Ness and Cape Flattery (including Lockhart River and Coen), and between Mapoon and Pormpuraaw (including Weipa) and intervening inland areas, should immediately commence or continue preparations, especially securing boats and property, using available daylight hours.

People between Cape York and Mapoon on the northwestern Peninsula should consider what action they will need to take if the cyclone threat increases, and listen to the next advice at 8 am AEST Tuesday.

– Information is available from your local government.

The next advice will be issued by 8:00 am AEST Tuesday 19 March.