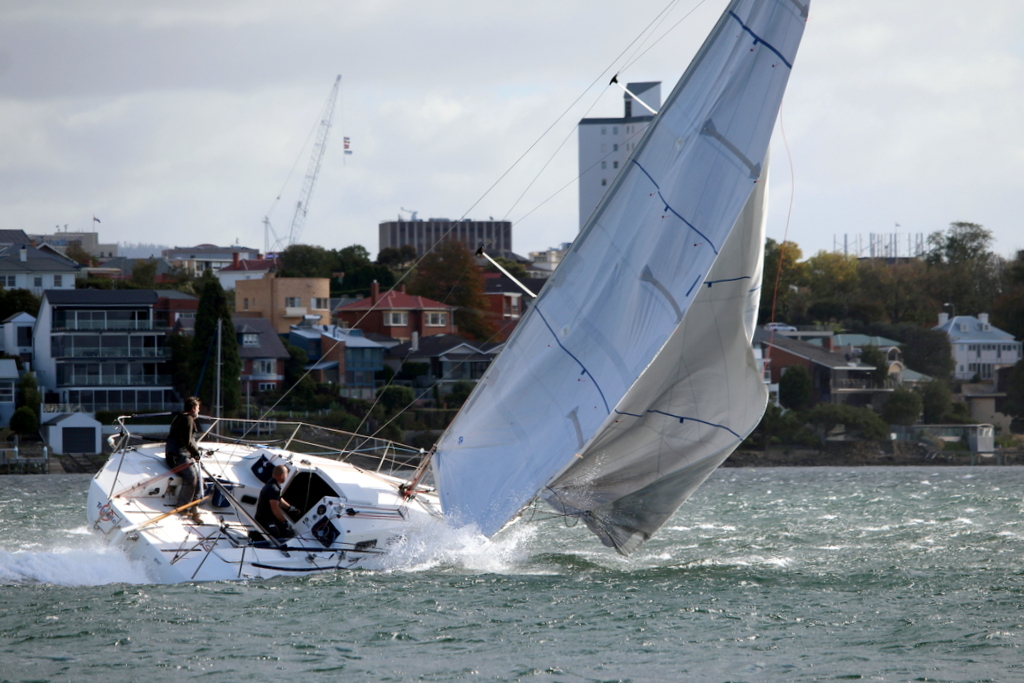 Trouble’s short-handed crew got out of trouble in the SW gust on the Derwent today. Photo Peter Watson.

Southern Tasmania has some unique yacht racing events, such as a series of regattas on the River Derwent and down the D’Entrecasteaux Channel, the circumnavigation of historic Bruny Island and the Autumn Short-Handed Series which began today.

Despite an ominous forecast for the Derwent, 30 of the 38 entries turned out on a chilly and windy autumn Sunday morning, all but three bigger boats crewed by just two sailors.

Father and son crew of Angus and Fynn Sprott were among them, scoring an impressive outright division win on a torrid opening day on the river.

Angus is immediate past Commodore of Sandy Bay Sailing Club while teenager Fynn has moved through the off-the-beach sailing ranks from Optimists to high-performance 29er skiffs.

A fleet of 30 yachts, all sailing short-handed, turned out on a chilly and windy autumn morning for the first of five Sunday morning races. Three divisions sailed with spinnakers, two non-spinnaker, in the shifty south to south-westerly breeze that gusted to 30 knots.

With a dark and gloomy weather forecast for the River Derwent it was with some trepidation that RO Gilbert Leitch sent the fleet of 30 short-handed boats on their way for race one of the series.

“Gilbert showed excellent judgement in keep the course close to the windward shore and when the forecast wind did arrive, halfway through the race with up to 30 knots SW gusts, the yachts had an offshore wind and flat water,” commented Derwent Sailing Squadron sailing operations manager Peter Watson.

“The first three divisions went to the Manning Reef mark, followed by a short reach to the Nutgrove mark and then a wild run downwind to the start mark off Castray.

“It is a tribute to the seamanship of competitors that there were no retirements and no reported major breakages,” added Watson who, as usual, captured the action on his camera.

The Sprott father and son are among several family combinations, including husband-and-wife crews, competing in the Autumn Short-Handed Series, a unique event in Australian sailing.

The Sprotts sailed Sea Temple to victory in Division 4 from Greg Biscup’s King Fisher and Adele, sailed by Ross and Mick Clark.

Division 3 (non-spinnaker) attracted the biggest fleet and saw the closest competition with Jim Thorpe and Peter Smart sailing the Beneteau First 33.7, Hydrotherapy to a 10 second win on corrected time from the Hanse 400e Illusion (David Brett and Sam Johnson).

Sydney Hobart Yacht Race veteran Ed Psaltis and his crew, Graham McKibben, took fastest time and third on handicap with Psaltis’ Sydney 36, Midnight Rambler. Psaltis, who won the 1998 Sydney Hobart, has recently re-located to Tasmania, and this was his first race with the local fleet,

Late entries have lifted the total fleet for the DSS Autumn Short-Handed Series to 38 boats, ranging from the Spacesailor 24, Kingfisher, to the Bakewell-White 39-footer, Wild West.