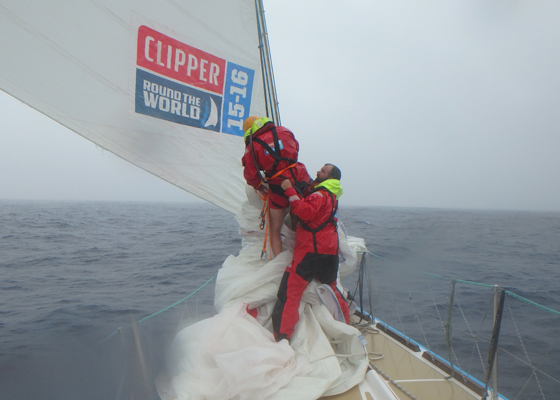 Leader of the Da Nang New Discovery of Asia Race Derry~Londonderry~Doire was the first through the Ocean Sprint course, setting a time of 14 hours 18 minutes, which has consequently proved impossible for the remaining eleven boats to match. Upon Visit Seattle’s completion of the course in a time of 19 hours 7 minutes, pending verification by the Race Office upon arrival in Da Nang, the two bonus points will be awarded to Skipper Daniel Smith and his crew.

Having rounded the southernmost waypoints, Derry~Londonderry~Doire is heading north, crossing paths with teams on their way to the Vietnam virtual mark, and is enjoying the slightly more comfortable conditions, as Skipper Daniel reports.

“Derry~Londonderry~Doire is now pounding into the waves slightly less, increasing our standard of living. The decreased wind strength together with the shelter we are getting from the reefs amongst the area named “Dangerous Grounds” has meant that the waves are lower and less steep.

“This morning we passed Ladd Reef with its metal beacon. Without a decent chart it is easy to see how a boat could end up on there. The chart shows five ship wrecks although I am sure there are more.”

Approximately 80 nautical miles behind is GREAT Britain, closely followed by Garmin in third. Rather than follow the race leader, the pair have turned north slightly earlier, as they try to determine the best route around the various obstacles throughout the course. Peter Thornton, Skipper of GREAT Britain says: “We've been diving through a couple of gaps in the reefs down south, tacking our way up the south side of the race course.

“The winds are a bit shifty in direction (as you can probably tell by our track on the Race Viewer) but it's difficult to know if it's due to the section of water we're passing through or if it’s a general shift across a wide area. The difficulty with positioning at the moment is having to stay relatively close to the track, because we don't know which virtual waypoint will be our turning point, at the same time as trying to take into account current and forecast wind direction. It's pretty good sailing weather out here right now.”

The forecast suggests that the winds should carry on easing and veering east, east-north-east for the next 2-3 days before coming back in from the north-east.

After recently reporting heavy sail and equipment damage, Mission Performance has continued racing having replaced the inner forestay with a spectra rope. This allows the team to fly a full mainsail and Yankee. Skipper Greg Miller says: “The wind has picked up slightly and we seem to be into the double figures with our restriction of sails. This is a good thing!

“With no flying of spinnakers it means that we have time to do a lot of the jobs that would have waited until we got into Da Nang. We are slowly losing our lead over Visit Seattle as expected with them able to fly spinnakers, so the best we can hope for on this race is twelfth place. It is unfortunate but the up side is that we can prep most of the stuff while not pressed with trimming excessively and we can also get the boat properly prepared for the upwind bit that is to come in a few days’ time.”

As you will have noticed on the Race Viewer, with the new course and teams crossing paths, the Current Race Standings table may not always be exact so please refer to the map for more accurate positions.