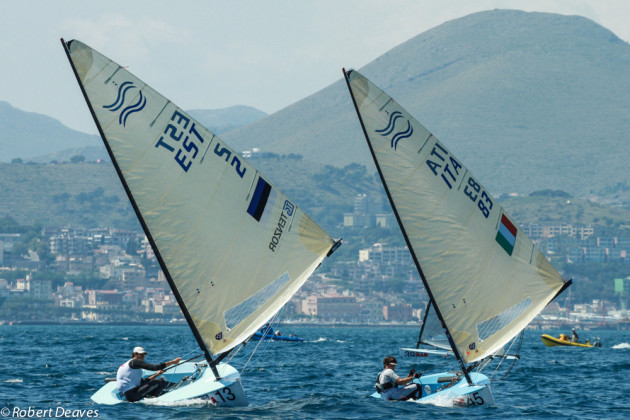 Deniss Karpak (EST) is the early leader at the 60th Finn Gold Cup in Gaeta, Italy, after winning the opening race and then following that up with a third in the second. Giorgio Poggi (ITA) is second, while Peter-Jan Postma (NED) is third. The second race was dominated by Jonas Høgh-Christensen (DEN).

It was a hot and sunny day in Gaeta but the wind generally remained light. After a one hour postponement, the fleet was sent out for a start in 6-7 knots of breeze and it never got much above 10 knots all day.

Race 1 started under a black flag after a number of failed attempts. The right side proved heavily favoured with Matteo Savio (ITA) rounding from the right ahead of Fabian Pic (FRA) and Ulli Kurfeld (GER). Savio maintained his led until the start of the run when Karpak, who had made big gains on the second upwind, caught him and sailed past to take the win. Savio crossed in second with Pic in third.

Karpak said, “It was another beautiful day in Gaeta. It was an excellent day for me. I did great in both races, so I'm happy.”

On his plan. “My plan was just to go to the right. The sun was going right and the wind was going the same direction, and I managed to do that. I crossed to the middle of the first beat and the wind went more right, so instead of top three I was about 12th at the top mark. I caught up on the second beat. The second race was the same. When you are tactically good and fast, races are easy.”

The wind built sightly for race 2 but still no more than 9 knots at the start. The fleet got away first time with the leaders starting at the pin and getting across to the right as soon as they could. Double world champion Høgh-Christensen got it right to lead all the way round. The first downwind was free pumping but the wind dropped and so did Oscar flag. The Dane built a huge lead on the first downwind, but Piotr Kula (POL) clawed it back on the second upwind to round a close second. Høgh-Christensen pulled away on the final downwind for the race win from Kula and Karpak.

Høgh-Christensen said, “It was a tough day in light winds. The first race was going well for me. I got a good start, crossed the fleet and I was working to the left of the fleet, and the wind shifted 5-10 degrees. I tacked on and that was a mistake, as it went further, and I rounded in 65th so that was pretty bad. But I caught back up quite a bit.”

“The second race was similar. I had a good start at the pin, crossed the fleet and went a bit further right and just managed to be first at the top mark. Then on the run I managed to pull out quite a bit and from there I could control the race all the way to the finish.”

“Actually, I thought I had a good day. I missed that one shift on the first race, but otherwise I thought I sailed a really good day.”

On his downwind speed, he said, “I think it was a combination of speed and pressure. There's no doubt I was fast downwind today but I put myself on the right side of the current and the pressure so that helped a lot. I think things are coming together. We have been working hard on getting back up to speed. We've changed a lot of things, actually we changed everything, and lately it has been going a lot better.”

On the week ahead. “Most of the top guys are here. It's 10 years since I first won a world championships, so maybe it's time I did it again!”

The defending champion Giles Scott (GBR) is down in 18th after choosing the wrong side of the first upwind to finish in 38th before having a better second race to cross fifth. He sits in 18th overall. In fact, many favourites picked up one or two high scores during the day.

Two more races are scheduled for Monday with light winds again forecast. Some of the races are being covered with live video on Facebook. Keep an eye on the Finn Class Facebook feed for updates about when we expect to broadcast.