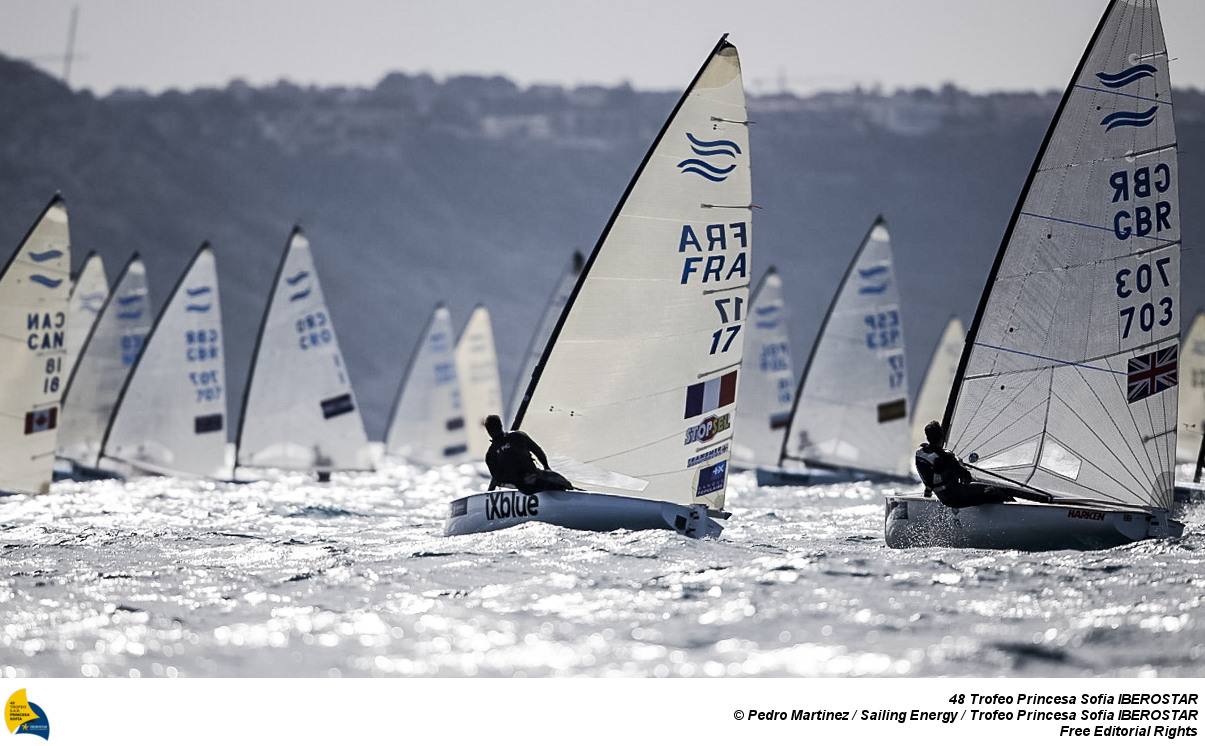 Estonian Deniss Karpak was the most consistent sailor in the 57-boat Finn fleet on the opening day of the 48th Trofeo SAR Princesa Sofia IBEROSTAR in Palma, on Monday. Nenad Bugarin from Croatia is second and Brazilian, Jorge Zarif, is third.

Karpak got away to the best start at with a 3, 2 scoreline, leaving him at the top of the fleet, on a day when many sailors picked up wildly different scores as the wind played tricks with the fleet in the second race.

A medium to strong 15-20 knots in first race rose to more than 20 knots between the races, before dropping from 15 down to 5 knots in the second race.

Karpak said, “It was a tough day, in Palma style. The first one was a regular hike/pump/right tactics race, where if you played well with the wind, hike as much as you can and pump like an animal – you win. I was not so good in all three steps, only in a few.”

He is one of eight sailors from the Rio Olympics competing this week. “Alican and Berecz were the fastest in the fleet. Despite that, I was first after the first downwind, after passing five boats from the left side in more pressure.”

“The second race looked hard and unstable from the beginning, when 70 per cent of the fleet went straight to the left corner, where was more pressure. But, the big shift came from the right.”

On the right were Zarif, Mikael Hyryläinen from Finland, Karpak, and Bugarin. “We played this shift from the middle right position.”

“The downwind was hard with a dying breeze and big holes with no wind. Nenad managed an excellent beat at the right edge to gain his victory. The second upwind was a casino, where no one knew where to go. I went right with Zarif, while Nenad went left, and 75 per cent of the fleet followed me and Zarif.”

“But then the wind went left about 40 degrees and Nenad gained more. Some guys gained about 25-30 boats. One of them was Nicholas Heiner, who went from about 25th to third. Zarif and I were lucky to be far ahead and not to lose our positions. Then on the downwind with Oscar still up, Zarif got yellow flagged for pumping with his boom in the water. That’s why I was second and Heiner third.”

Bugarin is second after the opening the day with a fifth in the first race before his win in the second. One of the youngest in the fleet, this is his first year in the senior fleet. In 2016 he narrowly missed winning the U23 World Championship and is definitely one to watch heading towards Tokyo 2020.

“So we did two races today without any delay, which was nice. I had good starts both races and good speed. I made some mistakes upwind but at the end, I managed to recover.

“In the first race we had a nice wind up to 20 knots and I think everybody was satisfied. In the second race we started with bit less wind and on the second upwind the wind dropped a lot and became more unpredictable but I managed to stay in the top of the fleet.”

The double Olympian, and 2013 World Champion, Zarif (below) is third after a 10,4. Zarif finished fourth in Rio in home waters, last year.

Turkey’s top Finn sailor, Alican Kaynar won the opening race of the day, but he could only follow that up with a 22nd in the tricky second race to sit in eighth overnight. Fellow Olympian Zsombor Berecz, from Hungary, crossed second followed by Karpak, but failed to finish the second race. Heiner crossed in third.

Kaynar said, “Today we had two tricky races. In the first one I was able to sail the right shifts and I had a good downwind so I was able finish first. In the second one I didn't have a good first upwind and on the second beat we had a 30 degrees shift and I was on the wrong side of the course so I ended up in the middle of the fleet.”

“Of course, after the Games, it is very nice to be again in the high level competition.”

One of the main points of interest this week is testing the new format. You can read an explanation here.

Karpak said he liked the idea of the new format. “There will be more of a show, and not only the strongest wins, but the luckiest. I like that. I especially like the final race. Five boats – the winner takes it all. Ohh!”

Bugarin has not yet made up his mind what to think about the new format. “On one hand it is nice to have a chance to win regatta from tenth place through the Semi-Final and Final, and on the other hand when you have built a regatta over the whole week, it is not easy if you lose the regatta in one race. But in any case, it will be interesting to try.”

Kaynar said, “I think it is good to have improvements and try to make sailing to reach more spectators. Let's test this one here in Palma and try to find both a fair and interesting format for the coming regattas.”

Racing in the opening series continues until Thursday. The Semi-Final Qualifier will be held on Friday for everyone not already qualified for the Final or Semi-Final. Then the eight-boat Semi-Final and the five-boat Final will complete the series, with the first across the finish line being the winner.