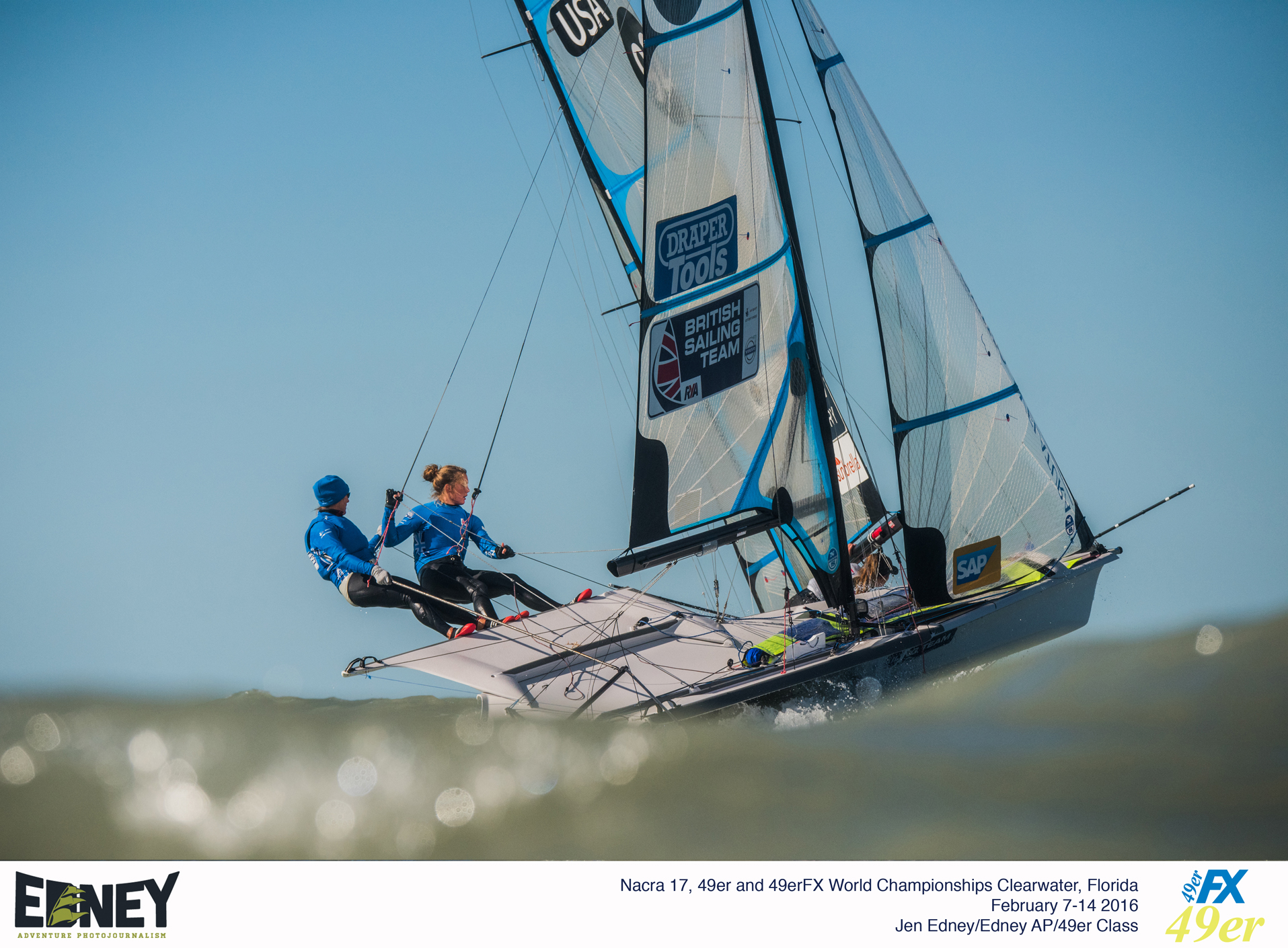 Clearwater, FL. Day two of the 2016 World Championships appeared sunny, with a chance of another windy day. The FX girls were proposed to go out at 11 am, but were held for a bit on shore due to that same old windy/wave sea state that sent the boys packing the day before.

The girls FX Sailors were sent out for the first race of the day in a breezy 16 knots. The women made it out to their designated race courses in similar wavy conditions to the day before. The competitors were ready and raring to go with the first warning blown, but with the breeze building to 18+ at times, the race committee made an executive decision to put up the postponement flag and send the sailors in.

Kahena Kunze of Brazil noted, “We were definitely able to sail, but I think the race committee made the right decision to not start the race. It could have been bad otherwise.”

Postponement came down at 2:15pm and the women were then sent back out to try, try again. The second go at it amounted to only one race being sailed for the ladies. The afternoon breeze came down slightly – enabling the fleet on each course a decent start.

Compared with the conditions earlier in the day, most sailors felt the morning was definitely the lesser of two evils. Jena Mai Hansen and Katija Salskov-Iverson started the race with confidence and then noticed after the first upwind leg the breeze was building. On their downwind, they were able to sail deep, but after capsizing they realized sailing cautiously was better than falling to the inevitable reality of skiff sailing in waves.

“We got fifth, and we capsized on the first downwind. We thought we were being a little too aggressive, then [after the capsize] we said 'Okay we need to get into safe mode here,' and we actually managed to do fine. There was so much weed though, so it was really hard to get around. It affected our steering a lot so it made it hard to jibe.”

The Danish pair was in third going into the top mark, but after their capsize they fought against the fleet to make an impressive comeback finishing fifth on the Blue course. Jena and Katija recently finished 4th at the 2015 Worlds and are competing in this event against two other strong Danish teams for the right to represent their country at the Olympics.

Many of the top FX boats came barreling into the finish leaving the scores a close call. Dutch sailors Annemiek Bekkering and Annette Duetz had the best performance of the day on the Yellow course, keeping their wits about them to be able to sail into first.

The German team of Leonie Meyer and Elena Stoffers charged in at similar pace, placing second overall. Both the Netherlands and Germany are using this regatta to help finalize their selections for the Rio games. Australia’s Tess Lloyd and Caitlin Elks cruised into third, with Erin Rafuse and Danielle Boyd of Canada swiftly after.

“We were fourth at the second windward leg, then hit a forest of trees at the top mark. We had no speed going into a tack because of the weeds and so we ended up capsizing, de-weeding, then had to like come back up to the mark because we had drifted so low,” said Danielle Boyd in a shivering wet state. They were able to make gains downwind securing their fourth place position across the finish line.

On the Blue course, Maiken Foght Schutt and Anne-Julie Schutt sailed their way into first with the Spanish veterans Tamara Echegoyen and Berta Betanzos very close behind. “It was really hard to try to ride the waves, but we were happy with the result because we found in this race you just have to survive. So now, we finally start the Worlds!”

Berta Betanzos is a World Champion in the 470 class, while her crew Tamara is an Olympic gold medalist in the Elliot class. They recently finished 6th at the 2015 World Championships. Next came the top British boat of Charlotte Dobson and Sophie Ainsworth, along with New Zealand's Erica Dawson and Ellie Copeland who were not present at the 2015 Worlds, but recently finished 19th at the Miami Sailing World Cup.

The gentlemen trickled into the boat park with hesitation as they had a bit of a feeling the breeze would not cooperate for the ladies.

Postponed on shore until 3:30pm, the sailors reached the opening of the channel to find the FX sailors cruising in marking the end of Day 2.

An atypical winter for the Clearwater area, although the conditions we've seen in the last two days are sometimes characteristic of this venue. Day 3 will begin bright and early in the hope of giving the sailors more time out on the water to conclude their qualifying round.

Qualifying from the 9-11th of February. Silver and Gold fleet racing from the 12-14th with the Medal races on the 14th. The main hub of information will on www.49er.org

Sailing in two fleets the 49erFX finally got underway on Wednesday and also had an action-filled day with lots of capsizes across the fleet. The fleet was first sent out in the morning to attempt a race, but had to come back ashore with coming back through the entrance to the harbour being one of the biggest challenges at this regatta venue.

“We were postponed in the morning, as they needed to wait for the sea state to get smaller so we could sail. When we went out the waves were still pretty big and we were sent back in again. It’s quite challenging to come back in and we had to come up with a bit of game plan just before we came down wind to stay upright and not break any rigs or bodies and to be safe. There were lots of white caps and it was a bit like on a surf boat, going down a wave and trying to stay safe,” Eliza Solly described.

And skipper Olivia Price added: “I don’t think I’ve been out in conditions that bumpy before. It was a bit hairy at times and when the wind picked up it became pretty hard to really function and get upwind that much.”

In what was a hairy day for all sailors, Australian Sailing Squad’s Tess Lloyd (VIC) and Caitlin Elks (WA) managed to get around the course the best posting a third in the one and only race of the day, which puts them into fifth place overall.

Olivia Price (NSW) and Eliza Solly (VIC) posted 15th to be ranked 29th overall, while Haylee Outteridge (NSW) and Nina Curtis (NSW) finished the day with a 17th and sit in 33rd overall.

“When we finally got to race in the afternoon it started out OK, but then the tide started to change and the sea state got a lot worse and it was a big day,” Haylee Outteridge said.

“We didn’t really know where we were coming in the racing as everyone was upside down and all over the shop. We hung in there ok but on the last down wind we had a big capsize and I got stuck in the foot strap and I got swept away from the boat with Nina having to come to my rescue. We’ll check our rig after the capsizes as the mast goes straight down to the bottom when that happens and hopefully we’ll be all good to go for tomorrow.”