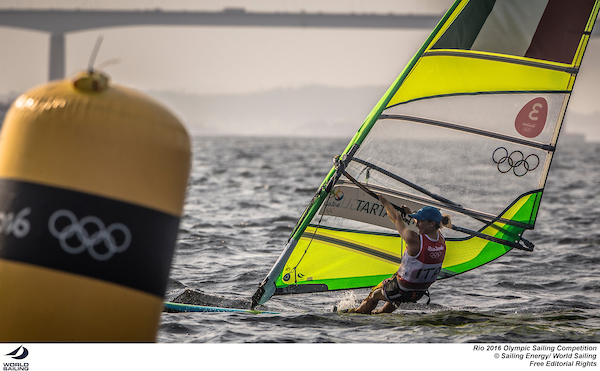 It was a tough day for the windsurfers in Rio today, with conditions ranging from strong and gusty winds to low-pressure pumping on the inshore course.

In the men's division, defending champion Dorian van Rijsselberghe (NED) snatched back the lead after Britain's Nick Dempsey had an eighth place in the final race. The pair has won eight of the nine races sailed and both have generally low scores. But Dempsey is dropping the eighth place he scored when he was given redress for being knocked off his board in the sixth race, so the eighth today has hurt him badly.

The Dutchman now has a handy eight point lead with three qualifiers and the double-points medal race to be sailed. Dempsey has not only dropped off the pace but is coming under pressure from Piotr Myska (POL) who is now only five points behind.

Baring a major disaster, these three are now assured of the podium positions.

Italian Flavia Tartaglini has surprised many with her strong performance at these Games. But the wheels almost fell off today when the wind died and brought in her less-favoured skill of pumping. She was placed 12th and 10th in the last two races today, in stark contrast to the four bullets she scored in previous races.

Tartaglini's lead has shrunk to a single point over Frenchwoman Charline Picon and Russian teen sensation Stefania Elfutina. Veteran Spaniard Marina Alabau is five points further back and the medals are almost certain to go to three or these four.