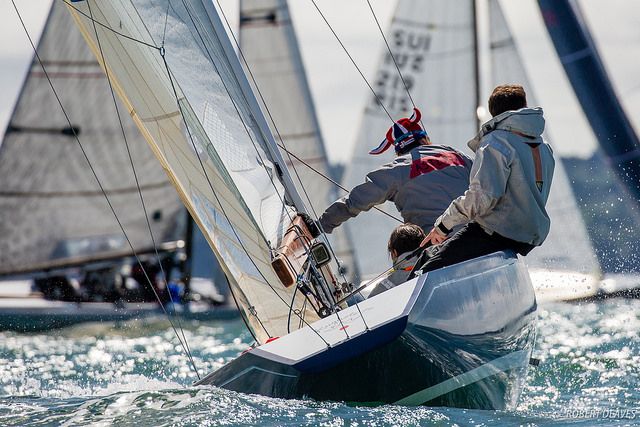 The overnight leader at the 2018 International 5.5 Metre World Championship at the Royal Yacht Squadron in Cowes, John B, BAH 22, (Gavin McKinney, Lars Horn-Johannessen, Mathias Dahlman) extended her lead after a first and a fifth on the third day of the five-day regatta. A win for Marie-Françoise XIX, SUI 218, (Jürg Menzi, Jurgen Eiermann, Bo Selko) moves her up to second, while the most consistent performance of the day from New Moon, BAH 21, (Mark Holowesko, Christoph Burger, Peter Vlasov), with a second and third, moves her up to third.

Wednesday’s forecast was almost a repeat of Tuesday, but was very different on the water. The racing finally got underway in just 5 knots from the south-west after more than an hour postponement on the water waiting for the promised wind. It fluctuated between 3-5 knots for the first race before slowly clearing skies heralded the expected 10-12 knots that arrived for the second race.

Race 4 was all decided just out of the start. The right side was the place to be with Black & White, SUI 219, (Daniel Schenker, Mark Dangel, Anthony Shanks) first out of the blocks and initially winning the right group. However then John B was gifted a line of pressure and a shift and sailed through everyone, tacked and was gone. The race for second was on. The wind dropped to less than four knots at times, but the right side continued to pay. John B sailed away to build a lead of more than two minutes. Black & White held off strong challenges from New Moon and Clark Kent, NOR 64, (Petter Fjeld, Peter Hauff, Christen Horn Johannessen) to remain in second. New Moon moved into third on the final upwind. As the fleet sailed the final run, the breeze finally built to set the scene for a great second race.

Marie-Françoise XIX got a great start at the pin end in Race 5 and was soon leading the group back across to the middle. The front of the fleet was very close as the wind picked up to 10-12 knots with the sun finally breaking through. Marie-Françoise XIX rounded first from New Moon and Black & White. With fantastic racing and sailing right through the fleet, Marie-Françoise XIX maintained her lead throughout, holding off New Moon in second. However Black & White got a little lost on the final upwind to drop to sixth, while Caracole, SUI 214, (Bernard Haissly, Nicolas Berthoud, Daniel Stampfli) moved up to third.

Overall leader John B recovered from a deep first mark rounding to cross in fifth, taking several boats on the final upwind, to extend her lead to six points, Marie-Françoise XIX and New Moon in second and third are separated by a single point with four races left to sail.

Silver Fox, GER 83, (Joerg Gruenwald, Michael Schulz, Dominik Zycki) is just outside the top 10 in 12th place. It was something of a homecoming for the boat as she was built by David Heritage, of Cowes, in 2008. Zycki is a former Finn and Star sailor and is enjoying his first 5.5 Metres.

He said, “I am very happy to be here. This is a legendary place for sailing and for every sailor. I have not been here before, so I think I missed a lot, so I am really happy that I can compete here in the 5.5 worlds.”

How he came to be sailing 5.5 Metres. “It was Robert Stanjeck, who gave me Michael’s number and said he was looking for a tactician for 5.5 racing, so I called him. Since then we have been sailing together, not every regatta, as I am also sailing Dragons and working. But I found time to do this and I am happy about that as I can meet all the guys in the class.”

“This is a very special class. And the boat is very complicated but very nice for sailing. You can change everything, and must really pay attention to everything you are changing so it’s complicated but nice for the sailor. I really like it.”

On the racing, “Today was our best day in the worlds. On the first two days we were sailing near the back of the fleet but today we sailed two races in the top ten. We were always fighting with the top guys, which is really great in the 5.5 because these guys sail really well and really fast and do not make many mistakes. Competing with them was really something special.”

“In the first race it was really light at times and we had to be really patent. Our boat is already ten years old and it’s a modern but it’s optimised for lighter conditions, so we were really fast and when you are fast in a 5.5 tactics is easy for me.”

“In the second race there was a stronger wind we had a great start and good first beat. We lost a bit downwind but gained on the last beat when the left paid a lot, and finally finished eighth. So we are happy with that. Two places in the top 10 is a very good result.”

Clark Kent is up to ninth overall after her best day so far. Skipper Petter Fjeld said, “We had a very nice day on the water. The breeze was increasing and we were waiting for sun, but it didn’t show up, so we had to dress up a little bit more with warmer clothing and then the breeze came in and supplied us with some beautiful sailing, but very difficult. The current was pushing us everywhere and there were lanes where the good guys, when they found the lanes, kind of disappeared. But we had a fourth and a seventh and that’s a lot better than yesterday so we are happy people and enjoying a beautiful day in Cowes.”

He has been sailing the boats for 27 years. “I started as a crew in 1991. A friend of mine got his father’s boat and we kept it going. I was also crewing for the Bahamians for some years and then I got my own boat.”

On why he enjoys 5.5 sailing, “These are my good friends. We get together a few times each year and go to nice places and it’s a beautiful boat to sail. It’s sad that not more people discover how nice they are and how good they are to sail. They are very well balanced, and beautiful. I sail with my best friends and we challenge our good friends from overseas.”

At the class AGM in the evening the gathered sailors voted overwhelmingly for the sunshine and warm climates, with several future venues decided. In 2020 the class will travel to Australia for the first time in 15 years for its world championship, while the 2020 European Championship will be held in Sanremo, Italy.

Racing in Cowes continues on Thursday with two more races scheduled from 1100. The world championship consists of nine races, and ends on Friday 24 August.