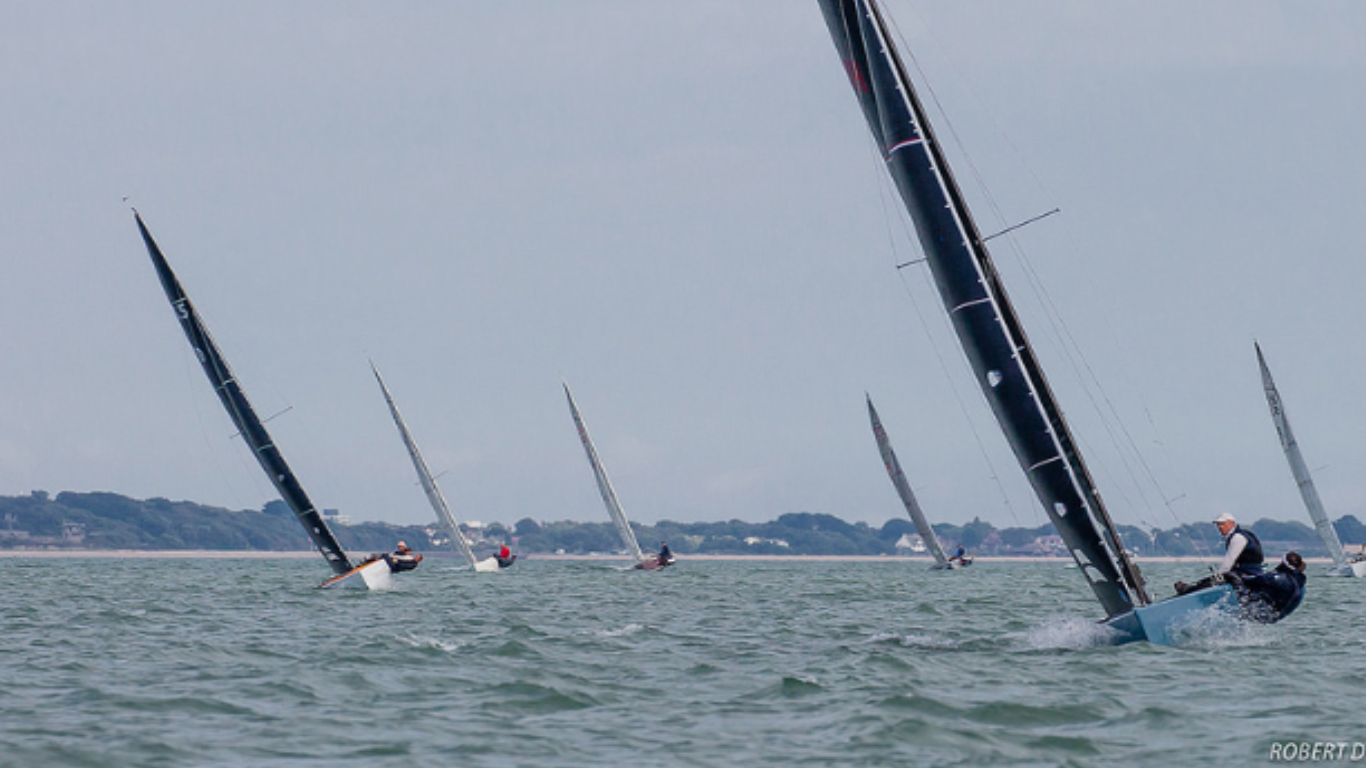 Defending world champions, John B, BAH 22, (Gavin McKinney, Lars Horn-Johannessen, Mathias Dahlman) put on the best performance on the second day of the 2018 International 5.5 Metre World Championship at the Royal Yacht Squadron in Cowes with a first and a second place to move to the top of the leaderboard.

Tuesday threw another wide range of conditions at the 5.5 Metre fleet. Threats of rain didn’t materialise but the wind went from a very light southerly to a moderate south-westerly during the first race, and with clearing skies and high temperatures, it was a perfect day to be sailing.

Race 2 of the series started after a short postponement and a painfully slow beat from the mainland towards East Cowes. New Moon, BAH 21, (Mark Holowesko, Christoph Burger, Peter Vlasov) rounded first but missed the incoming change. John B did not miss it and was first to gybe away to the west and the first to get the new breeze. They led at the gate and pulled away from the fleet for a huge win. The battle behind was between Duchess of B, NED 31, (V Bredero, Weibe de Witte, Paul Verhaar) and Artemis XIV, who eventually took second place.

The breeze had increased for the second race but decision over the current was still causing a huge split in the fleet with boats almost taking in both corners at some stage, looking for any advantage. After a slight mishap in the first race, Marie-Françoise XIX led round from Maitresse Gaat Vreemd, NED 35, (Piet van Opzeeland, Laurence Mead, Felix Trattner). These two battled it out at the front over the race of the race, but a problem with halyards on Maitresse Gaat Vreemd let the Swiss boat escape, while John B played the opposite side of the course to come back strong and take second.

Weibe de Witte from Duchess of B explained their race, “The first race was very good. We had a poor start but we got up well in free air, but because of the wndshift already at the top mark we gybed behind BAH 22 and that was were we made a head start. Kristian Nergaard was in third and then there were the three of us all the way round. We lost it on the last downwind after I made a little mistake with the buoys and he came to our left hand side and squeezed in between. But still a good race for us with the third, so quite satisfied with the day.”

He was pleasantly surprised by the conditions n Cowes, “The weather is nice. We heard all the horror stories about Cowes, always bad weather, but it has been fabulous since we’ve been here so I quite like Cowes.”

The fleet includes seven Evolution boats (those built between 1970 and 1993) and two Classic boats (those built before 1970). One of them is Auguste 1er, FRA 47, (Gurvan Jaouen, Anne Jaouen, Mael Duigou). Designed by Jean Berret and Olivier Racoupeau and built in 1992, she is reputedly better in a breeze than flat water, something that Duigou confirmed.

“The day was hard today because we had no speed in the first race. We were working a lot with the jib but we couldn’t find our speed. The second race we did better with more speed and went to the right places. Auguste 1er quite a good boat and we are very happy to be here.”

He started sailing in 5.5 Metre around 10 years ago, always with Gurvan. “He also has a Classic, and we do a lot of world cup and races in France. It is very pleasant to sail these boats. It’s a small boat but very fun and very hard to be first every time.”

Black & White, SUI 219, (Daniel Schenker, Mark Dangel, Anthony Shanks) is in fifth place after a solid start to the series, though a series of mishaps including catching a navigation mark with the backstay and nearly losing a crew member overboard on Monday have not helped their chances. Tuesday was less eventful.

Middleman, Mark Dangel said, “We started with a very light wind, it was almost like sailing on Lake Zurich. We didn’t have the ultra light sail on but then there was a windshift and for the second beat and the wind was picking up and so we got back to our original good speed.”

“In the second race it got really difficult with the tide. We were going quite fast on port tack but we didn’t know whether it was good, but actually it turned out quite well, but trying to repeat it on the second and third beats didn’t work out that well.”

On sailing with Schenker and Shanks. “We are very glad we have Anthony on board. He is our local knowledge and we are trying to communicate between Swiss German and English and translate between them. But we are getting along very well together.”

Dangel has been sailing in the class since 1981 and says he has witnessed the whole evolution from Classic to Modern hulls. His first world championship was in 1981 in The Bahamas.

“I think I am probably one of the longest in the class. I think the boats are still a lot of fun but they need more attention. With a little bit more marketing we hope to bring the class more attention worldwide.”

He says it is still great fun. “The fun that we are a great family. We all know each other for a very long time. We love the people coming from all over the world to sail and there is a lot of tradition but also a spirit for a more modern construction. I think the class is ready for the next step and I am looking forward to some good ideas.”

“The boats are easy to handle, they have developed from a lead transporter to an almost dinghy like boat that you can manoeuvre very easily. You do not need a lot of force. They point very high and the only thing we perhaps miss is a reaching course.”

“But it’s difficult; the boats are expensive but there are far more expensive hobbies than this and I am looking forward to more people around the world to be attracted this class again.”

The world championship consists of nine races, and end on Friday 24 August.

Full results can be found here