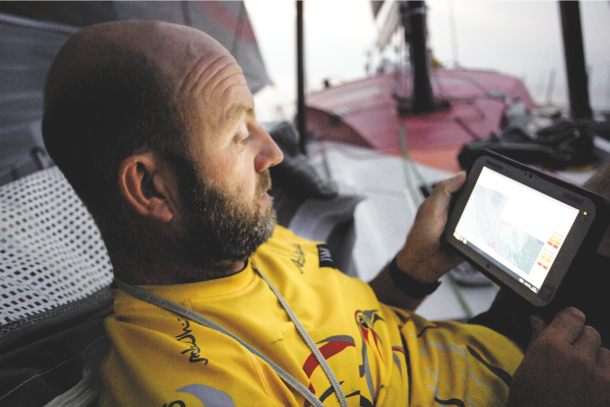 Bringing the navigator on deck and into inshore fleet racing was once the domain of the America’s Cup until the advent of deck screens. Deck screens have been common for some years now in professional racing such as the TP52 class. However, new technology has lowered the cost of implementation. These days it is not unusual to see club racers using deck screens to increase their starting accuracy and to take advantage of tactical navigation software such as Expedition, Deckman and Adrena.

Just what are the options for a club racer who wants to use software on deck to help make smarter decisions?

Broadly speaking there are three methods that can be implemented, each varying in cost, complexity, and advantages. Which method is right for you boat largely depends on your budget, but also the tasks you want to achieve on deck.

A quick search on the internet for deck screen set-ups will reveal many “Apps” that run on low cost iOS or Android tablets. The saying “there’s an app for that” has never rung truer in sailing. The most common set-up in this category is a tablet with built-in GPS running an app that tracks the boat. A basic race course is entered and using the boats speed over the ground (SOG) and course over the ground (COG) tactical details are displayed for the user. Generally speaking, these work well and are very cost effective to implement.

This solution will give you rough start line data such as time to the line at the current SOG, distance to the line both perpendicular to the line and also along the yacht’s COG. These can be very handy tools to have on deck. However, they lack the finesse that comes with data enhanced with acceleration tables, rate of turn tables and a starting polar.

Once on the race course this solution will give you times to lay lines, current and next leg range and bearing, and a navigational chart to use. Again these are sufficient for the most part and provide a great low cost solution. However, they do not make any allowance for current or the boat’s polars. Nor do they link with any instrument feeds giving true wind direction trends, and next leg true wind angle data.

Recently, some apps have tried to implement an instrument connection via Bluetooth or wifi in an effort to give access to the yacht’s sensors thus allowing true wind data, current information and depth information. At the moment the power of these tablets and the unreliability of wireless data transmission on most yachts, means the apps cannot be relied upon in all circumstances.

A great intermediate set-up between a simple low cost tablet set-up and a more advanced laptop redundant set-up is to use a Windows tablet running Expedition, Deckman or Adrena. This requires a wireless connection to the instruments via wifi, meaning the boat needs a robust network set-up. The minimum requirement for a wireless infrastructure deployment is to have a commercial grade Wifi router running off the yachts 12vDC power source and fitted with an exterior antenna that allows full deck coverage.

Once the correct wifi network is set-up, a data bridge between the yacht’s instrument system and the network needs to be added. This allows data to flow to the tablet. Newer instrument systems provide this as standard.

This set-up allows the use of a fully-featured tactical navigation software suite including advanced features such as strip charts, boat polars, acceleration and rate of turn tables.

By using the yachts instruments you have access to much more accurate data such as tide adjusted lay lines, start line time to burn (including acceleration when sails are trimmed on) and full next leg data with true wind angles and sail selection information.

The risk with this type of set-up remains that the whole shooting match is literally in the hands of the navigator. If he drops the tablet overboard all that data is lost. Make sure you backup frequently.

This set-up has the advantage of being significantly lighter than a full laptop and deckscreen arrangement.
It is ideal for situations where even the smallest amount
of weight can make a difference.

The ultimate set-up for a redundant system is to use a laptop down at the navigation station hard wired to the instrument system and then a deck screen that is simply replicating the laptop screen on deck.

The first and most obvious advantage of this set-up – all the data is safely kept below deck where it is at less risk to damage. Another advantage is that two or more deck screens can be linked to the laptop so that when the battery runs out on the first, a second can be used.

Typically, the system uses a laptop with a robust hard wired connection such as Ethernet or serial RS232 or RS422 to the instrument system. The deck screen then uses an Ethernet connection to the yacht’s wifi network.

A system such as this is also great for offshore races because it allows the navigator to sit below and work directly on the laptop for routing and competitor tracking; a much easier task on a full keyboard than on a deck screen. This set-up is the most common set-up on board a Med Cup TP52, and the Volvo Ocean 65s also used this style of
set-up in the last Volvo Ocean Race with great effect.

iPads are generally very cheap for the amount they can do. They have a long battery life and are light weight. However, the screen can be difficult to read in direct sunlight. iPads are also only waterproof inside an after-market case. I prefer cellular models because they have built-in GPS chips. They can be notoriously difficult to use once the cases get wet.

There is a wide variety of Android tablets on the market. Some, like the iPad, are only waterproof in an after-market case. Others, such as the Panasonic FZ-A1 Toughpad or Xplore’s XslateD10, are rugged and waterproof without a case. Again screen view-ability in direct sunlight can be an issue, but with many options
on the markets it is possible to find brighter screens – look for a 500NITs or brighter screen.

Many of these tablets also have replaceable batteries
so a spare can be swapped in when the first is flat.

A Windows tablet is a requirement for direct to tablet setups running Expedition, Deckman or Adrena. Again, there are many options out there from simple cheap tablets that will require a waterproof case, through to military grade rugged waterproof models.

My personal favourites are the Panasonic FZ-G1 with its 800NITs screen or the Xplore XC6 with a super bright 1300NITs screen and dual input method (touch and digitizer). Both of these are bright (allowing visibility in all sun conditions) and rugged, surviving the harshest conditions I have thrown at it.

Microsoft Remote Desktop is a great tool for remote access and screen-sharing; it is my first choice when setting up a new deck screen. It is fast, reliable, and automatically scales the screen to the tablet. iOS, and Android both have a MS Remote Desktop app that can be used on these relatively cheap tablets. Be aware that not all versions of Windows come with this feature; I suggest Windows Professional. Some wifi routers have issues streaming MS Remote Desktop connections; in these instances, the lag in the display will mean
you will need to look at one of the alternatives below.

RealVNC is my second choice after MS Remote Desktop. It uses a proprietary protocol to ensure a secure fast connection between the viewer and server. The free version works well, but has an annoying pop-up when you first connect. The full, purchased, version does not have this. The screen resolution of the server is displayed on the tablet which can cause some scaling issues, but setting the resolution of the laptop to that of the tablet generally solves this issue.

Splashtop was once the best screen streamer around because it was
very fast and reliable. Then the manufacturer released version 2.0 which is an internet based system for remote access. As yachts are often not internet connected or use expensive 3g/4g or satellite connections, I prefer to keep everything on the local network.