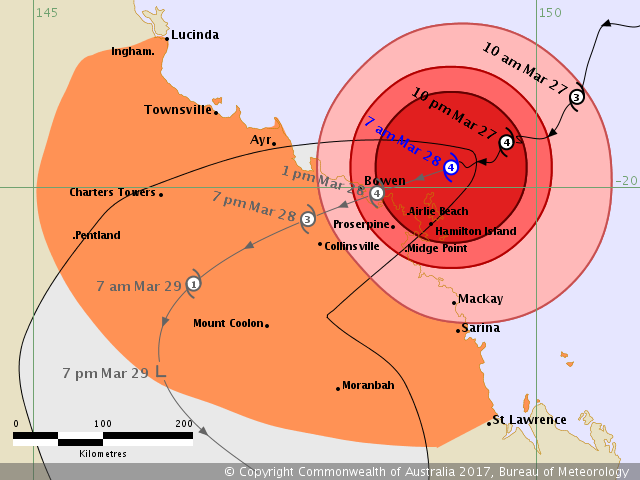 At 12.45pm Queensland time, reports are being received of boats breaking moorings at Airlie Beach as Category 4 Tropical Cyclone Debbie prepares to cross the coast between Bowen and Proserpine. A wind gust of 263km/h (142 knots) was recorded at Hamilton Island, which is now in the eye of the cyclone.

The Bureau of Meteorology is warning for abnormally high tides, large waves, storm surge and rough to phenomenal seas. Sea levels have exceeded the highest tide of the year at Shute Harbour and Laguna Quays.

Very heavy rainfall has been recorded as the cyclone is moving extremely slowly (between 6 and 12km/h), meaning that the damaging winds and rainfall linger.

The heavy rain will continue until at least mid-morning on Wednesday, when the bulk of the 300km wide weather event will have passed over the coast. Inland areas are expected to receive heavy rainfall but the winds should drop slightly as they encounter the friction effect of land, in particular the Great Dividing Range.

The effects of the cyclone will be felt all along the Queensland coast, with a current forecast of rainfall in excess of 200mm for the Sunshine Coast, Moreton Bay and the Gold Coast on Thursday and Friday.

Here is the latest BOM release:

Severe Tropical Cyclone Debbie intensified to Category 4 strength overnight, and has maintained this strength as it approached the coast.

The Bureau will continue to update its tropical cyclone advice and track maps including the use of the Standard Emergency Warning Signal, as the system approaches the coast and moves overland at tropical cyclone strength.

Queensland Regional Director, Bruce Gunn, said the cyclone has slowed down over Hayman Island, and will cross the coast between Bowen and Proserpine this afternoon.

“Estimated sustained wind speeds are at the upper end of Category 4 strength in the range of 185-195km/h, with peak gusts to 270km/h. A peak gust of 263km/h been recorded at Hamilton Island today.

“Gales are forecast to impact communities between Lucinda and St Lawrence and inland to Mount Coolan and Moranbah for up to 36 hours after the system makes landfall,” he said.

Although the strongest winds are near the core, damaging and very destructive winds can extend several hundred kilometres from the cyclone’s centre.

Storm surge is a risk factor with severe tropical cyclones, and if the cyclone crosses the coast around high tide this will enhance these effects. Sea levels have exceeded the highest tide of the year at Shute Harbour and Laguna Quays.

“Severe Tropical Cyclone Debbie will deliver significant rainfall as it tracks over land, with flooding another major impact of the system. This is a dynamic and changing flood situation, please check the Bureau's website for the latest warning information,” Mr Gunn said.

Widespread daily rainfall totals between 150-250mm are expected with the passage of the cyclone, with isolated falls in excess of 400mm possible along the coastal fringe.

Queensland Fire and Emergency Services are urging the public to: