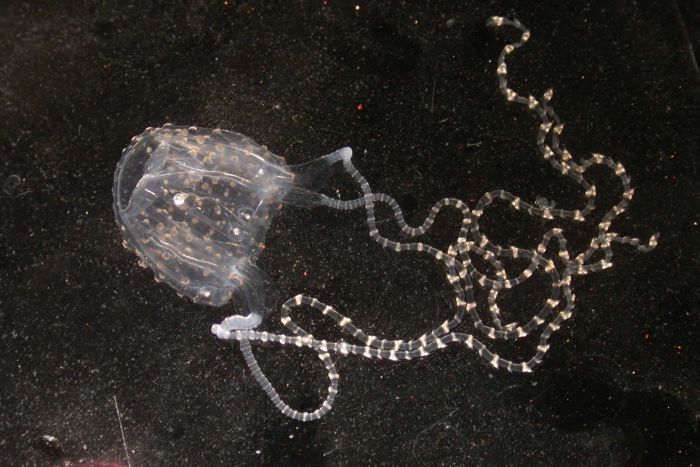 The migration of the deadly Irukandji jellyfish and related species has small boat sailors in Moreton Bay worried.

Over the weekend, an article in the Brisbane Times reported the sighting of the Morbakka fenneri jellyfish off North Stradroke Island, causing the Redland Bay City Council to erect warning signs.

Irukandji, box jellyfish and bluebottles have been responsible for stings along the Queensland coast this summer with several beaches closed at various times.

​Surf Life Saving Queensland North Barrier Region supervisor Russell Blanchard said the box jellyfish contain “one of the most powerful toxins known to man”. “They can potentially kill a human in two to three minutes minutes,” he said.

Off Fraser Island a spate of stings saw 10 people hospitalised and sparked fears of a southern irukandji migration.

According to the website http://irukandjijellyfish.com/ the Irukandji is believed to be the most venomous creature in the world. It has stingers not only in its tentacles but also in its bell.

The initial sting is typically mild and is followed, minutes to hours later, by vomiting, profuse sweating, headache, agitation, rapid heart rate and very high blood pressure. The increase in blood pressure may be life-threatening and can be associated with abnormal heart beat and heart failure. The symptoms may last from hours to several days, and victims usually require hospitalisation.

In an ABC report, Associate Professor Seymour said there had been two confirmed deaths from Irukandji in recent history in Australia, but dozens of people are hospitalised from Irukandji syndrome every year.

He has been stung more than 10 times by the notorious jellyfish, which grows no larger than a thumbnail. He said the pain was overwhelming.

“This is a 10 out of 10 pain that you are going to hang on to for probably six to 12 hours. There's usually severe vomiting, nausea, stomach cramps and about 10 to 15 per cent of patients end up with cardiac problems.

“Linked with that is this feeling of impending doom where everything is going to go wrong and there's nothing you can do to fix it.”

The website describes the treatment: Victims frequently require hospitalization to receive analgesics and sometimes intravenous antihypertensive therapy; alpha-blocking agents such as phentolamine have been used for this purpose. Supraventricular tachycardia and high-intensity transient signals in dilated cardiomyopathy have been reported following Irukandji stings, and it has been suggested that serial echocardiography be performed to monitor the progress of severely affected patients. Analgesia is usually required, and may need to be given intravenously when pain is severe. First aid consists of analgesia then examination and investigation followed by reassurance. The role of vinegar to inactivate undischarged nematocysts remains uncertain, with initial work proving inconclusive.

The Irukandji season typically lasts for only two months but the ABC reports that this is increasing to up to six months.

Putting it all in perspective, the actual danger to sailors in the greater Moreton Bay remains very low. The sightings are isolated incidents at this stage and if water temperatures return to normal in future summers, the migration south will cease or even reverse. But it is as well to be aware of the symptons and seek treatment immediately if an Irukandji sting is suspected.