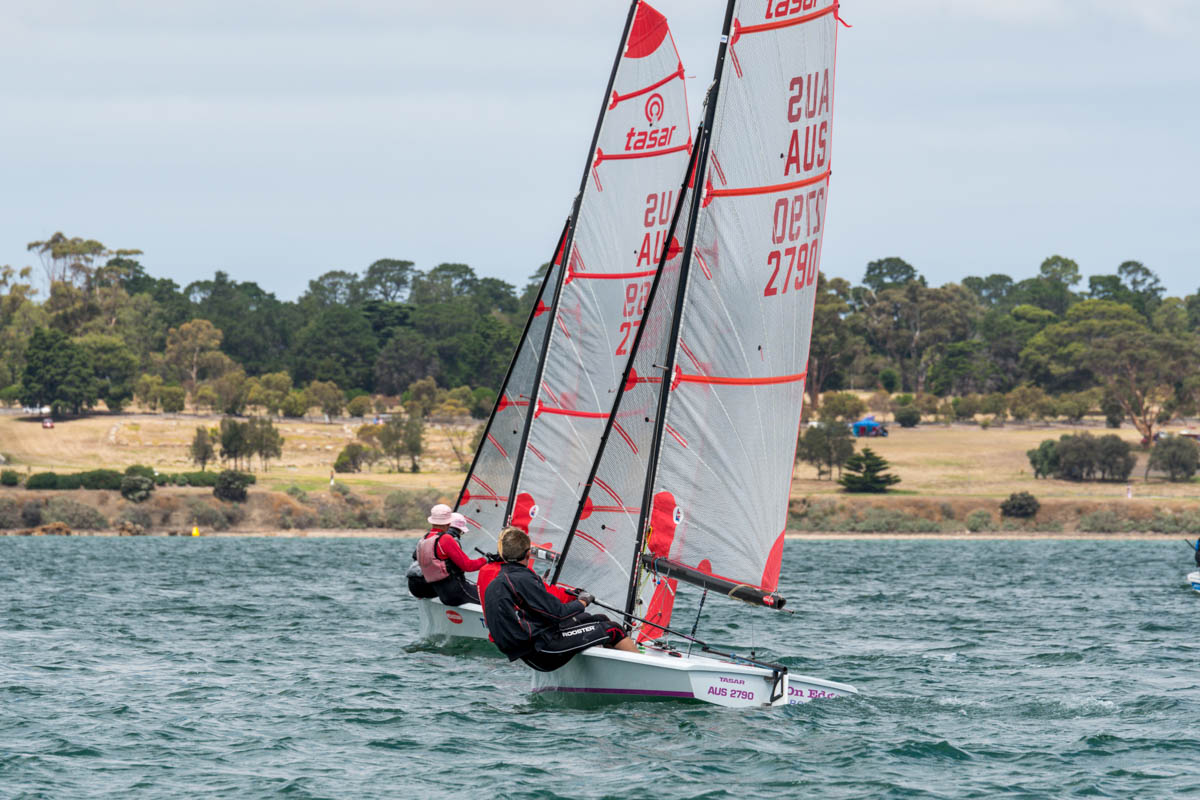 The last day of a new Off The Beach series on Friday January 27 signalled the close of the Royal Geelong Yacht Club’s longstanding Festival of Sails for another year.

A huge fleet of keelboats including classic boats, sports boats, multihulls and one design classes tidied up their four day competition on Tuesday January 24 and made way for 50 dinghies and skiffs to trailer in and launch off Geelong’s Eastern Beach on Australia Day, Thursday January 26, 2017.

Suddenly the Festival’s average competitor age fell drastically as 49ers, 29ers, Wasps, Lasers, Tasars, Cadets and the Hansa family of dinghies were divided into two groups and sent to two course areas on Corio Bay for the two day series.

After racing on Thursday competitors and their families joined tens of thousands of locals and holidaymakers on the waterfront for all the fun of Australia Day and a busy shoreside program including a key festival moment, the fireworks that lit up Cunningham Pier, the RGYC marina and all the moored spectator vessels.

Course one, run by race officer Steve Neunhoffer, managed to get racing away on Thursday and Friday. Course two race officer Jock Ross and competitors had an inkling Geelong’s trusty afternoon sea breeze might play the game for Friday’s session but sadly it never arrived and day two was blown away, leaving day one’s results as final.

Thursday’s shifty breeze varied from five to 15 knots and the race management team had to keep responding to directional changes to set and maintain fair courses.

Neunhoffer managed two races on course one on Friday, “One in a light NEer then half way through I did a change of course to 60 degrees and finished them at 90 degrees before relaying for sou’easters 8-10 knots for the second and final race. I think all the patrons were happy,” he added.

The annual WL Curtis Trophy for winning Cadet crew was presented to Ella and Matthew Purnell (Resistance) and the Waspz joined the action for the first time at Geelong, Daniel Quinlan’s Carbon scoring the top trophy in the Foiling Moth division.

The best placed Hansa 303 was Russell Phillips and he’s looking forward to returning to RGYC in April for the Hansa Asia Pacific Championship that is drawing an international fleet and likely to bring 100 entrants to the standalone event.

“Every two years we run an Asia Pacific Championship, this year it will be Geelong and run in conjunction with the Hansa states and nationals for all four classes in the family, the 2.3, 3.3, Liberty and Skud. At present we have five confirmed Japanese entrants given the next worlds will be in Hiroshima in October 2018. We are probably looking at 100 or so competitors.

“Geelong has been great encouraging us to come and fly the flag,” said Phillips, the president of the Australian Hansa Class Association. “Hopefully next year they’ll move us closer to the keelboat part of the regatta. This is our first year; we’ll try and grow the event through our membership, to bring a bigger fleet to the OTB series next year.”

This was the first time in a number of years that OTB boats have featured over a two day event as part of the Festival of Sails presented by major partner Rex Gorell Land Rover.

Full OTB results in all divisions can be viewed here.

The 2018 Festival of Sails will be milestone edition for the organising club and its partners as the Melbourne to Geelong Passage Race that began in 1844 and became the feeder race and festival’s opening event celebrates 175 years of rich history.