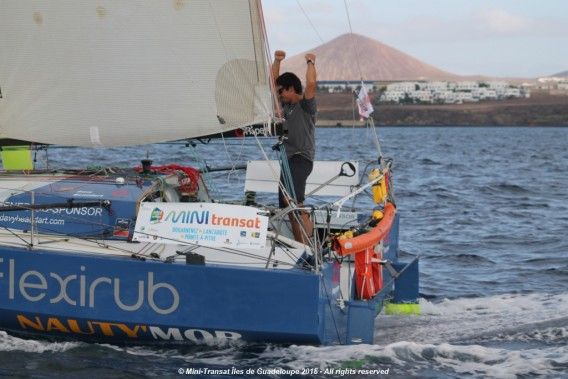 Davy took the lead of the race on the 21st of September just off Finisterre and held on to it right to the finish.

“This boat surprises me more every day. It really is a great success! It has been very well thought out, despite it been demanding, it is noise, but it was really good fun to sail. In the wind, and I had up to 30/40 knots, it was not fun and either the boat would make or break!
I have no regrets about having spend nights and weekends to really prepare it well, that really helps… It really is a great race!”

Davy Beaudart can savour his victory. The realisation of what a great win he has had is just beginning to dawn on him; how he has beaten his adversaries, four of whom are locked in a battle for second place, consisting of continuous gybing, which will quite possibly last right up until the finish line in Lanzarote. Whilst the top three podium places are clear-cut in the Series class, it is quite another matter for fourth place.

Who will be second to cross the finish line? Taking into account the regularity in the rankings, we can bet on Frédéric Denis (Nautipark). However this does not take into account the fighting spirit of Axel Tréhin (Aleph Racing), or even Luke Berry (Association Rêves) who has a strategic position and who could profit from having lined himself well further West, and so could sail down past his two opponents on a favourable wind angle.

Behind these three, there is a fierce fight between Clément Bouyssou (Le Bon Agent ! Bougeons l’Immobilier) and Ludovic Méchin (Microvitae) who are racing within sight of each other. This small group is expected to reach Lanzarote this evening and join Davy Beaudart on the brand new pontoons at the Marina in Arrecife. So, it won’t be a surprise to see the many tapas bars around the marina staying open until the early hours with stories of gybes to the wire, adrenalin rush surfs, breakages and all manner of nonsense that sailors talk about in the corners of bars.

Series: a battle to the foot of the podium

In the series class, it seemed as if the hierarchy was fixed for the first three places. Ian Lipinski (Entreprises Innovantes) led the dance throughout, in front of Tanguy Le Turquais (Terréal) and  Charly Fernbach (Le Fauffiffon Hénaff). An Ofcet, an Argo, a Pogo 3, the dynamism  of the boats  holds true in the end positioning, even though they took three different routes to get there. Behind this trio, everything is up for grabs, as less than 5 miles separate the fourth place Julien Pulvé (Novintiss) from the ninth place, Edouard Golbery (Les Enfants du Canal). We can only imagine the intensity of the battle, and also the respect the competitors have for each other as they sail, often neck and neck, like Armand de Jacquelot (We Van) and  Patrick Girod (Nescens).  In this way, the descent along the Portuguese coast took everything that they had. The Portuguese sailor, Antonio Fontes (Vela Solidaria) confessed to K8, one of the accompanying boats, that he had suffered some hallucinations through lack of sleep while passing in front of Lisbon.

Even if, in theory, the stage of the race to reach Lanzarote required somewhat less effort than the rest, the energy required was certainly double, because of the accumulated tiredness and the technical stops.  For Pilar Pasanau (Peter Punk) and Maxime Eveillard (Héli Strategy),the 72 hours of technical stops  was a veritable race against the clock in order to be ready to take to the sea again within the time limit. Fidel Turienzo (Satanas) had to take the same gamble as he tried to repair his mast, which had broken into three parts. Jean-Baptiste Daramy (Chocolat Paries) made a different choice, equally as risky. Instead of stopping, he decided to keep on sailing on one rudder, trying to balance out the boat’s instability with the following wind to continue going forwards. Playing this hand, he managed to take tenth place, which lets him stay in the match for the second stage. For them, the race for results is over.  What’s left is the hope running through their bodies to keep on going in the race, to live out their dreams. The small community of Mini-ists never always an exceptional welcome each time for these very unusual sailors who defy all reasonable logic…the desire for adventure may be a beautiful thing, but it also requires a certain level of madness!