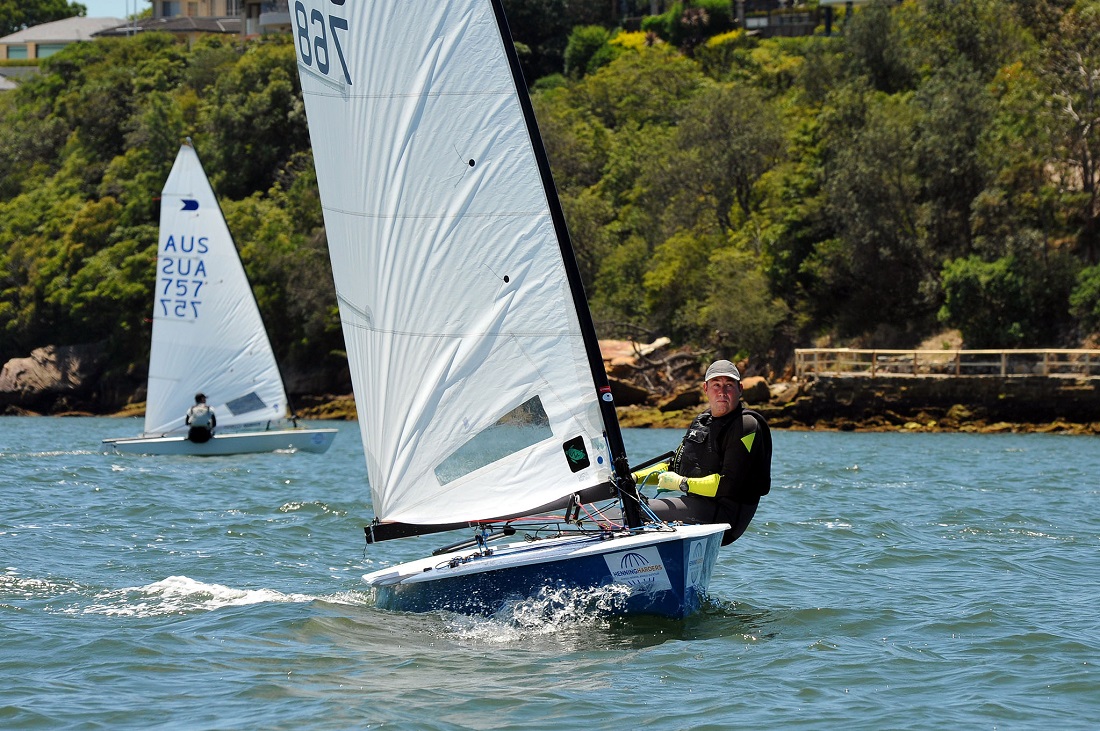 A third and a further win has put Tim Davies firmly in the lead of the of the Henning Harders 55th OK Dinghy National Championship, hosted by Drummoyne Sailing Club where he is a member- and, says defending champion Mark Jackson, “Tim’s in the groove – he’s the one to beat.”

Davies, who finished sixth and first in yesterday’s opening races, says being relaxed has helped him sail at the top of his game: “If I can stay relaxed I’ll sail better. I just have to keep my head down and keep nutting away at it,” he commented.

He also left behind Elizabeth Williams (Qld), the lone female in the fleet who finished third, a further 12 seconds adrift, to move up to 11th overall. She is finding the moderate conditions of the last two days to her liking.

“It was a tricky day,” Davies said of the light shifty easterly on upper Sydney Harbour, “but I was able to wangle two good results. I made up places in both races, both times at the last mark rounding.”

Skelton and Brent Williams, from Adelaide SC, led the fleet with a gap to the next group at the bottom of the first triangle, but Williams eventually dropped back to finish fifth, overtaken also by Queenslander Kelvin Holdt.

“They all banged the left while I did a little tack to the right and held the lift,” said Davies, who from there held starboard all the way to the layline. This after he and Peter Horne (yesterday’s leader from DSC) had a tussle mid-race, but Horne dropped back to sixth place and has dropped to 10th overall.

The earlier Race 3 was a Black Rock Yacht Club assault, belonging to Jackson and Blasse from start to finish, allowing Blasse, the 2009 National champion to move up to third overall and Jackson from seventh overall to fourth at the end of the day and with four races in the bag.

“I wanted the pin and I won it both times (after a General Recall and Black Flag) I was determined to start at the pin and go left,” Jackson commented.

“We worked up the shore and sailed neck-and-neck, literally match raced Andrea around the course. We had the jump on the rest.”

Blasse led around the first mark, but then Jackson gybed inside him and took the marginal lead.

It looked as though Blasse had come unstuck at the north-east corner of Cockatoo Island when four boat lengths behind Jackson, a ferry came between the two. Jackson weaved his way through, but Blasse had to duck it, which could have been fatal.

“But he ended up picking up a shift and we had a tacking duel all the way to the finish. It was great racing,” said Jackson, who with Blasse, left Davies, Peter Robinson (DSC), Black Rock YC sailor, Folkert Janssen and Holdt in their wake.

“It’s extremely hard sailing at this venue. Sometimes there’s no rhyme or reason to what we are doing,” Jackson confessed.

“If you can get clear of the rest of the boats, you’re OK and can sail how you want, but if you get stuck in the pack, it’s almost impossible to get out again. There are no real overtaking lanes downwind, and that’s mine and Andre’s strong points,” he said.

Jackson dropped finished eighth in Race 4 (Blasse was 12th), so is 14 points off the lead and four points behind Blasse. Both will have to find their mojo to have any chance. Jackson admits the pair will have to come up with the goods in every other department if they are to succeed.

“Tim is sailing fantastically well. Peter Horne is doing a great job, as well as Mark Skelton. Tomorrow is looking light on for breeze too, so we’ll wait and see,” Jackson said.