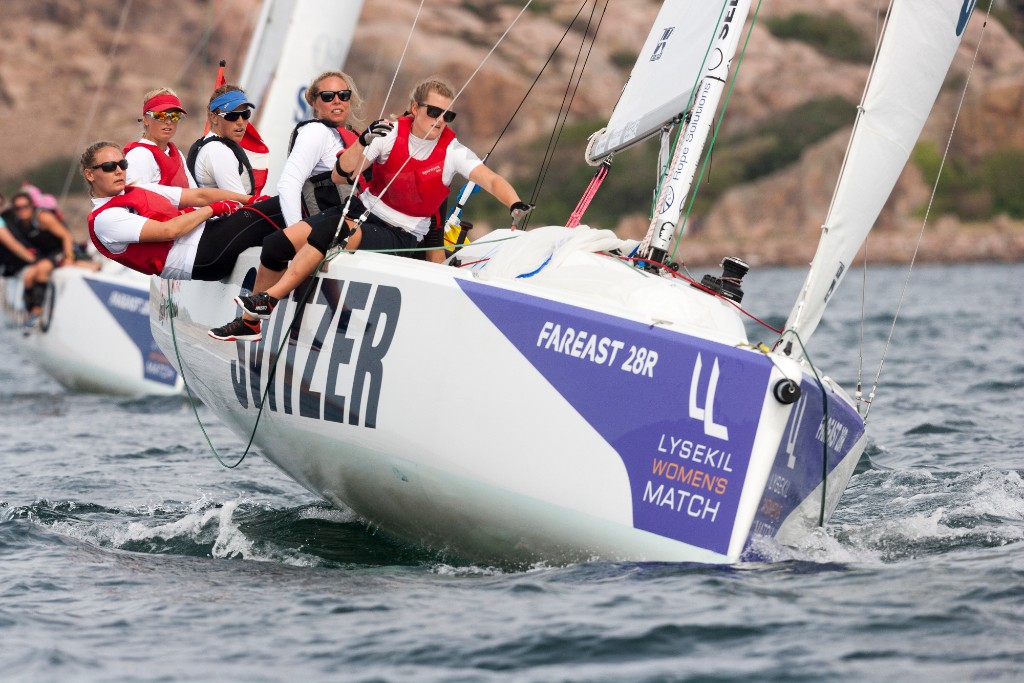 Henriette Koch is the only skipper who has secured a spot in the quarter finals with her nine victories out of ten sailed matches. Dan Ljungsvik Photo.

Day two of Lysekil Women's Match commenced with the 11th flight of the round-robin, and the light and shifting conditions caused some delays. When the wind finally picked up, Henriette Koch (DEN) emerged as the strongest competitor out on the course to climb to the top of the leaderboard.

In the morning the wind went from non-existent to 20 knots in the matter of minutes. A team that took advantage of the changing conditions, especially in their match against Swiss skipper Alexa Bezel, was Women on Water/Team Kattnakken from Denmark, skippered by Henriette Koch.

“There were many dark clouds and it was difficult to read which of them would impact the conditions, but, we read it well and were able to trim our sails accordingly. We were extending on every leg of the course, allowing us to focus and sail conservatively to minimize mistakes,” says trimmer Trine Bentzen.

In their second match of the day against French Pauline Courtois, the Danes took the command directly leading from start to finish.

“It was definitely our most fun match so far in the competition. Pauline was at that point still undefeated and approached the match aggressively. Luckily, we were able to match her style and take a very important victory,” says skipper Henriette Koch.

The only Swedish team to sail before the winds subsided at lunch, delaying the racing, was Sanna Mattsson and her Swedish Women’s Match Racing Team. Her race against Finland’s Marinella Laaksonen had a dramatic start, when Mattsson’s jib batten got stuck twisted around her fore stay causing her boat to drift toward the cliffs of the famous spectator mountain Släggö. Both crew and boat remained unharmed, but forced Mattson to abandon the race leaving Laaksonen to sail around the course in solitude. The team of mechanics surveyed the boat, and it was soon thereafter back on the course and took the victory in the ProAm race.

Later in the afternoon when the racing proceeded, the race committee was able to complete three further flights in rain and a strong southerly breeze – excellent conditions for match racing, giving Sanna Mattson a chance for redemption as she won her first match of the competition against British Octavia Owen. Danish Henriette Koch secured two additional victories, and is the only team who has secured a spot in the quarter finals with her nine victories out of ten sailed matches. The remaining three direct qualifying spots are still up for grabs, as the other teams at the top have completed an uneven number of matches. Going into Thursday the wind prognosis looks more stable and the ambition is to complete the round-robin to find out which teams will join the Danish team into the quarter final.