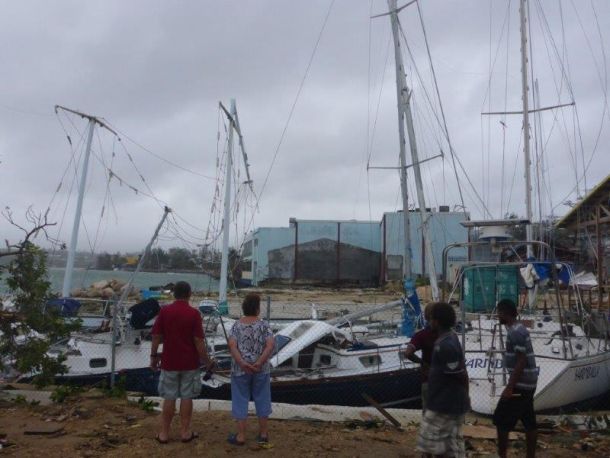 He was touring the islands for his not-for-profit charity Medical Sailing Ministries when Cyclone Pam hit. Here is his story of the storm and its aftermath.

Like many sailors, as a subscriber to Bouyweather.com, I have seen my share of 'warnings' and 'red arrows' in the forecasts I’ve downloaded. But nothing prepared me for last week as I spent eight days in Port Vila, Vanuatu, attending meetings and making plans in connection with our remote-access transport and aid group, Medical Sailing Ministries.

Fortunately, our yacht Chimere was safely in her berth back in Melbourne, but as news of the approaching Tropical Cyclone Pam got worse by the day and all possible windows were being boarded up, I could not resist downloading a forecast for the east coast of the island chain.

The morning outlook for Thursday March 12 read as follows: “Seas N 15 metres, Winds NE 66 to 89 knots.” 89 knots?! Maybe it was a forecaster’s sense of humour or a glitch in the system, I don’t know, but the afternoon’s outlook showed the wind speed abating to 64 to 87 knots. Who would have known that within a day, gusts would be closer to 150 knots and more.

As a Category 5 system, destruction had already been inflicted on Tuvalu, Kiribati and the Solomons and Vanuatu’s northern Torres and Banks islands but as Pam tracked towards the heavily populated Port Vila and the southern islands of Erromango, Tanna and Aneityium it was clear that this was going to be bad, very bad.

Like a bunch of farmers and fishermen, conversation now became consumed by the weather. “It’s tracking towards Fiji” … “No, it’s coming this way” … “It’s going so slowly” … “What time will it arrive?”

Weathering it out – fortunately on land

Meanwhile, a glance outside showed it to be hot and sunny, with a light breeze from the south east – another typical day in paradise – and certainly a case of, literally, the calm before the storm.

As Friday the 13th ticked away, preparations became more focused and purposeful, as the Met Warnings, Travel Alerts and Consular Advisories beeped out via text message. For the fortunate ones like me, with a very solid and comfortable room at the Melanesian Hotel, it was a case of stocking up on bottled water, food, candles and a few other essentials. As the wind increased, however, accompanied by driving rain, our thoughts were with those in the villages, outlying districts and remote islands, where options for shelter were limited and resources few.

Darkness fell, but with street lights shining and the power still on. The rain and wind outside, whilst severe, did not seem overly extreme. Off to bed like normal with the air conditioner doing its best to combat the usual humidity. Around 11:30pm, however, the noise and violence of the wind, accompanied by breaking branches, flying roof iron and who knows what else meant that outside things were far from normal.

The power then went off and the blackness was instant – now, where were those candles again – but the noise outside seemed to just get more and more intense.

As water, twigs and leaf fragments were blasted through the 10mm gap under the door to my third floor room, the thought crossed my mind … “I hope this door holds up. Oh, and the roof too – we are on the top floor”.

Water was also being driven through the barely discernible cracks around the top and sides of the door, making it a constant process of mopping up with towels into the bath; at least for the next four hours.

My non-sailing colleague in the room next door clearly failed in this 'water bailing' exercise, with the morning light revealing a channel of water across his floor. The horror of “water coming in” is clearly a heightened instinct for anyone who owns a boat.

The tail end of the cyclone lingered for much of the day in the form of strong winds and driving rain, but by late morning we ventured outside, along with many others. A quick glance around and pretty soon it was evident that this was no ordinary event. For anyone who has seen the photos and subsequent media coverage, you will know that damage was severe and widespread.

Our instinct was to desperately seek news of our friends and the communities where we have the strongest connections. Information, however, was thin on the ground with rumours of deaths and devastation doing the rounds and eventually passing as facts.

We soon picked up a local minibus and found our way into the outer suburbs of Port Vila – the poorer districts. Past the piles of smashed yachts and boats on the waterfront, past the massive fallen trees, the flooded shops and the dazed locals wandering the streets, to where the modest and humble homes had all lost their roofs and the few possessions people did have were now destroyed – along with whatever food they owned.

Trees now stood mostly without leaves. Even the bark was blown off many branches, revealing the white inner stems. Sheets of iron could be seen wrapped around trees, essential food crops and gardens now lay in waste and with no electricity to pump petrol, most vehicles would be out of fuel soon.

Knowing that the cyclone was tracking in a direct line with the southern islands, we could only fear the worst for the communities in its path.

Down at the waterfront, between the fruit market and the Nambawan Café, where on a normal day you might have taken a helicopter flight, had your hair braided or bought a dress or carved pig, there was a sombre mood as we picked at the piles of rubbish and debris strewn about.

“That belongs to the lady over there”, I was told, as I opened up a bag containing some sodden papers.

“Yes, but it’s all rubbish. This is my boat. What’s left of it”, responded the lady, clearly in a state of distress and pointing to various small pieces of flotsam.

It transpired from our stilted conversation that along with her husband and child, the lady had attempted to ride out the cyclone on the family’s catamaran, attached to a mooring behind Iririki Island. At the peak of the cyclone’s fury, when moorings began to drag, their yacht was caught up in the jumble of hulls, chains, buoys, masts and stainless steel – dragging about half a mile before eventually smashing and disintegrating against the seawall.

The three found themselves in the water, then somehow ending up on 'dry' ground, crawled to the handicrafts building and sheltered for three hours under a table with two others they had found in there. If ever there was a story of miraculous deliverance this must surely be it; the woman had the scars on her body to prove it.

Strewn over the next 200 metres could be identified pieces of boat, some small, some slightly larger – a chart table, exhaust hose, roller furler, fragments of sail, sodden charts, edges of a seat, a battered water tank, broken spars and twisted stainless steel wire and fittings.

A few hundred metres on there was a 40 foot long shipping container that had simply blown onto its side, next to another yacht lying like a beached whale with a group of lads already helping themselves to whatever they could carry away.

Back at the Melanesian Hotel, management and staff did an amazing job of keeping 'normal operations' going as they juggled the needs of their own guests plus those relocated from other resorts.

Just below the surface though, the feelings of loss were evident. I think of Lucy, on the breakfast shift, who would always smile as she greeted me each day with … “Good morning Robert”. After eating my cereal Lucy would see me reach for the bread and quietly say … “Your eggs are ready for you now Robert”.

Two days after, Lucy was back at her post and when I asked … “How did you go Lucy, how is your home?” … Lucy looked into my eyes and with a wave of the hand said softly, “all gone, house is all gone.”

What do you say to that, as you sit down for a lovely breakfast, slightly inconvenienced by the lack of air conditioning and by having fried bread, instead of toasted?

Like everyone, I have seen the images of cyclones past. Tracy, Andrew, Bola, Katrina – every year it seems a new one, or two, get added to the list – but to feel a cyclone firsthand and then to see its impact on the people and communities you have come to know and love over many years, gives it all a totally new and infinitely deeper impact.

Whilst 'Day one' brought a natural sense of helplessness – understandable in the face of such overwhelming loss – it has been uplifting to see a range of aid groups, charities and governments chipping in to prioritise needs and deliver much-needed resources.

Sadly, despite everyone’s best endeavours, many on the remote islands and in the distant villages will miss out. Isolation, plus a combination of poor transport and communications combine to ensure that once more, self-reliance and resourcefulness are the best guarantees of survival.

Medical Sailing Ministries (MSM) was formed in 2008 to assist in delivering medical services where they are most needed. A service more desperately needed now than ever before – not just for medical services, but for most everything, including tarpaulins, tents, mosquito nets, school books, food, water tanks, soap, petrol, fishing tackle… the list goes on.

With business and family commitments back in Melbourne and my planned stay in Port Vila over, I was fortunate in being able to catch the first commercial flight home on Monday 16 March. However, whilst my feet might now be under my office desk, my heart and head are still very much back with the people of Vanuatu.

If you would like to respond in some way, I'd certainly encourage you to give generously to one of the many aid groups operating in Vanuatu. Alternatively, if you are planning a cruise to Vanuatu this year and you’d like to assist with a co-ordinated approach to aid delivery while you are there, please contact me through the MSM website. I look forward hearing from you.