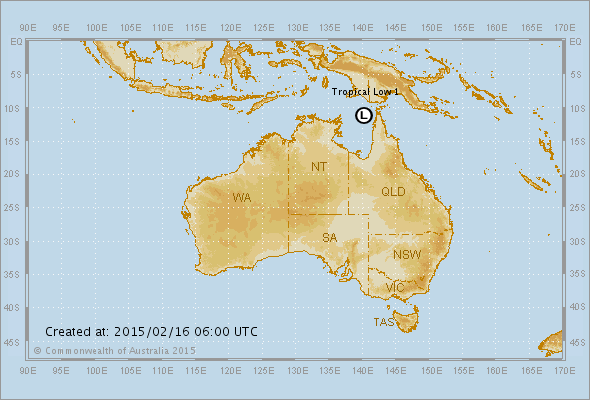 The Bureau of Meteorology has issued the following tropical cyclone warning for Far North Queensland:

Media: The Standard Emergency Warning Signal should NOT be used with this warning.

Badu Island to Cape Keerweer in Queensland and Nhulunbuy to Cape Shield including Groote Eylandt in the Northern Territory.

Location: within 55 kilometres of 11.3 degrees South 140.2 degrees East, estimated to be 235 kilometres northwest of Weipa and 385 kilometres east northeast of Nhulunbuy.

Movement: northwest at 13 kilometres per hour.

The tropical low is expected to become slow moving overnight and may reach tropical cyclone intensity over the northern Gulf of Carpentaria during Tuesday.

GALES are not expected in coastal areas within the next 24 hours, however gales could develop later.

People between Badu Island and Cape Keerweer in Queensland should consider what action they will need to take if the cyclone threat increases.

– Information is available from your local government

The Territory Controller advises communities in the Northern Territory under Watch that now is the time to finalise your emergency kit, clear your yards and balconies, and commence home shelter preparations.

If you DO NOT have accommodation constructed to the Building Code or are unsure of your present accommodation, you should determine NOW where you will shelter. This may include arranging to shelter with family, friends or in public emergency shelters, or strong buildings, where available in your community.

This advice is issued to allow you sufficient time in which to take the necessary precautions before winds reach a dangerous level.

Please ensure that friends, family and neighbours have heard and understood this message, particularly new arrivals to the area. Further advice on cyclone emergencies in the Northern Territory is available at www.securent.nt.gov.au

A map showing the track of the cyclone is available at: http://www.bom.gov.au/cyclone