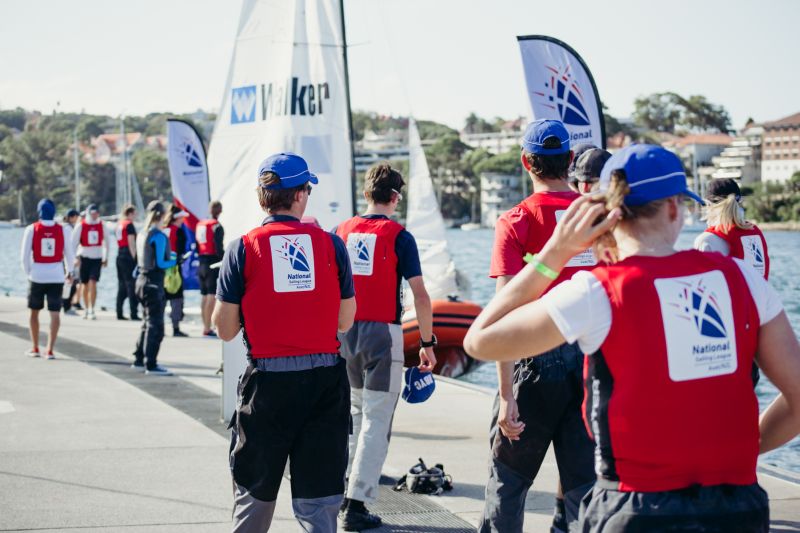 The Royal Sydney Yacht Squadron’s open team led by David Chapman is the one the CYCA and others are chasing down.

The Cruising Yacht Club of Australia was the big mover on day two of the National Sailing League Final on Sydney Harbour, the Sydney club’s open and junior teams leapfrogging into the top three standings after 18 races back-to-back.

At the end of racing on day one the CYCA youth team was sixth from 14 teams on the scoresheet and the open team seventh. It’s a different ending on day two, Saturday April 27, the open team skippered by Reginal Lord second by three points and the youth team, skippered by Tom Grimes third overall, four points off their clubmates.

Highlights from day two thanks to Tilly Lock

The Royal Sydney Yacht Squadron’s open team led by David Chapman is the one the CYCA and others are chasing down, seven wins from 11 races putting the host club in a favoured position to take up an invite for the Sailing Champions League Final in St Moritz, Switzerland, this August.

Back ashore for the daily post-race BBQ and catch-up, youth skipper Grimes said, “We found our mojo at the end of yesterday. Today was about juggling the aggression level given this format falls somewhere between fleet racing, which tends to be more friendly, and match racing where everyone’s yelling at each other constantly. Today we figured out how aggressive we need to be, particularly with some of the older guys, they are hitting it pretty hard.”

America’s Cup sailor and past Etchells world champion Ben Lamb, who is on jib and tactics for the CYCA open team, said, “I think the format is awesome, the whole five-on-five boat races of around 12 minutes each.”

Royal New Zealand Yacht Squadron’s open team will automatically be granted the Sailing Champions League Final wildcard for 2019. They are sitting in fifth overall and bowperson Erica Dawson had this to say: “The NSL is a really cool format, super tight and quick racing, especially today when the boats were much closer. I think it’s a cool way to capture a large variety of people – different ages, ability and gender, it’s not too expensive and you don’t have to own a boat. Sometimes it feels like you go Olympics or you don’t sail, this format offers something in between and I’m looking forward to talking to our club about it when we get home,” added the Nacra 17 Tokyo 2020 hopeful.

At the end of Sunday’s six-race qualifying series the top four teams go through to the Finals and the first team to win two races takes out the Australian and New Zealand debut league event. But there’s a twist. The winner of the qualifying round takes a first place into Final, their recognition for previous dominance, so they only need to win one more whereas the other three teams need two wins.

The earliest warning signal for the final day of racing off the RSYS at Kirribilli is 9am on Sunday April 28 with the Final expected to get underway between 1pm-2pm.