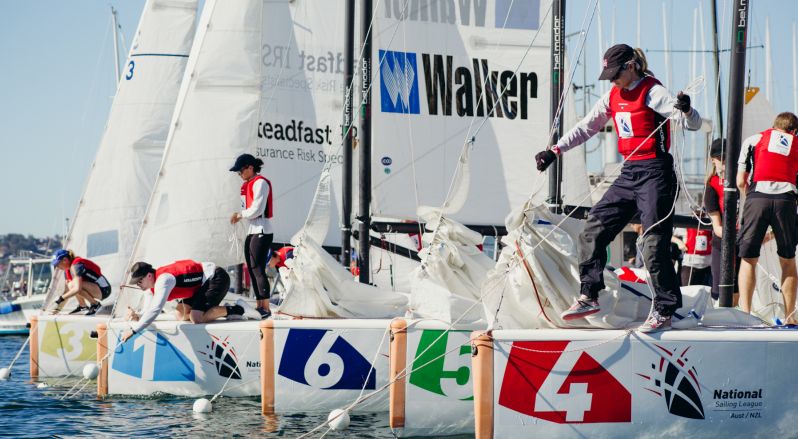 Day one of Australia’s first-ever league style sailing event on Sydney Harbour brought 14 teams from clubs spanning Perth to Auckland, New Zealand, together for a brilliant hit-out of 15 races in a mix of autumn conditions.

Highlights from day 1 thanks to Tilly Lock Media

Leading the National Sailing League Final pointscore after five flights is the home team, the Royal Sydney Yacht Squadron skippered by David Chapman, and second by two points is the team from Royal Freshwater Bay Yacht Club in Perth skippered by Shelley White. A second RSYS team, skippered by Jack Littlechild, is third overall and first youth team on the ladder.

“It was nice to have racing so close to the Squadron; it was ideal stadium sailing,” said Chapman after racing. “The PRO did a great job getting all those races in in very tricky conditions. It’s a mixed fleet – some really good teams and those who are learning. It was very tough and really good fun – probably the most fun day I’ve had sailing this summer.”

Given how many events the renowned tactician contested globally this past season it is high-praise for the start-up where teams fly in to tackle an ambitious schedule of short umpired races using one design race-ready boats with the aim to be the last club standing by Sunday afternoon, April 28, 2019.

Principal Race Officer Ian Humphries and NSL directors Mark Turnbull and Howard Elliott welcomed competitors with breakfast and a briefing at the RSYS before the first round got underway off Kirribilli in light WNW winds. A funky transition period at lunchtime preceded a warm and solid Sydney westerly gusting to 20 knots at times, which wrapped up the afternoon flights.

Encouraging competitor feedback, a scenic Sydney Harbour backdrop of the Sydney Opera House, Harbour Bridge and Fort Denison and the drama of near misses and boats separated by seconds on the start and finish line are boxes organisers can happily tick off after the opening day. The NSL’s realisation of a concerted effort to encourage women to participate is a more significant achievement. Five of the 14 competing teams at the inaugural league event are skippered by women and four teams are all-female, plus every open team has at least one female aboard, a requirement of the Notice of Race.

“With the requirement for each open crew to include a female and a separate women’s category there’s a really healthy gender balance at this first league event, one of our key drivers,” said Turnbull, an Olympic sailing gold medallist from Sydney 2000.

The earliest warning signal for racing on Saturday morning, April 27, is 9am and the forecast is for SSW – S – SSE winds 15 knots in the morning then lightening off as the day progresses.

Boat owners are encouraged to take private vessels out to spectate fast-paced umpired fleet racing at its best using Elliott 7s with teams rotating boats on the water and short races, just 12-15 minutes per race.