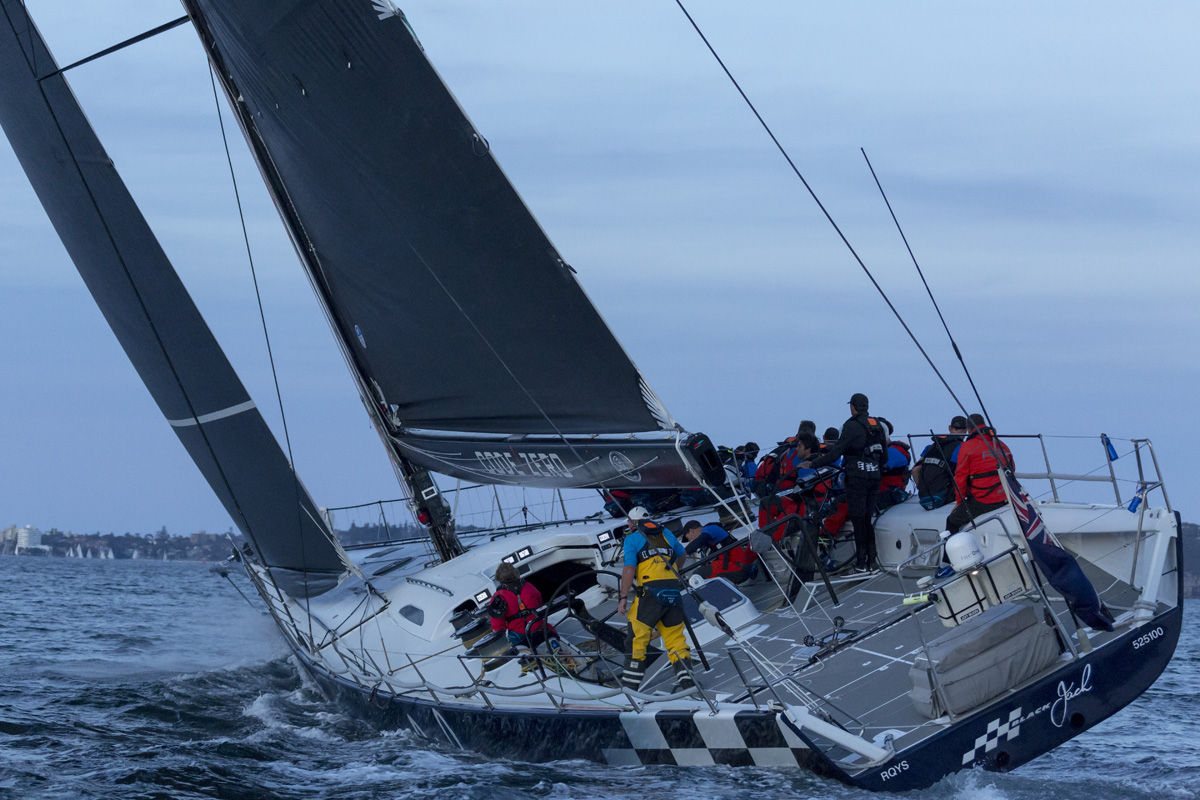 Peter Harburg’s hundred-foot Reichel-Pugh, Black Jack, was the first across the line after leading from the start and building a healthy advantage over closest rival Wild Oats XI, the legendary boat retiring while on the return from Cabbage Tree due to time constraints.

The race itself will be remembered as a light wind race with a challenging start which saw two general recalls due to boats being over the line.

A collision on the second start between Eve and Komatsu Azzurro resulted in Komatsu retiring from the race, thankfully with no injuries reported.

After the third start the boats were off and out the heads, Black Jack leading from the front ahead of Wild Oats XI and Wild Oats X.

Before the race Black Jack’s skipper Mark Bradford had identified the light forecast as an opportunity for their boat to perform to its strengths, and for overall winner on IRC, Zoe Taylor’s G.O., it was the same.

“I definitely wasn’t expecting it when we lined up on the start line on Friday night. We rushed out of the yard, rushed to the start line, but it was pretty nice sailing for a lot of it, perfect conditions for us. There were tricky parts as well when we ran out of wind but our crew were fantastic.

“To get first in all three divisions at the weekend was incredible, I’ve got some really good hands around me.

“Just coming up the harbour we were starting to run out of wind and time was against us – St Jude were closing in – but thankfully we got there in the end.

“This is our first Blue Water, we’ve gone from zero to one hundred in a matter of months, so it’s all coming together in a really nice way.”

Applying much of the pressure to the winners were second placed on IRC, St Jude, owned and skippered by Noel Cornish. Despite finishing runner up, the result propels St Jude to the top of the Blue Water Pointscore overall standings ahead of Derek Sheppard’s Black Sheep and Sam Haynes’ Celestial.

Speaking after the race Cornish commented, “We’re very happy to get a result like we did at the weekend. It’s very unusual to have two general recalls and we feel sorry for those involved in the collision. It would have been very disappointing for those guys.

“All in all it was a slow race, usually we would be going round Cabbage Tree Island at dawn on Saturday and we got round around 9am. For us it was especially light getting around the island. It took us a long time to negotiate our way round in light and flukey breeze. We had a fairly steady run home though, under a building northeasterly breeze.”

Speaking on the recent good form which has seen Cornish and his crew at the top of the overall standings the CYCA Rear Commodore was typically humble, “There’s no one thing but many many things which have come together over the years. It’s an overnight success which has been ten years in the making!

“We’ve made some changes to the boat and we’re very happy with those. Fortunately, we have a very committed crew and you can see that coming through in the results.”

Meanwhile in the battle of the big boats, Black Jack skipper Mark Bradford was delighted to have his boat shining in light conditions. An area they’ve worked hard to be strong in.

“It was a good race for us, excellent actually. As Pete (Black Jack owner Peter Harburg) said, it’s nice to have our thinking validated. We saw conditions which we think we are going to operate in the best, and we’ve proven that is the case.”

2017 has been an exciting year for followers of the Black Jack brand. The hundred-footer debuted in its latest form in the CYCA’s Land Rover Sydney Gold Coast Yacht Race back in July but after extensive work, the boat nearly didn’t make the start line.

Bradford highlighted that it was different in the Cabbage Tree Island Race, “This time we have our race group together, we’ve got our head around the sails and the configuration a bit more, all the stuff that takes a lot of discipline behind it, tuning guides are all organised now.

“We’re in the final details of getting the boat prepared whereas the July race was about pulling it together as we went. This was a bit more planned and a bit closer to how we like to do our sailing.”

When asked about getting the win over Wild Oats XI Bradford said, “They’ve just been so good for so long and it’s so hard to beat them because they have a great asset and a great group. Just the way they go about it is so professional so any time you win over them it’s fantastic.

“I think this one for us was really important because we won convincingly – it wasn’t a lucky shift at the end – we led from the start all the way to the end.”

Full results and overall standings can be found here