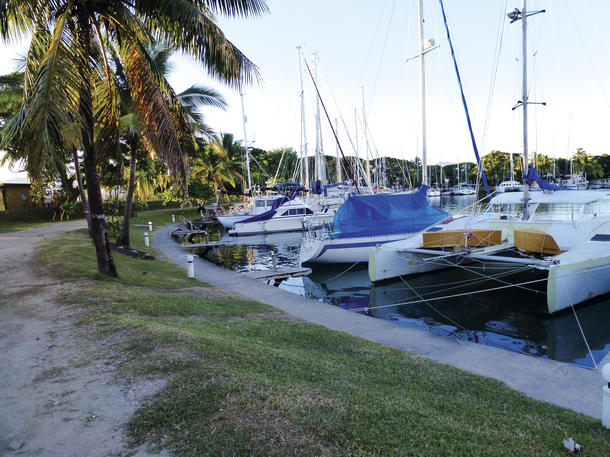 One could say, I have reasonable experience, skills and knowledge to complete an offshore passage.

Preparation is the key to a successful passage or voyage. We all know that too well. There are no cursed passages, there is bad preparation or bad planning.

The following story should warn others, that even an experienced sailor can make basic mistakes and take wrong decisions
under certain circumstances, can lose his/her usual vigilance while acting under pressure.

Three years after the economical crash in September 2008, I was desperate to undertake a project. I was forced to sell my beloved Swanson 36, my finances did not look too bright. I decided to withdraw all my superannuation and buy a yacht. I found one in Fiji.

The owner was a New Zealander. I had very positive experience with Kiwis from the past. I trusted this fellow, the boat was supposed to be in a very good condition, ready for the sea.

Trying to save money I did not fly to inspect her, first egregious mistake. I paid the deposit and bought a one way ticket to Fiji. She looked okay on deck, down below was a different story. I was not happy, but I felt committed, did not want to lose four grand deposit. Second big mistake.

At the end I lost much more.

I ground my teeth and got to work. Whatever I touched was not working or was not working properly. I started to run out of funds. I had to take a few shortcuts. Third mistake.

A few months passed, the boat was looking better and was almost in satisfactory condition. My good friend offered his help in sailing her back to Australia. It was all great apart from a small inconvenience, he had a specific date to be back in the country due to family obligations.

Upon his arrival we lifted the boat out of the water, then came two coats of the bottom paint, back in the marina, final check and clean up then the wrong decision (next mistake) not to finish repairs to the windlass.

I checked the weather. It did not look too good: 30 to 40 knots for the next three days at least. In any other circumstances I would have waited, however being under pressure of time restraint, I gave in.

Not a big deal, we had been in heavy weather before. Next big mistake!

By the time we reached the pass between reefs leading into the open ocean, it was dark and 20kt inside the lagoon, quickly became 35+. We reefed the jib and the main had to come down. Luckily, the wind blew from aft of the beam and the windvane kept a reasonably, steady course.

The low coaming cockpit is pretty wet, in four metre seas a foot of water on the cockpit floor is a norm. The boat also started to leak considerably, worst at the cap shrouds. The going was wet and tough, however we were safe and a good wind vane was a blessing.

After two days and three nights came the typical calm with very confused seas. I turned the key and the engine fired up perfectly. Not even five minutes gone and it died as quickly as it started.

The reason was obvious, water in the system. Could have been easily dealt with when in port (mistake again). After an hour of acrobatics the fuel was clean and engine running, but the wind picked up again at midnight.

I favour a three hours on/three hours off watch system. But now we were on for six to seven hours.

Adding to that heavy weather, we were both very tired. Passing Vanuatu to starboard and pressing on was probably OK, but we should have broken the passage and get a short rest in Noumea or in one of the bays along the inner passage. Dry the boat and ourselves, have a decent meal.

Temptation to make it in one go and on time was too strong for my friend, the final decision was mine and I agreed to sail by, destination Brisbane (another mistake).

Two days passed, our sailing conditions improved, there was less water onboard. Why it always has to be in the middle of a dark, moonless night, when something goes wrong?

Almost smooth sailing, 20kts, then ‘bang’, somewhere forward on deck. Bang again, it is not an odd wave, better go and check.

This time I left the weather jacket, put on a sacrificial jumper and there I went. The anchor, must be loose, why did I not check it after the initial blow? At that stage it took almost an hour to fix the broken pennant, hanging with one hand to the boat for my life (mistake again).

The light was fading, we could still see the contour of Ile de Pines. The sea was very confused and lumpy, must be the effect of the island and current. We helped the sail with the engine, bearing off the island further away.

All seemed well, I had put a waypoint earlier, three nautical miles off the reef extending south south-east of the island. Big mistake! Should have allowed ten, even 20nm. Better be late and safe, than dead on time.

Suddenly, a big bang, bigger than before. I was on deck in no time, pitch black, wind maybe 20, maybe less, sea steeper, shorter. I knew we were on a reef, not ‘high and dry’ yet, but pretty soon.

The tide was ebbing, it was raining, there was not much we could do. I knew, we were inside the lagoon, probably stuck on one or more of the coral heads scattered around.

Checked on my friend, he was a bit confused, but OK. The banging noise was horrendous, we could feel the boat could fall apart at any time.

But she did not, she was built 30 years earlier in times when fibreglass boats were built heavily, built to last; when builders didn’t exactly know how strong was the new material.

I went back below and checked on any leaks, she was wet as before but not worse. Turned on my handheld, turned the radio and called “Noumea Radio, Noumea Radio …” It must had been just after midnight, maybe later. It was going to be a long night.

After an hour or so, the banging was less. With the ebbing water, our boat started to settle on the reef more permanently.

The Coast Guard responded promptly and help was on the way. It was still dark when the sea started to rise lifting the boat. Soon she began to drift slowly, bumping on coral heads below. I looked in the direction of our drift and a cold shiver went through my spine. In the first light of dawn, not more than 200 metres ahead, I could make up white water breaking on top of the outer reef.

There was no time to waste. I jumped out and ran to the bow as quickly as I could, releasing the anchor hoping it would dig in soon. To my relief it did.

The old lady was safe for now. I turned around and I saw the rescue boat half a mile away, “perfect timing,” I thought, “well done boys.”

It all took not more than half an hour to have us in tow. Remember what I said at the beginning? We didn’t fix the windlass. What a mistake! I had to cut off a perfectly good 35 pound anchor, 50 metres of chain and some rope. What a waste!

We left the unfortunate place just in time, with barely a foot of water under the keel. Our rudder was bent, our track was 10m to starboard, parallel to the rescue vessel. At 7kt we would never make it before dark. They took us to the first sandy cove and in the lee of this small island they dropped their hook.

Our rudder was punched out of its bearing, it was bent quite badly. From that point on, she started to leak heavily, fast. The time was to bring help on board from the towing vessel. At that point, I and my friend went off the yacht.

The four Frenchmen were very professional and well trained, with the right equipment at hand. The rescue mission went smoothly and efficiently. I can easily say, they saved my boat, I was very grateful.

It was almost dark when we approached the hardstand in Nouville Plaisance, located across the bay opposite Port Moselle Marina. The crew from a local TV station and newspaper greeted us on shore.

A visit to Noumea Hospital was recommended; I forgot to mention, through all the passage from Fiji, my friend had torn his Achilles tendon. I had not believed him, but it was confirmed in Australia. He must have gone through hell, I wondered if he would ever go sailing with me again.

He did, he flew to Melbourne, saw a doctor, attended family matters and after seven weeks returned to New Caledonia.

The boat was fully repaired, stronger than ever. Nine days later we landed in Manly, Brisbane. The landing is a story by itself and I am going to write about it another time.