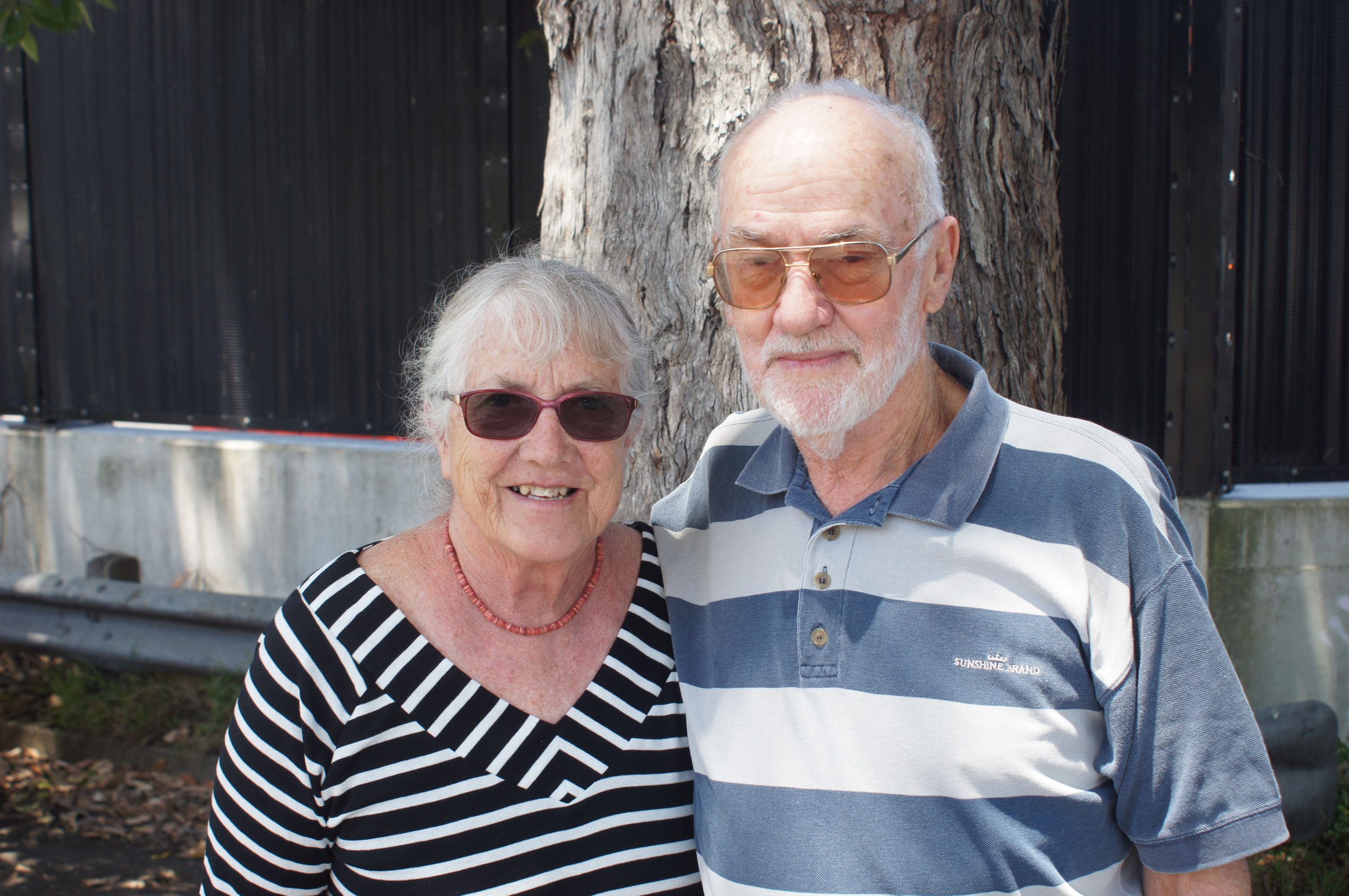 Alan and Patricia Lucas: not often seen standing in front of a tree!

Alan and Patricia are one of the first nominations for the inaugural 'Cruiser of the year' award. If you want to nominate someone you think worthy then read to the bottom of the story and click on the e-mail address below.

Anybody who has cruised the eastern Australian seaboard will know of Alan Lucas and his wife Patricia.

Born in Sydney’s Mascot, July 1936, Alan was immediately drawn to sailboats. His first boats were built from scavenged materials found after the Second World War, such as airplane belly tanks to corrugated iron canoes and kerosene drum rafts.

During his teens he enjoyed occasional skiff racing and became the owner and restorer of an old launch. Alan was trained as a commercial artist, which can easily be seen by the drawings and paintings that accompany his stories in both Cruising Helmsman  and Australian Sailing.

While building his own 31 foot cruising yacht Rendezvous, he became a foundation member of Australia’s Junior Offshore Group (JOG). This club  was begun in the UK in  1950 by Captain Illingworth to allow small boats with  a waterline between 16 to  20 feet to compete in offshore races.

By 1960 with his boat built, he moved aboard, took off and has never lived ashore since; except under special circumstances.

Four years later he wrote the first edition of the essential manual ‘Cruising the Coral Coast’.

The following year, 1965, Alan attained his Master 4 ticket for all east coast Queensland, Torres Strait and across the Gulf to Weipa. He then odd-jobbed his ticket over the next thirty years, but mostly spent his time cruising the east coast as well as PNG, Solomons, NT, Timor and more.

Alan’s next yacht was a 28’ steel cat boat, which he used during the early 70s to resurvey Australia’s east coast from Eden to the Torres Strait for the second Coral Coast edition and his first ‘Cruising the New South Wales coast’ guide.

Patricia met Alan in 1973 in Sydney. She was a widow with three young children. Producing the first guide was her first experience at deep sea sailing and the love for the lifestyle started then and there, raising the three children along the way.
In 1974 Alan sold the cat boat and restored a motor sailer Silver Spray to resell after cruising the NSW coast first. Two years later he built a 60’ three-masted ferro-cement schooner Alegrias, which he used to cruise New Caledonia, Vanuatu, Solomons and PNG for the fifth time. During this time Patricia and Alan had a son.

The schooner, however was too expensive to run and they sold it in 1980. Alan’s next venture was to buy a ferro hull and deck in Darwin where they fitted her out before a six year world circumnavigation on Tientos.

After selling Tientos in 1988, Alan bought a near-derelict wooden ketch, Renee Tighe, and fully restored her at Gosford. Launched 1990 they cruised her twice to Torres Strait and the NSW coast six times before selling her to build their current vessel Soleares at Maryborough.

Soleares is a 50’ shallow draft centre-boarder based on the Chesapeake Bay Skipjack design. She has done four full-length east coast cruises and numerous part east coasters.

Besides their own sailing Alan and Patricia have conducted numerous deliveries. Their favourite being Rome to London via the French canals.

In November 2010, Alan Lucas was awarded a NSW Maritime Medal for his coastal guides and support of cruising In 2015, Lucas was presented with the Medal of the Order of Australia.

In total, he has published: nine cruising guides, two of which have been revised nine and six times; plus five boat building manuals, one illustrated encyclopedia of boating and seven general interest books (about sailing naturally).

His new book to be released soon is ‘Simple solutions’, a fully illustrated practical look at solving many onboard problems. Full of many of his own drawings, of course.

To find out more about this long overdue recognition of the cruising community click here:

Cruiser of the year.

Then send your nomination and any supporting material to the editor of Cruising Helmsman: