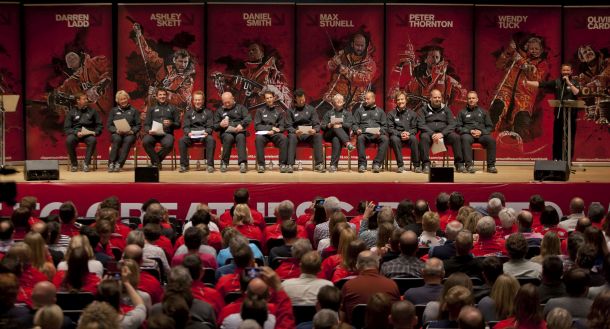 Hundreds of amateur sailors assembled in Portsmouth Guildhall today to discover which team and professional skipper they will be sailing with later this year in the world’s longest ocean race. They will be competing in the tenth edition of the biennial Clipper Round the World Yacht Race which departs from London on 30 August.

Clipper Race crew, who will spend up to eleven months traversing the world’s most challenging oceans, came to Portsmouth from all over the world, including North America, China, Australia, New Zealand, South Africa, Mexico and across Europe, together with a strong contingent from across the UK.

The twelve teams were addressed by legendary yachtsman, Clipper Race founder and Chairman, Sir Robin Knox-Johnston, with encouraging words about the challenge and adventure that lies ahead.  He commented afterwards: “This is where final preparations for the race of their lives begins. Most of the crew have almost completed their training but now they can start to develop their strategies and dynamics as a team.”

The global appeal of the Clipper Race continues to grow, with crew joining the 2015-16 edition from Lebanon, Latvia and Colombia for the first time.  Lebanese crew member Moussa Tawil flew into the UK via Doha and Istanbul to find out who he would be sharing his round-the-world adventure with:  “I'm super excited about the whole thing.  Today is quite significant as I'm sharing thoughts on tactics and finding out more about what role I'd like to play on board.

“I see this as an opportunity to test myself and think I'll manage well.  I’d like to be part of a really fun crew.  When I first signed up I didn't think much about winning, but the training has made me think more about what needs to be done to win this race.”

The Clipper Race is a unique event; it is the only ocean race to give amateur sailors the opportunity to sail around the world and at 40,000 miles it’s the longest around the planet. Many are complete novices before embarking on their extensive training and over 600 international crew will sail one or more of eight legs around the world, with around a quarter achieving the ultimate sailing experience of a full circumnavigation.

Sir Robin added: “It is important to remember that Mother Nature does not make allowances and the more the crew learn about seamanship, the safer they will be and the more they will enjoy the adventure. Over the next year they will all gain more experience and mileage in their log books than the average sailor gets in years. It will be fantastic at times, frustrating at others, but overall it will be a life fulfilling experience they will never forget.”

For the first time there will be two female skippers in the race, Wendy Tuck from Australia and Diane Reid from Canada.  There will also be the first French skipper, Olivier Cardin and the first Ukrainian-German skipper, Igor Gotlibovych. At 27 years old, Igor is the youngest of this edition’s skippers and his team will represent the Chinese Olympic sailing city of Qingdao.

Igor says: “I feel very proud to be representing Qingdao.  I was born in Ukraine, grew up in Germany and have lived in England for the last eight years, so there are many places that I can call home and now I can add Qingdao to that list.

“I am thrilled to finally be allocated my crew.  I have met some of them during their Clipper Race training but of course we did not know we would be racing around the world together in the same team. We are a cosmopolitan bunch with people from all over the world who are very excited to get to know each other and to building on Qingdao's legacy in competitive sailing.”

The crew come from vastly different backgrounds and professions but all have a thirst for adventure. The Clipper Race is regarded as one of the hardest endurance challenges on the ocean and races between six continents over eleven months. The organisers provide twelve identically matched 70-foot yachts, that made their debut to the race in 2013, and each team is allocated to avoid any one crew having an unfair advantage. It is ultimately down to how each team develops and how well they sail that will ultimately determine the winner of the Clipper Race Trophy with maximum points at the end of the race. Each team will represent a destination, organisation or brand.

Followers of the Clipper 2015-16 Round the World Yacht Race can look forward to some exciting and exhilarating racing. The departure ceremony takes place in London on Sunday 30 August.