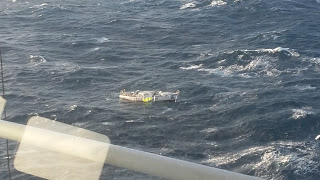 The 13 British crew and one US national whose 60ft yacht, the ‘Clyde Challenger’, sent an emergency beacon alert, which was picked up by the UK Coastguard at 8.00 pm on Thursday evening, have been rescued. All are safe and well, having been rescued by a sea boat off of HMS Dragon this afternoon. The vessel was about 400 nautical miles west-south-west of Cape Finisterre when it became dis-masted and lost its rudder due to bad weather.

The UK Coastguard’s National Maritime Operations Centre coordinated the long-range search and rescue mission. The Coastguard used satellite communications to request vessels able to assist the yacht to contact UK Coastguard and several responded with offers of help. The first merchant vessel on scene was the ‘Industrial Challenger’ on the evening of Thursday 9th. It established contact with the Clyde Challenger and communicated with UK Coastguard about the issues with the vessel and the wellbeing of the crew.

A C130 Hercules aircraft from 47 Squadron RAF Brize Norton arrived on scene at 8.00 am on Friday 10th and immediately located the Clyde Challenger. It provided on-scene communications to all of the vessels, aircraft and operations rooms involved in the mission. The Hercules was soon joined by the bulk carrier MV Cape Breeze. Due to the storm force conditions on scene the master of the bulk carrier deemed it too dangerous to close on the stricken yacht to facilitate a rescue.

The merchant vessels ‘CPO Finland’ and ‘Sti Dama’ arrived on the afternoon of Friday 10th at which time the Hercules was replaced by a US Air Force KC 135 Tanker from 100th Air Refuelling Wing based at RAF Mildenhall. With weather on scene still precluding rescue efforts the MV Cape Breeze and Sti Dama were released. The CPO Finland remained on scene and attempted – without success – to rescue the crew three times.

Following liaison with UK Coastguard, on the evening of Friday 10th, the Royal Navy’s Type 45 Destroyer HMS Dragon began making its way towards the Clyde Challenger’s position 500 nautical miles away.

Prior to the arrival of HMS Dragon the US Air Force 352nd Special Operations Group V22 Ospreys based out of RAF Mildenhall were cued up to attempt a long range option but due to the weather on scene this option was not viable.

On the morning of Saturday 11th the first of two US Navy patrol aircraft out of US Naval Air Station Sigonella (Sicily), replaced the Tanker aircraft as on scene communications coordinator. The merchant vessel Antimilos also arrived on scene.

The Royal Navy T45 Destroyer HMS Dragon arrived on scene on Saturday 11th at 2.45 pm and began the rescue of the 14 sailors using their Pacific 24 foot Sea Boat. All crew had been rescued by 4.50 pm and the 14 crew are proceeding to a safe port on board the warship.

Other vessels that responded but did not participate in the search and rescue mission were the: Marco Polo, Afric Star, Ugale, and a Portuguese warship.

HM Coastguard would like to thank all those that took part in providing a successful outcome to this complex long range search and rescue mission.

Footnote: Clyde Challenger was a 60ft ocean racing yacht designed and built to compete in the Clipper Ventures round the world yacht race. Clyde Challenger has circumnavigated the globe four times, completing a 40,000 mile route in each race. Until this incident she was used as a training vessel, located in Scotland.