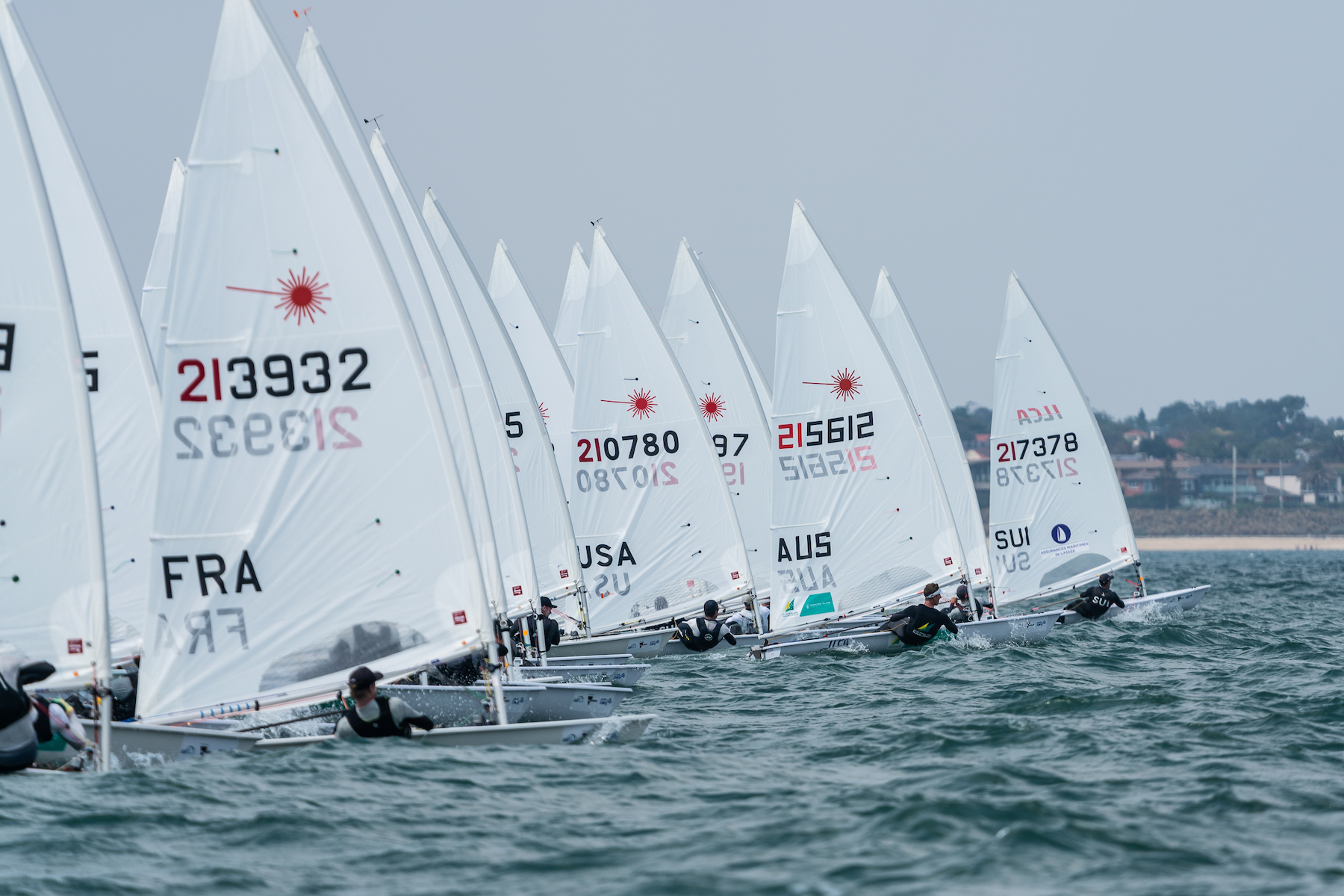 Lasers get off the line - Beau Outteridge pic

Following a very windy first day, Port Phillip delivered a cracking day out at the 2020 Sail Melbourne International; Saturday starting with light conditions before the wind picked up again, making for a fitness and skill focussed day.

On Friday, only one race had been possible in most fleets and Saturday’s aim was to get the maximum number of races in. With three and more races on the schedule, leader boards started to take shape.

Laser Fleets
The Laser, sailing out of Sandringham Yacht Club, make up the biggest numbers, with the world’s best sailors using the event as a warm-up for the Laser Standard and Laser Radial World’s in February.

Wearn, who has been selected to represent Australia at the Tokyo 2020 Olympic Games, did not have the best start, posting a 24th in race one, but followed up with a win and an 11th place and is fifth overall.

“It was an interesting day that was a bit effected by the weather systems going through at the moment – but a pretty average day for myself to be honest,” Wearn admitted.

“I did come back with a first in the second race, but couldn’t replicate that in the third, so I think I made a pretty big come back to get somewhere near the top ten in the last one. Let’s hope the next half of the regatta is a lot better,” he said.

“I did a good regatta since yesterday. It is pretty windy and sunny, so it’s perfect with good conditions. Today the wind increased all day and with the three races I am a bit tired now,” Baptists-Bernaz conceded.

Following his second place on day one, Tom Burton continued with two top five finishes and a 17th on Saturday.

“It was an OK day – a bit of a fitness day with three races. I think I got two good ones and an average one, but my expectations aren’t too high, so we will see where we end up at the end of the week,” Burton said.

In the Women’s Laser Radial, Olympic champion Marit Bouwmeester continues to lead after scoring two third places and a win in the last race of the day. Norway’s Line Flem won the second race and is second overall.

Third in the Women’s is Rio Olympian, Silvia Zennaro (Italy), who is ranked sixth overall after posting 2, 8, 3.

“It was another windy day, but I like windy, so it was really good. I am here for one month, it is like home, and I enjoy every day with the amazing conditions,” Zennaro said.

Western Australian Zoe Thomson is the top ranked Australian. She posted an 8-12-5 results and said, “We’ve had fresh conditions so far with some good waves. Compared to home (WA), it’s a little more inconsistent here, so I’m not too sure what to expect tomorrow.”

The overall Laser Radial fleet is led by Michael Compton. He continues to impress after winning the Australian Youth Championships and being selected to the 2020 Australian Sailing Youth Team. The West Australian has so far scored 1,7,2,1 results.

In the Olympic RS:X windsurfing class, some of the world’s best windsurfers are in Melbourne, with the class championships to take place at Sorrento Sailing and Couta Boat Club at the end of February.

While Rio Olympic champion, Charline Picon (FRA) has already secured her Tokyo spot, Israel’s Noy Drihan is still fighting for national selection. The RS:X World’s in four weeks is the final competition and four women from Israel are at Sail Melbourne to prepare.

Drihan kicked off the event in style, with three wins on day one, and defended her lead ahead of Picon with a fourth, second and first on day two. Picon won the first two races on Saturday and finished the day with a fourth.

“Not very stable conditions; it was very tricky and gusty. Sometimes we had a storm gust and sometimes no wind at all, and a lot of shifts,” Drihan remarked.

“You needed to play a lot on the upwind, and also on the downwind, and always look where the gusts and the good angles were to sail.

“The world championships in Sorrento are the last selection event for the Israeli girls, so this is our final selection round,” Drihan explained.

All of Israel’s best windsurfers are in Melbourne and as for the women, the world championships will also be the Tokyo 2020 decider for the men.

The Finn class is the other Olympic class at Sail Melbourne in which sailors are still preparing for their Tokyo 2020 Olympic selection. Switzerland’s Nils Theuninck is making the most of his time in Australia to get there and won the second race of the day. .

“I have been training here for a month and a half. We had the Finn Gold Cup, and conditions are different every day, so it’s really nice to get some different waves, learn and get your right numbers every day. I am trying to learn as much as possible and get ready for the European season coming soon,” Theuninck said.

While it was the second day of racing for most, in the Invited classes the Tasar sailors had their first day, because winds were too strong on Friday.

Three races were completed with Victorians Heather McFarlane/Chris Payne leading after posting a second and two wins. Gary and Robyn Ratcliffe (NSW) are in second with Megan and Bronwyn Ridgway (VIC) in third.

“We had a nice breeze and the waves were a lot less steep than they were yesterday (Friday). It was really hot competitive racing. Three of us were crossing the finish line together, so it was super close, and each of the following races were neck and neck,” Sandringham Yacht Club’s McFarlane said.

In other results, Michael Leydon (ACT) continues to lead the 2.4mR, while South Australian Bob Schahinger leads the Liberty. Western Australian Tracy Odiam is the top female sailor in the Liberty and sits in fifth overall after four races.

Sail Melbourne also includes the 2020 Australian Kite-foiling Championships which started on Saturday with six races in the mixed-fleet.

Seventeen year-old Scott Whitehead from Townsville in Queensland kicked off the Australian Championship winning four out of the six races and finished second in the other two.

His sister and defending national champion, Breiana Whitehead, is ranked overall fifth and first female after day one of the event.