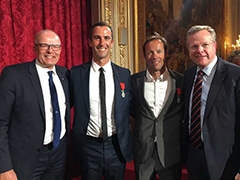 In France, offshore sailors are sporting heroes, up there with footballers and Tour de France cyclists in the national psyche.

French sailors Armel Le Cleac'h and Thomas Coville have been awarded the National Order of the Legion of Honour at a grand ceremony at the Elysée Palace in Paris.
French President François Hollande paid homage to French sailing, which posted a series of spectacular results in 2016-2017.

Le Cleac' and Coville received the recognition following outstanding achievements in offshore sailing. Le Cléac'h won the Vendée Globe in 74 days and 3 hours and Thomas Coville smashed the solo round the world record in a time of 49 days and 3 hours.