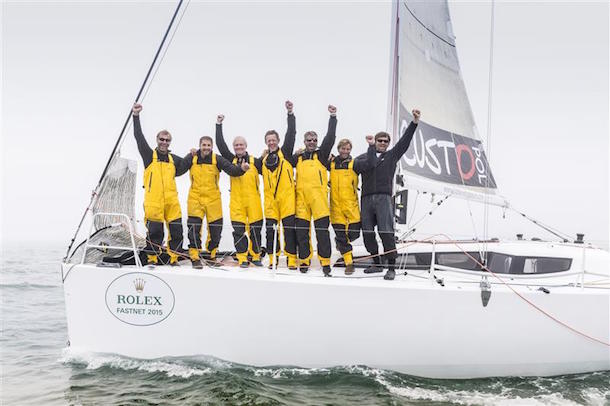 Géry Trentesaux’s JPK 10.80 Courrier du Leon from France has been confirmed as the overall winner of the 2015 Rolex Fastnet Race joining a long list of great names to have won this legendary 603-nautical mile offshore race.

It is a particularly significant victory for Trentesaux; not only did his crew prevail from a record 356-strong international fleet, they did so on the year of its 90th anniversary. At today’s final prizegiving held at the Rolex Fastnet Race village in Plymouth, the 56-year old Frenchman and his 6-strong crew received the warm applause and admiration of their fellow competitors when the claiming the Fastnet Challenge Trophy and Rolex timepiece as overall winner of the race on IRC handicap.

Courrier du Leon becomes the sixth French yacht to win the Rolex Fastnet (following Pen Duick III in 1967, Mordicus in 1981, Whirlpool-Europe 2 in 1999, Iromiguy in 2005 and Night and Day in 2013) and continues a recent trend of French dominance at the race. In 2013, eight of the ten boats on IRC handicap hailed from France, in 2015 the figure currently stands at seven of the top ten. It is the third French victory in the past six editions.

“Foggy, foggy, typical British summer time,” joked Trentesaux after crossing the finishing line in the Plymouth drizzle and mist on Thursday morning after 3 days, 22 hours and 32 minutes at sea. After establishing themselves as leader on IRC handicap, Courrier du Leon had to wait until Friday morning to discover if any of their rivals still on the course where able to register a faster corrected time. Alas, their efforts were futile.

Trentesaux claims victory in his 13th Rolex Fastnet Race some 38 years after his first on a Nicholson 51 in 1977. “It is incredible to win this race. Our main objective was to win Class 3,” he explained. “I’ve tried to imagine and compare how it feels. It is like winning the 24 Heures du Mans. It is a mythic race, probably the most famous race in the world. For the crew it is incredible, I’ve had the same crew for 20 years, some were nearly babies back then!” Courrier du Leon made a poor start to the race, crossing the start line off Cowes too early and losing over 40 minutes restarting. “It is not important how you start, but how you finish,” reflected Trentesaux.

Monohull line honours was claimed by American Jim Clark’s 100-ft Maxi Comanche, arriving in Plymouth on Wednesday morning in an elapsed time of 2 days, 15 hours, 42 minutes and 26 seconds. A time which was 21 hours off the existing race record but a proud achievement considering the level of competition she faced from the fleet’s other Maxi yachts and notably George David’s 88-ft Rambler which finished a mere four minutes behind.