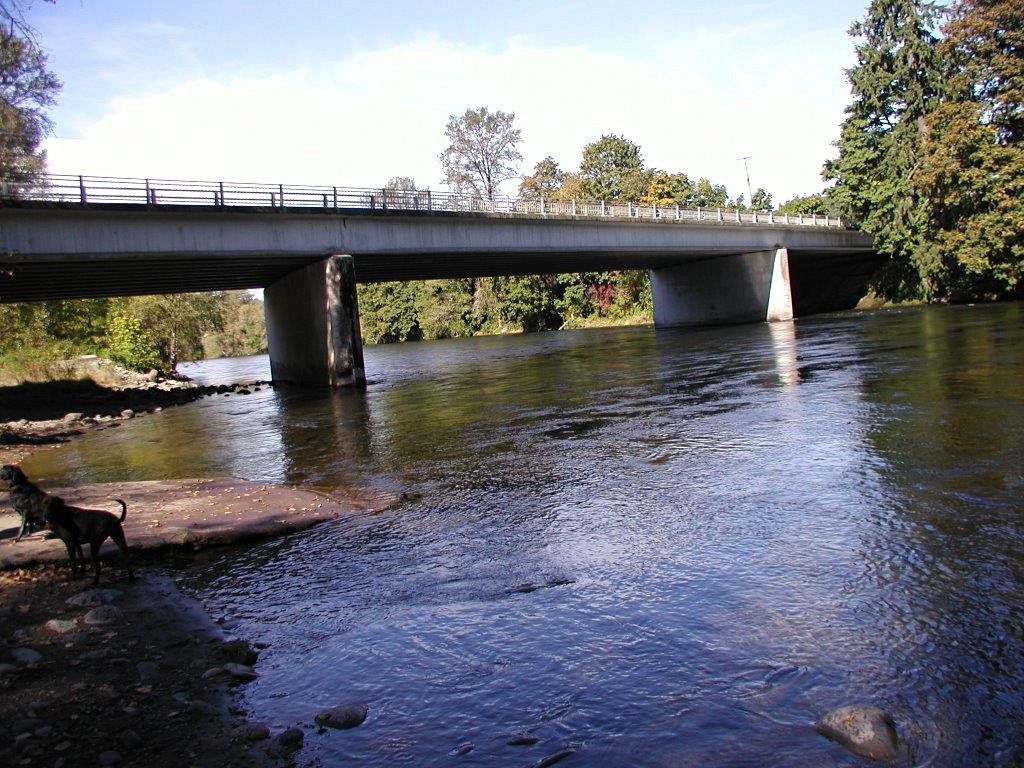 Dangerous? Depends on your lawyer. The North Santiam near Mehala

An Oregon couple who sank their brand-new kayaks on the North Santiam River two years ago are now seeking nearly half a million dollars in damages from Dick’s Sporting Goods, the retailer that sold them the boats.

Bryan Orrio and Keeley McCallum bought a pair of $500 Old Town Trip 10 kayaks on May 6, 2016, and promptly sank them in a Class II stretch of the North Santiam River. Now they have filed a lawsuit claiming the kayaks were “dangerous” and “defective,” according to a lawsuit filed in Marion County Circuit Court.

Orrio, who perhaps not surprisingly is an attorney, and McCallum took the 10-foot rec kayaks to the Santiam River near Mehama, Oregon for their maiden voyage. No sooner had they begun to paddle when “water poured into the kayaks and the vessels started to sink,” the Statesman Journal reported, citing the lawsuit. “McCallum scrambled to salvage items sent adrift in the river and navigated her sinking boat back to the shore.”

As McCallum cleaned up her yard sale and limped to shore, Orrio and his Old Town went full Titanic, rapidly taking on water and drifting toward a Class II rapid. According to the complaint, Orrio was “forced to swim and struggled against the current to pull the kayak and oar to the mossy rocks on the opposite shore.”

An “oar” is what people who know nothing about kayaking call a “paddle.”

The word choice alone suggests strongly that Orrio and McCallum had no idea what they were getting into. Their new Trip 10 kayaks were not appropriate for whitewater of any sort, even the relatively moderate Class II rapids on that stretch of the Santiam.

According to the complaint, a Dick's employee who claimed to be a seasoned kayaker told them the foam flotation blocks installed in the kayaks were in fact packing material. The sales rep and another Dick's employee then removed the flotation blocks in the store.
That's right. They got down on their knees with a knife and screwdriver and painstakingly tore out the kayaks' lone half-hearted concession to swiftwater safety. Did that cause the kayaks to fill with water and Orrio to swim? Probably (almost certainly) not, but that doesn't make Dick's any less negligent.

With or without the foam blocks, these were the wrong kayaks to take on moving water. They have gaping wide cockpit openings and no bulkheads. The foam block may have kept Orrio's boat from sinking completely, but it wouldn't have kept water from pouring in or prevented him from capsizing.

The lawsuit alleges the effort of wrestling their water-logged kayaks to shore caused permanent injury to both Orrio and McCallum. Orrio sustained a herniated disc with a fragment, a disc protrusion, lumbar strain and an injured shin. McCallum strained her neck, back, right shoulder and right knee, and experienced headaches, altered shoulder movement, torn tendons, shoulder pain and stress fractures in her vertebrae.

Orrio is asking for $4,573 in actual medical expenses and $60,000 in anticipated medical costs, plus $250,000 for his pain, suffering, emotional distress and disruption in normal activities. McCallum wants $15,000 for medical care and $125,000 for pain, suffering and emotional distress. They also want a full refund for the kayaks. All told, they're suing Dick's for $455,199.

We won't handicap the legal case, because a paddlesports media outlet opining on a lawsuit is kind of like a box store selling kayaks. And if this lawsuit proves nothing else, it's that people should stop shopping for kayaks at box stores.