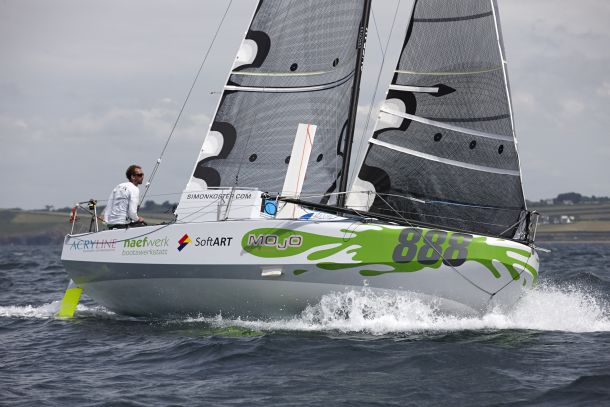 The 2015 Mini Transat îles de Guadeloupe will be no different to previous editions in being a true laboratory for the latest developments in yacht design whose adoption will depend on how well they work and how practical they are. We look back on a race that is continually evolving.

Twin daggerboards, planing hulls, asymmetric spinnakers, carbon masts… These innovations were all tested for the first time on the boats of the Mini Transat. There is endless discussion on how the race and its technology have evolved – some innovations are adopted immediately while others get left by the wayside. We look back on some of the endless design and technical evolutions over the years.

Contrary to popular belief, there have been true prototypes on the start line since the first Mini Transat in 1977. Mini sailors have always  been obsessed with designing boats that sail well downwind because of the Trade Winds and particularly in the early races when only the second leg counted towards the results.

With this in mind, Kasimierz Jaworski came up with a rig that included two genoas on two different stays, imagining this might be more efficient than the traditional headsail and mainsail arrangement. While this option was soon abandoned when the elapsed times for both legs of the race began to count towards the overall results, the twin headsail arrangement was subsequently adopted on a number of boat whose adventurous skippers found that they were a good way of negotiating the trade winds efficiently.

Similarly, since the very first Mini Transat, many of the boats adopted twin rudders, which today is the norm. Movable ballast, considered mandatory today, was first used in the second Mini Transat. The winner, American Express, used this, causing great debate at the time as many felt it was not in line with the race ethos.

Today we see many cruising yachts using asymmetric spinnakers with bowsprits, an innovation that Michel Desjoyeaux pioneered in 1981 on the Faroux design he had customised with the help of the CDK boatyard.

Hulls: The victory of power

The debate has now finally been settled. Gradually as the race has evolved, the hulls of the boats, both the custom built ‘Protos’ and the one design ‘Series’ boats, have become more powerful. The evolution has come hand in hand with materials developing: compared to the first glassfibre hulls, modern carbon fibre ones are now more rigid, reliable and above all lighter. Attempts to use other materials have come to an end.

In 1977 Daniel Charles attempted to go down the ULDB (Ultra Light Displacement Boat) route with a very light and narrow hull, which would reduce water resistance and save weight. Gilles Brétéché tried to follow this path in 1991: One of his boats finished 2nd with Patrice Carpentier at the helm. The gains however were not significant enough to compensate for the discomfort on board. Others were less lucky: in 1987 a sailor arrived at the start on a boat named Babouche after its unusual shape: Low in the water and incredibly narrow, it did not survive the race prologue, despite being held in very light conditions.

The Minis have become more and more powerful right up to 1995 when the rules imposed a maximum beam along with capsize recovery tests, which were required as it was becoming apparent that some of the beamiest Minis were more stable upturned than upright. Subsequently David Raison took this further still with his Magnum featuring a rounded Scow-type bow.  The latest one-designs to have followed this trend are the Ofcet and the Pogo 3… although it should be remembered that the first one-design ‘Series’ boat created for the Mini Transat, the Coco designed by Philippe Harlé and Alain Mortain, already had rounded bow elements.

It was a certain Yves Parlier, a trained composites engineer, who first decided to use a carbon mast on his Aquitaine Proto. Similarly designer Sébastien Magnen, two-time winner in 1997 and 1999, changed from using traditional metal rigging to the composite rigging (in this case Vectran), now used on practically all racing boats.

At the conclusion of the Mini Transat îles de Gaudeloupe, the Mini rules will see a big evolution as the use of lateral foils will be allowed for the first time so opening the design challenge to a whole new number of possibilities. We have already seen asymmetric daggerboards, single canting central canards and keels that can be canted laterally or moved fore and aft. The introduction of these new appendages is already heralding a revolution in yacht design. Who knows if tomorrow we will not be seeing Minis that fly above the Atlantic?