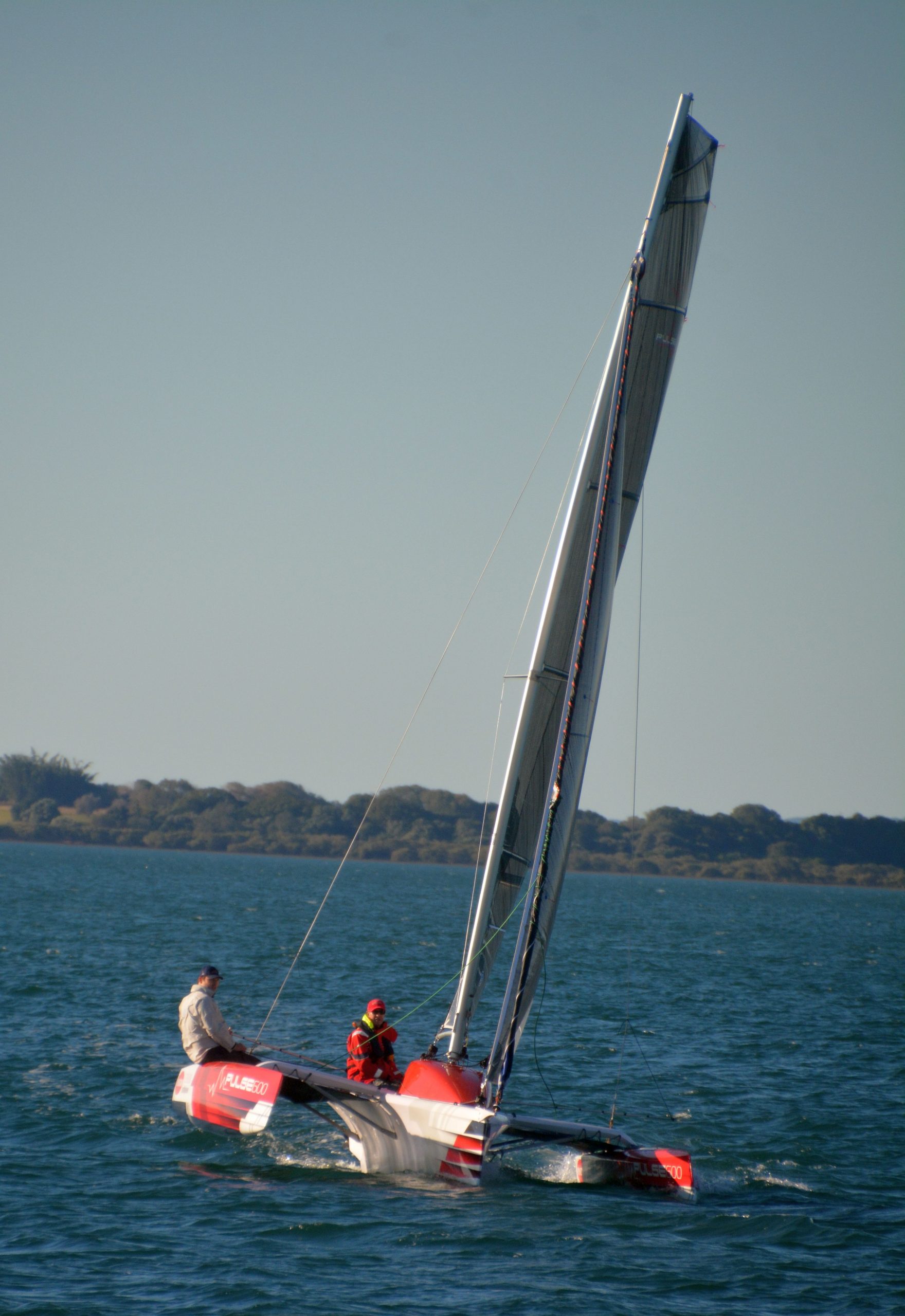 The vinyl wrap is available in a variety of colours and makes the Pulse 600 stand out on the racecourse. Photo Roger McMillan

When I caught sight of the fire-engine red Pulse 600 at Sanctuary Cove, my first reaction was “wow.” We all know red things go faster than other coloured ones, but the Pulse's sleek design screamed “sail me.”

Fortunately, I got that chance on Moreton Bay when I took the demonstrator model for a spin in ideal conditions – the winds were gusting to around 12 knots off the land so the sea state was very kind.

I stowed my camera and shoes in the hatch beneath the bright red cowling. Australian importer Brent Vaughan of Multihull Central pointed out that the cowling can be ordered in one of four colours (blue, yellow and grey being the others) along with the optional vinyl wrap that makes the boat stand out so much on the water.

I quickly saw that there was enough room on this little boat for some camping gear if you wanted to stay overnight. If you're going solo you could drop an airbed under the cowling and sleep there, you could enjoy the comfort of the trampoline if there were two of you, or bump her up to the beach and go ashore with your tent.

You would get an eski, a camp stove and bit of food and drink under the cowling or in the lockable hatch too.

The boat can be sailed single-handed, is ideal for double-handing and can easily accommodate a family of four or even five, if the kids are small.

But I think if I owned one of these slick little beasts, I'd probably spend most of my time just belting around the bay and enjoying the speed.

She's very easy to handle and like all multihulls, slows down quickly when you point her too high but lifts her skirts and scoots away again when you get your trim right.

Sail handling is also very easy owing to furlers on all sails. The main on the demo needs a stiffer bolt rope, but all new boats will be supplied with this minor matter fixed. The main is small enough to handle easily but large enough to give the boat her drive. At the end of the day, you simply wind a handle at the mast and furl the sail around the boom for storage.

The traveller track is curved to enhance sheeting angles and there is plenty of purchase and good cleating points for all sails. Not that you would want to cleat them down – it's much more fun to play with them constantly to maximise boatspeed.

There is a well-proportioned jib which cleats at the base of the mast and a decent-sized asymmetric spinnaker on a furler, which attaches to the end of the prodder. The factory is currently considering a bigger spinnaker, which if supplied will become standard to maintain one-design integrity.

Downwind the boat fairly flies, quickly accelerating to 12 or 15 knots in the gusts. There is no need to furl the jib as the three sail combination is well-balanced and easy to trim.

When you finally furl the spinnaker and turn upwind, you will be surprised at the angle you can sail. I'm a mono sailor primarily and as usual tried to point a little high. But once I remembered my multihull manners and bore away to get boatspeed, I was impressed how easily I could edge up to windward and make good progress towards our objective.

We had run quite a distance downwind while enjoying the kite, but two long tacks took us back to the “mother ship” in no time at all. There were no instruments on the demo boat, but I'd guess we were pointing at about 45 degrees or slightly better most of the way.

While camping or hooning are two options with the Pulse, the other is definitely one-design racing. A fleet of four, all different colours, sailed at the Multihull Solutions regatta and the following Phuket Race Week in Thailand this year.

At the first regatta they experienced winds of up to 35 knots and the owners reported that they were reefing at around 20 knots. Roller reefing on the boom makes this task easy.

At Phuket the conditions were much lighter, with winds of 5 to 15 knots. For the record, the red one, sailed by Andrew De Bruin and Zam Bevan, kept the colour myth alive with a scoreline of 2,1,1,2,1 to beat Dirk Weiblen's Blue (1,2,3,1,2) by a single point after the drop. Yellow was third and Grey was fourth, just in case you're superstitious.

One of the sailors commented that up wind “on occasions we were pointing higher then the bigger multihulls and were hitting the top mark before the 30ft firefly class.”

Three Pulse 600s have already been ordered for Australia, making a one-design fleet of four, including the demo. They will be zipping around showing off their bright colour scheme at a regatta near you this summer.

The hulls feature carbon reinforcing for strength and light weight. The sails are carbon, even the composite cassette rudder is carbon but to keep costs down, the spars are aluminium.

Looking at the reverse angle on the wave-piercing bows, I was immediately reminded of the almost identical angle on the huge AC72s that competed in the last America's Cup. Design trends travel fast!

Auxiliary power might not be needed as the Pulse is easy to sail in confined spaces, but the demo model has a 2hp outboard that lifts up out of the way when sailing.

Back at the RQYS marina, there was another surprise in store. Host Phil Day whipped out a spanner, disconnected four bolts and folded the amahs (that's a fancy trimaran name for the floats on the sides) against the side of the main hull. If you're feeling adventurous or in a hurry, you can actually motor around the marina with the amahs folded and can deploy and retrieve them “on the go.”

Fully loaded on the trailer, the boat weighs about 750kg, making it trailable behind most four cylinder family cars. This one was going on to the hardstand so we didn't need to drop the mast, but I'm told that's an easy task too.

Phil says 10 minutes gets the craft in the water, rigged and sailing, and the same amount of time at the end of the sail has her packed away again.

This is a boat that ticks lots of boxes. Corsair has built more than 2000 trimarans of various designs and the Vietnam factory has a good reputation on quality. The Pulse is receiving rave reviews around the world and already has “Boat of the Year” nominations in Europe.

The versatility of use is very appealing, with the options of camping, having fun and strictly enforced one-design racing.

This is not a boat that will be used for a while then left at the boat park for months on end. Because it is easy to tow and quick to rig, and so much fun to sail, I'm confident we'll see fleets popping up in all sorts of areas from Perth's Swan River to Port Phillip Bay, on Sydney Harbour, Pittwater, Moreton Bay, the Whitsundays… anywhere there is a boat ramp and a bit of wind. ✵